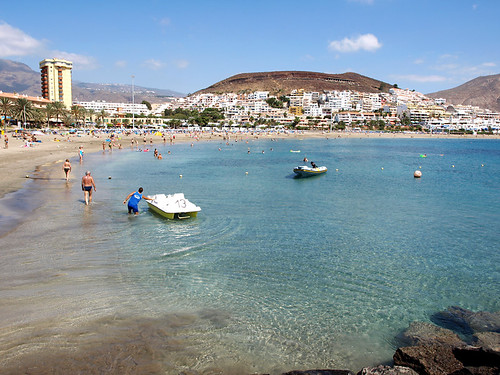 Another Beach Festival for Las Vistas?
You wait ages for a beach festival and then what happens? Two come along at the same time. After last week’s announcement about the replacement for the Son Latinos festival comes news that two entrepreneurs have put forward a proposal to hold a series of beach festivals called Son del Atlántico. The “˜eco-event’ would feature aspects of previous festivals like Son Latinos and Aguaviva and would culminate in a massive concert on either, or both, Las Canteras beach in Las Palmas or Las Vistas in Los Cristianos. Like the festival mentioned last week we’ll have to wait to see if the Canary Government give the proposal the green light. It’s unlikely that two major beach festivals will get the go ahead”¦still even one would be nice.

Tenerife’s Other Saint
This week the body of a 280 year old nun was put on display in the Santa Catalina Convent in La Laguna attracting 50,000 visitors”¦but why? Sor MarÃ­a de Jesús was born in El Sauzal in 1643 and in the 87 years she lived performed at least 1251 miracles across Tenerife – and that’s only the ones that have been documented. The miracles mostly involved worshippers regaining health after coming into contact with Sor MarÃ­a and even after her death the miracles continued”¦hence the 50,000 annual visitors when the nun’s remains are annually put on display to the public. It may seem incredible in this day and age but every year hundreds of Tinerfeños report improvements to their health after visiting the nun.
A couple of years ago an application was made to Rome to have Sor MarÃ­a beatified, but there’s still no word whether the miracle-working nun will join Brother Pedro on Tenerife’s saintly roll call.

Internet”¦what internet?
Despite playing host to millions of people who have arrived on their shores thanks to finding out information and booking their holidays online, Canarios are woefully behind even their fellow countrymen when it comes to using the internet. A study by Spain’s Electronic Business School discovered that Canarios were almost at the end of the line when it came to using the internet to make purchases. Only 11% of Canarios utilise the internet as opposed to 24% of Madrileños and 22.6% Catalonians. Funny ““ there seems to be a parallel when it comes to football as well. Reasons given for the lowly showing were mistrust and ignorance.

Work on Los Gigantes Beach Begins
It’s official, the work to make safe the cliffs above Los GuÃ­os beach began at the end of last week. It really does look as though visitors to Tenerife will be able to throw down their towels and enjoy soaking up some sun on Los Gigantes’ beach by Easter”¦just as the British high season is ending. Unlucky guys.

Puerto’s New Port is Still a Car Park
Anyone with one of those maps for Puerto de la Cruz that for 30+ years has labelled the harbour car park as futuro parque marÃ­timo won’t need to swap their map for a new one quite just yet. Work to begin the development of the proposed new harbour, marina and sports development that politicians claim will transform the town’s fortunes has been put on hold yet again by the Directorate General of Coasts due to technicalities. It would seem the futuro parque marÃ­timo is going to remain a pipe dream for the moment.

And finally the TIT (This Is Tenerife) of the week award goes to the Island Connections newspaper for recent reports about walkers on Tenerife.

A few weeks ago the English language paper published a report about walkers ignoring the Barranco del Infierno’s closed signs and attempting the popular walk anyway.
Whilst it is responsible to bring potential dangers to the attention of visitors and residents to Tenerife, it’s probably more credible if it’s done in an informed way. To accuse people of having “”¦a level of ignorance or stupidity that beggars belief,” and asking who will be blamed if someone “”¦loses their life attempting an unguided walk,” is in the first part insulting and in the second betrays a complete lack of understanding regarding what walking on Tenerife, or anywhere for that matter, actually involves.
The Barranco del Infierno is one of the very few natural areas on Tenerife where walking is controlled. Everywhere else involves – shock, horror – walkers generally heading off under their own steam, often along paths that are nowhere near as neat and maintained as the Barranco’s. It’s called interacting with nature and every experienced walker is aware of the risks involved.

An experienced local walking guide sent a wonderfully balanced, but clearly irritated, response to the article and all credit to the paper they printed it. But then let themselves down in their next edition by running another biased article about irresponsible walkers.

Tenerife is quite rightly being strongly promoted as an ideal walking destination. To single walkers out for journalistic abuse is a rather strange approach. What next – swimmers, windsurfers, kite-boarders, cyclists, runners, footballers and anyone else who puts themselves in danger by undertaking some sort of physical exercise?

A 2-1 Home Win Over The Leaders, A Love Supreme For CD Tenerife