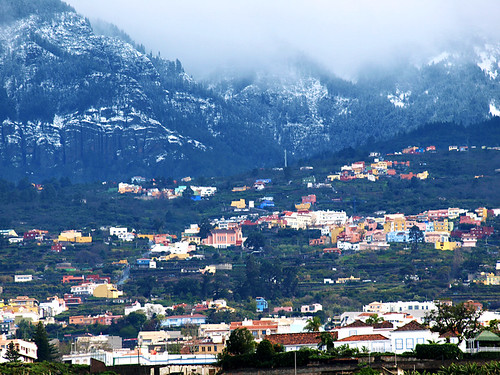 Snow on Tenerife
Snow on Tenerife at this time of year isn’t really a big deal; there can be snow on Mount Teide till June. But when the clouds lifted on Monday everyone was surprised by just how far down the hillside the snow level had reached. Roads through the towns of Benijos and Aguamansa (around the 1000 metre mark) in the north of Tenerife were turned white and snow completely covered the town square in La Esperanza, something that no-one there had ever witnessed previously. As the unusual weather conditions piled up, the south west coast experienced hailstones whilst temperatures at 1800 metres fell to 0c for only the fourth time in recorded history (recorded history doesn’t stretch back that far; the other three times were 1996, 1997 and 2005). Just to top things off rain of up to 73 litres per square metre was recorded in Los Rodeos and Las Mercedes with Candelaria experiencing around 62 litres per square metre. The storm front affected the whole Canarian archipelago and even low lying Fuerteventura felt the force of hailstorms. Not the best week for anyone visiting the island”¦but hang on in there; normal service will be resumed by the weekend.

Driving on Tenerife is Sexy…
… if you happen to be behind the wheel of one of the new Mercedes Benz cars that have added a touch of sleek glamour to Tenerife’s roads during March.
Throughout the month Mercedes Benz have been using the island’s dazzling scenery as a backdrop to showcase their stunning new models to 700 journalists from all over the globe. To be used as a location to officially launch a prestigious new car from the Mercedes Benz stable is quite a coup for Tenerife. Have a look below to see the gorgeous SLK 350 BlueEFFICIENCY in action on some of Tenerife’s equally gorgeous roads.

Carnaval Dates for Tenerife for 2012
Okay we’re all still yawning due to the excesses of Carnaval 2011, but for all of you out there who like to plan in advance, here are the dates of the Santa Cruz Carnaval 2012. The opening parade will be Friday 17 February 2012 with the closing parade being Tuesday 21st and Burial of the Sardine Wednesday 22nd February. And just in case four weeks of carnival wasn’t enough to satisfy carnaval junkies, the whole shebang will now last for five weeks with the first event taking place on the 27th January. That means an extra week of murgas”¦deep joy.

Who Wants to Be Michael Jackson?
With the Michael Jackson tribute show Forever King of Pop looking around for a young Michael to play the king of pop in the hit show in La Laguna at the end of March/beginning of April on Tenerife, it would be reasonable to expect the casting director’s office to be flooded with mini MJ look-alikes. But only fourteen potentials turned up. The casting was announced on the show’s website but as it was in Spanish only maybe it was missed by non Spanish-speaking residents. Or perhaps there aren’t that many children on Tenerife who look like a young Michael Jackson who can sing and dance to a professional level as well.

Pick up a St Patrick’s Day Bottle of Jameson Irish Whiskey on Tenerife
Jameson’s have released a specially designed bottle of their whiskey just for St Patrick’s Day. The unique bottle, designed by Irish artist Paul Daly, has a Celtic music theme and is only available in travel related outlets during March. These include airports such as Rome, Heathrow, Paris Charles de Gaulle and”¦yes, you’ve guessed it ““ Tenerife South.

And finally the TIT (This Is Tenerife) of the week award goes to”¦ Al Campo supermarket for not keeping its Caja Verde till manned full time.

It represents a step forward to see Tenerife supermarkets adopting environmentally friendly measures by introducing special “˜green’ tills that can only be used by customers who bring their own bags or use the store’s recycled ones (incidentally, Carrefour’s also look great). Al Campo introduced green tills some time ago but lately their La Orotava branch seems to have sacrificed the manning of the till on a regular basis. It begs the question what’s the point of introducing environment saving measures if you don’t commit to them 100%? Make a sentence out of the words lip, service and paying. Green tills should be the first tills that are manned in a supermarket, not the last.

The Carnival is Over, Tenerife’s Crazy Week of Fun in Pictures

Where on Tenerife is this? Photo Challenge #3 2011