There’s an extra bit of local interest for CD Tenerife fans in today’s Paraguay v Spain game. Not only is Pedro, the boy from Abades, on the Spain bench hoping to come on for some goal glory, the Paraguay coach Gerardo Martino is a former Santa Cruz player. The mastermind of this Paraguay campaign played 15 games for CD Tenerife in 1991, I”M sure he remembers it fondly. 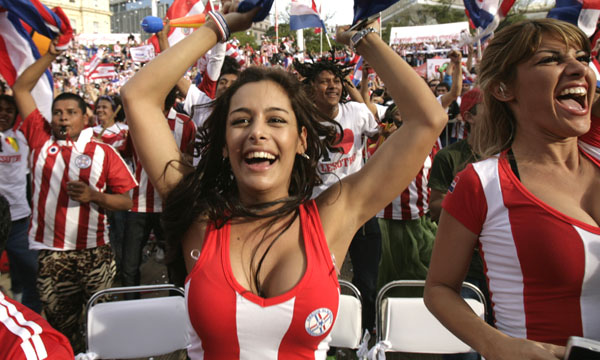 She has become the “face” of the World Cup, Larissa Requelme is a top model in Paraguay and always seems to catch the camera mans eye a she celebrates on the terraces with their army of fans. The young lady, who famously keeps her mobile phone tucked in her cleavage, has promised that if Paraguay make the semi finals she will do a full strip. That’s something to look out for, John Motson may even lose interest in his endless stats and take an interest.

Harry Bungs In A Good Delivery

The pundits are all jostling for top billing but Harry Redknap leads the way with the best one liner so far. After Japan midfielder topped a great game with a stunning free kick, Harry’s BBC colleagues teased him that he would have the cheque book out and be making a bid. The Spurs boss quipped back with “yes i was thinking of doing a swap , Honda for Bentley” David Bentley being one of his out of favour strikers.

Calls From An Offside Position 4 – The Final Whistle

Germany And Uruguay, They Saved The Best For Nearly Last

Klose And A Big Cigar, Villa Gets Spain Out Of Spot Of Bother