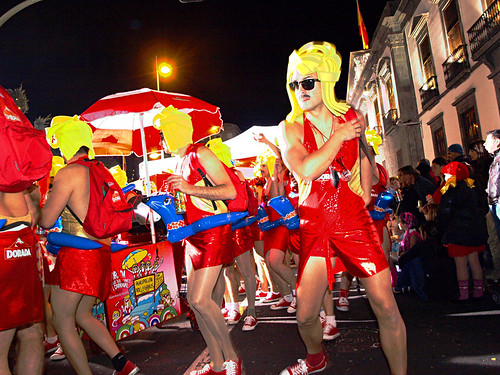 Choose the Theme for Carnaval 2013
We know it seems like only yesterday when grizzled blokes with beards were checking that their stocking seams were straight but plans for Carnaval 2013 are already taking shape and this year you could be part of them. For the the first time Santa Cruz city council are asking the public to choose the carnaval theme. On Monday six potential themes were decided and these have been posted on the official Santa Cruz carnaval website and the corresponding Facebook page. The choices are Bollywood, cartoons (los dibujos animados), Africa, the sea, carnavals of the world and the Olympics. All you’ve got to do is make your choice and start working on your costume hoping that everyone else is thinking along the same lines. The site is in Spanish but it isn’t difficult to cast your vote even if your grasp of Spanish only runs to ‘gracias” and ‘dos cervezas por favor’. At the moment ‘cartoons” is out in front with 30% of the vote. There are enough Mickey Mouse operations on Tenerife as there is, so maybe a change would be novel. The poll closes on May 6, so get your vote in now.

Eating Fast Foot is Depressing – Official
At least it is according to a six year study carried out by Las Palmas University. Out of a test group of 10,000 initially healthy people, the study discovered that those who had a daily dose of fast food were more likely to experience depression. This was attributed to the presence of hydrogenated fatty acids in junk food. These fatty acids are used to enhance texture and flavour in mass produced commercial fast foods and are associated with an elevated risk of cardiovascular disease which, according to the study, increases the likelihood of depression. It’s not really the result you expect when you place that order for a ‘happy meal’.

And finally the TIT (This Is Tenerife) of the week award goes to”¦ Gran Sur Cinemas
A group of Brits arrive at a location in good spirits and with high expectations to discover what awaits them doesn’t exactly match the promise of what had been ‘sold’ to them online. This might have been the plot of The Best Exotic Marigold Hotel which was advertised as the English language movie at Gran Sur Cinemas in Costa Adeje… but it also applied to those who turned up to watch The Best Exotic Marigold Hotel. Despite initially being advertised on Gran Sur’s website (mysteriously disappearing later), staff at Gran Sur told disappointed movie-goers that there wasn’t an English language movie and that there had never been plans to screen The Best Exotic Marigold Hotel in English. Must have been a mass hallucination then. There’s a lesson to be learned here by Gran Sur; if something doesn’t pan out as planned, let people know, they will accept it. Do not try to pretend it didn’t happen ““ there’s this little thing called the internet you see…