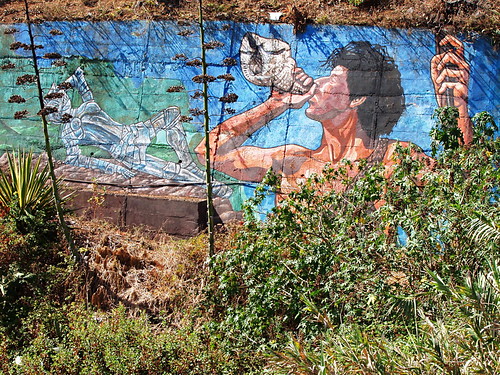 The Battle of Acentejo
It’s worth remembering that just over 500 years ago this week, the primitive Guanche inhabitants of Tenerife, armed with little more than sticks and stones, went medieval on the Spanish conquistadors (aka mercenaries) with their more advanced weaponry and beat the hell out of them on the slopes of Acentejo near La Matanza (the massacre in English). The victory was celebrated as usual by a series of Guanche-themed events in the area on Sunday. It was an incredible feat and a real David versus Goliath scenario. Anyone who passes La Matanza on the TF 5 can clearly see from the image on the huge mural at the entrance to the town where local allegiance lies. The conquistadors returned a couple of years later to wreak their revenge at neighbouring La Victoria (named after the result of that particular battle). Interestingly that event isn’t celebrated quite as much.

The Sunshine City
At last the troubled waters of Parque MarÃ­timo are once again calm. This Friday the swimming pool complex will open its doors to Santa Cruceros, cruise passengers and anybody else who wants to swap the city’s hot streets for a sun lounger. The complex has had a complete refurbishment and is looking all shiny and new in time for the summer. Parque MarÃ­timo opened at the same time last year but, unlike in 2010, this time it actually is finished and all the pools are ready for some serious swim and sun action.

In Times of Crisis Hand Out Gold Medals
Paulino Rivero, the Canarian President, spoke this week of the need for politics to recognise the efforts of the workers and businesses who are helping to move the Canary Islands out of economic crisis. He then went on to award Gold Medals to Canarians who exemplified a philosophy of collaboration and hard work. Two of the recipients were footballers David Silva (Manchester City) and Pedro Rodriguez (Barcelona), two players who have enjoyed exceptional success with their clubs this season…away from the Canary Islands. Unsurprisingly there was no mention of anyone from CD Tenerife receiving an award. Maybe the message Snr Rivero was sending to Canarios was, if you want to achieve – leave.

Adios Miami
For the last couple of years, Tenerife residents have been able to fly directly to Miami between June and October. However, Air Europa have decided not to continue the service in 2011. The airline company have announced that people on Tenerife can still fly to Miami…via Madrid; not really quite as appealing as a direct flight.

If You Go Down to the Woods Today…
Walking in the hills on Tenerife may result in surprises that involve more than discovering views that take the breath away as a young walker found this month. Spying a cave entrance in El Rosario he decided to have a look inside…and discovered some Guanche bodies. Scientists believe the site was a burial cave. There are undoubtedly lots more similar sites waiting to be discovered in Tenerife’s many ravines. If you happen to be the lucky person who stumbles over some primitive, mummified cadaver the official advice is to contact the authorities and not to touch anything. Pity, a Guanche mummy on the wall would make a great party conversation piece.

And finally the TIT (This Is Tenerife) of the week award goes to…Puerto de la Cruz…again.

We’re not deliberately targeting the Ayuntamiento (town council) of Tenerife’s first tourist resort but after sifting through news items desperately hoping to find a different candidate for TIT of the week, there were none that came close to the jaw-dropping exploits of a local authority that seems to have completely lost the plot. This week Puerto de la Cruz was informed that its main beach of Playa JardÃ­n had lost its Blue Flag status. And the response from Puerto’s council?

They were completely perplexed as to why the Blue Flag status had been taken away because, as far as they were concerned, nothing had change since last year when Playa JardÃ­n was still deemed a Blue Flag beach.
“Nothing had changed’ – that’s exactly the problem and a major clue to what is going wrong in Puerto de la Cruz at the moment ““ inactivity seems to be the council’s main policy.