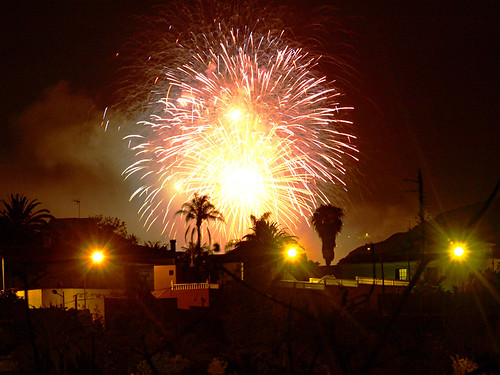 An Explosive Community Spirit
Those fortunate enough to have seen the wonderful annual firework display in Los Realejos on the evening of May 3 witnessed something a lot more impressive than a mind blowing pyrotechnic extravaganza; they witnessed a display of harmony (despite the fact the display has its roots in neighbourhood rivalries) and pride amongst the people of Los Realejos that deserves to be acknowledged and applauded. The whole display and the beautiful decorations on 300 of the municipality’s crosses is funded totally by residents, not a centimo comes from public funds. As soon as the display is over the fund-raising begins again to ensure the tradition continues. So if anyone passes Los Realejos way during a fundraising event try to take the opportunity to donate, it’s a wonderful and very special tradition whose publicity benefits all of Tenerife.

Bollywood Comes to Tenerife
It’s official, the theme for Santa Cruz ‘Carnaval’ 2013 will be Bollywood ““ the choice of the people. For the first time chicharreros were able to pick the theme of their carnival by voting on social media channels such as Facebook and 42% opted for what should be a perfect choice for a lively and vibrantly coloured carnival.
Santa Cruz Mayor, José Manuel Bermúdez voiced his approval for the people’s choice by saying it was particularly ‘special’ because of the sizeable Indian community in Santa Cruz who have been an important part of commerce in the city for generations. We’re with José, Bollywood is perfect for carnival and gives us an excuse to dig out Slumdog Millionaire again to check out some of those dance moves.

It’s Good to Talk
This week a small ceremony in Santa Cruz celebrated an event that changed Tenerife and the Canary Islands forever 129 years ago ““ the arrival of a telegraph cable that linked Tenerife with Cádiz providing a link with the outside world for the first time that meant news wasn’t weeks or even months old by the time it got to the islands. And where did this liberating cable come ashore? It was at Los Silos where there’s still an anonymous little hut marking the spot.

Third World or Modern Day Europe?
It seems incredible in this day and age but 2,500 residents of Puerto de la Cruz have been without drinking water for 12 days and no-one is able to say when their tap water will be given the all clear. There seem to be some inconsistencies about the cause of the contamination relating to a reservoir cover collapsing and falling into the town’s water supply. An “It’s complicated” statement from the water authorities didn’t really help clear up the mystery. The areas still affected are San Antonio, Las Aronas, Taoro and Las Dehesas. Officials say there isn’t a serious health issue otherwise the supply would have been cut off completely. But come on guys; 12 days without drinking water in Europe in 2012? It’s time to wipe out this buffoonery.

CD Tenerife on the Up?
Good news for CD Tenerife fans at last. This week the team secured a play-off spot so fingers crossed they can actually give their loyal fans something to cheer about at the end of a tumultuous season.

And finally the TIT (This Is Tenerife) of the week award goes to”¦ Loggers in the Anagas
You’ve got one of the last remaining ancient luarisilva forests on the planet so what do you do? You chop some of it down. Well you do if you’re a complete no-brainer with no love or respect for your island and its natural beauty. Thankfully forestry agents rumbled the unofficial logging operation around the El Bufadero area of the beautiful Anaga Mountains and have put a stop to it but not before an area of 2,000 square metres was affected.