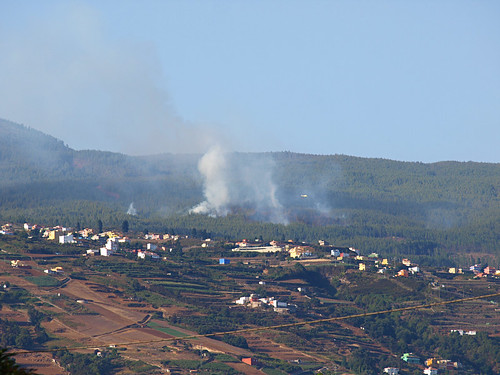 Did the earth move for you?
Has someone placed a curse on Tenerife? Following last week’s forest fires, nature kept Tenerife’s inhabitants on their toes by giving the island a bit of a shake in the early hours of Sunday morning. Three earth tremors of 3.8, 2.8 and 2.6 on the Richter scale were felt all across the north of Tenerife resulting in 1,250 panicky calls to the emergency services.
The source of the tremors was 27 kilometres below the ground in the sea north of El Sauzal and Tacoronte. Coming after the forest fires, the tremors that rocked Tenerife’s world received more attention than normal and subsequently there was some nonsense spouted around the web.
However, experts insist that there is nothing unusual about the tremors; basically, these are volcanic islands and these things happen. Nothing to be concerned about.
There are minor tremors constantly in the Canary Islands but most of the time people simply aren’t aware of them. In fact in the 10 days before the tremors, there were over 70 tremors in various areas all across Spain. Not a lot of people know that.

Forest Fires on Tenerife
Ironically, just as Tenerife Magazine had finished giving interviews to BBC TV and Radio to help provide an accurate picture of what the situation actually was, as compared to the sensationalist and out of date one provided by some sections of the UK media, more fires broke out on Tenerife. Wildfires flared up in at least three different spots on the same day last week prompting the Canarian Government’s Minister for Economy, Finances and Security to suggest they had been caused deliberately which in turn prompted some newspapers to print headlines saying there was an arsonist on the loose on Tenerife. The clearly perplexed minister made the comment before the smoke from the fires in La Orotava, Los Realejos and El Rosario had even dissipated and there was no way he could have known what the causes of the fires were at that point. There was even one wild suggestion that a drugs gang was behind the wildfires. The Tenerife Government on the other hand have been consistent in not pointing the finger until experts conclude their investigations. And that hasn’t happened yet.

And with purely coincidental timing, in Candelaria, at the celebrations in honour of the Virgen de Candelaria, the Bishop of Tenerife gave a sermon that reflected the good (solidarity) and bad (those who caused them) of the fires to the thousands of pilgrims who, despite a prohibition, had walked across forest trails from all over Tenerife to get to Candelaria.

A Bust Up With Binter
You would expect the implementation of new international routes by Canarian airline company Binter to be something to be pleased about. Not if you live on Tenerife, as the new routes only operate from neighbour, and nemesis to some Tinerfeños, Gran Canaria. Tenerife’s Tourism Minister Carlos Alonso is said to be furious about the decision by Binter to fly from Gran Canaria to Lisbon, especially as he says statistics show in the first six months of 2012, more people travelled from Tenerife to Portugal than from Gran Canaria to Portugal. Binter were allegedly unmoved by the rhetoric from Tenerife’s politicians. Whether Binter’s representatives went as far as sticking their fingers in their ears and singing ‘Come fly with me…” to drown out the complaining we really couldn’t say. But they aren’t budging.

And finally the TIT (This is Tenerife) of the week award goes to… Tenerife’s Bioclimatic Houses
ITER’s Bioclimatic houses near Montaña Pelada are a commendable project even if their location, next to an industrial estate, doesn’t seem to fit the picture of the environmentally friendly paradise that you might expect for such a concept.
Reports that mountains of rubbish bags that have been dumped in the area have broken open and the ever present wind has scattered their contents over the land around the houses and the nearby beach can’t have helped improved the vista around these ‘green” holiday homes.
You’d think it would be a priority to keep the area around the houses looking a bit more environmentally friendly and a bit less town dump.
On the other hand, ITER is the centre for promoting renewable energies, so maybe the rubbish is all part of a recycling scheme.