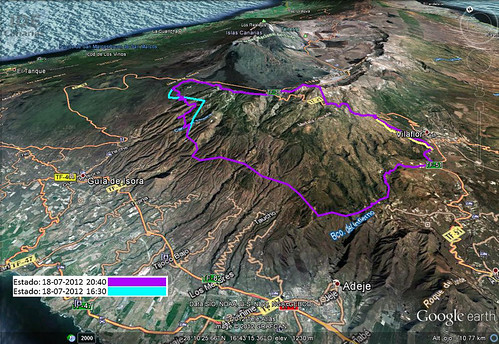 The welcome news that we’ve all been hoping for is that yesterday the Tenerife Government announced the fire was mostly stabilised and although there are still areas that are burning, the situation is positive and conditions look good for its extinction.

Residents of Vilaflor, Tijoco and Ifonche were allowed to return to their homes and most roads have re-opened except sections of the TF38 between Chio and Boca Tauce and the TF21 between Vilaflor and Boca Tauce.

Unsurprisingly, during the worst of the fire, rumours, hoaxes, mistranslations and misinformation accompanied the reports that were flying about the internet.

We thought it might be of interest to cut away all the ‘unofficial’ aspects and provide a brief account of how the fire took hold, spread and was fought, taken only from information provided by Tenerife’s Government.

15 July
The fire started on Sunday around 3pm near Ifonche above the Barranco del Infierno in Adeje. At first it was believed to have been caused by a farmer burning scrub-land but Tenerife’s President Ricardo Melchior commented at a press conference that the source of the fire appeared to be ‘focussed’ but that it was far too early to determine what had been the cause.

At first the fire affected only scrub-land but with tinder-dry terrain the fire soon spread on two fronts, one heading towards Guia de Isora and the other towards Vilaflor. Around 50 residents of Ifonche, Taucho and La Quinta were evacuated as a precautionary measure.

The fire was quickly raised to a level 2 which put the control and organisation in the hands of regional rather than local government. 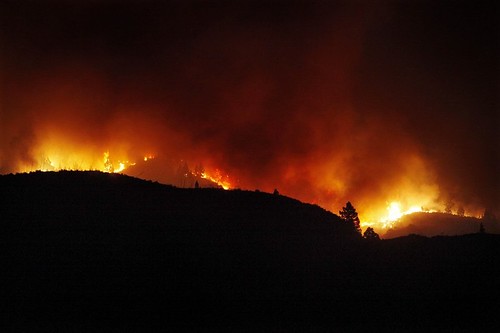 16 July
A heatwave and breezy weather didn’t help the situation and the fire continued to take hold. Five roads were closed (TF38, TF21, TF583, TF585 and TF567) as a team of 500 professional and volunteer firefighters, assisted by seven helicopters, battled the blaze. The heat (temperatures of 35C), 30kph wind and difficult terrain meant that firefighters were unable to bring the fire under control and it continued to march on. Residents of Tijoco Bajo were evacuated and by nightfall 1800 hectares had been affected with the fire destroying about 40-50% of this area.

17 July
The Spanish Government sent three special hydroplanes to assist firefighters as the fire moved towards the outskirts of Vilaflor and reached the boundary of Teide National Park which is part of the municipality of La Orotava (nowhere near the town of La Orotava as was reported in some accounts of the fire).
1800 residents of Vilaflor were evacuated, again as a precautionary measure, and although the hydroplanes made an impact, the fire continued to gain more ground. With the situation looking increasingly serious for Vilaflor, fire-fighting resources were concentrated on that area. It’s important to state at this point that the government were working on the advice of specialist technicians who predicted, as far as they could, how the fire would develop and what areas were at most risk. At all times calculated decisions were made about where to focus resources. By this time there were five helicopters, three seaplanes and 500 firefighters, made up of professional firemen, police, army and volunteers, tackling the blaze.

18 July
The front heading towards Guia de Isora, although more virulent, had almost reached an area of lava fields where technicians believed it would die out whilst the front that had reached Teide National Park burnt out on reaching the barren terrain. The decision to focus on Vilaflor was shown to be exactly right as the fire reached a football field on the edge of the town and jumped defences. With three more helicopters and the army of fire-fighters performing miracles, the night of the 17th and morning of the 18th proved to be the turning point. The fire was held back and brought under control at Vilaflor. With other fronts stabilised, apart from above Guia de Isora, there was finally a glimmer of hope.

Residents of Taucho and La Quinta were given the green light to return to their homes. 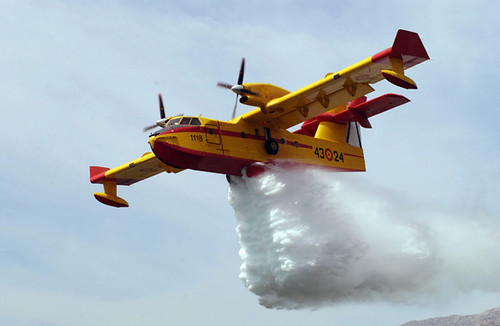 19 July
By the morning of the 19th, the tone of the Government’s press releases was clearly optimistic. The fire was stabilised enough for Ricardo Melchior to thank all those involved with tackling it. More people, including residents of Vilaflor, were able to return to their towns and villages.

Whilst the news is as good as can be expected and the course of the fire has slowed and is burning out on the lava fields as predicted by the technicians, it remains a level 2 emergency and it will take some weeks before the danger is fully extinguished.

The damage caused by the fire is horrendous but not the tragedy it could have been; injuries were few. The perimeter of the fire covered an area of around 5,000 hectares of which about 1,000 of which has been destroyed. It could have been a lot worse.

As well as a superhuman effort on the part of the fire-fighters and support services, the organisation and flow of information during the fire has been excellent and subsequently Tenerife’s press have been able to keep everyone accurately informed and to scorch (maybe not a good word to use) rumours and misinformation.

We’d like to echo Ricardo Melchior’s words of thanks to all those involved. These people are real superheroes.