Like many others, I wish to do the least harm as possible when travelling. As a Master’s student in Sustainable Tourism, I cannot close my eyes to my own ecological and social impact as a tourist, but I also admit that it can be difficult as a consumer and traveller to find locally-based and sustainable places.

I can google one eco-retreat or hotel after the other but to know how things actually work in practice is, in the end, a matter of trust. Therefore, when Canary Green, a non profit company, committed to improving the environmental well being of the Canary Islands first told me about an eco-therapy center located in one of the most touristic places in the South of Tenerife, I was skeptical.

So far, sustainable tourism does not seem to be the highest priority from what I’ve seen in the South of Tenerife, including wellness and retreat centres, so why should this one be any different?

“Welcome to Hacienda Cristóforo,” Lucia Devaris guides me from the outdoor entrance into what feels like a village of carefully carved out stone buildings, ornaments and antique wood. The sun peaks through a palm tree and onto the stone floor, warming our faces. Lucia is the daughter of the Greek architect Denis Devaris who created and designed the eco-therapy retreat center Hacienda Cristóforo.

I walk around in their family home, which has opened its doors not only to guests but also to small ponds with turtles, twittering birds, and butterflies; a small ecosystem inside what otherwise feels like an area of controlled nature and concrete.

“Every house,” Lucia tells me, “is an individual building in itself, each one is built by left-over resources and materials available in the nearby villages — materials that otherwise would have been left on the land to decay. Now they are forming unique surfaces on the houses,” she explains. The retreat centre has become a patchwork of time since Denis bought the land in 1972 and patiently started to built the first house, which initially was only meant as a family house.

One day, as he was in the process of building, two policemen came by and asked Denis what he was doing. “I am building my house,” Denis answered. “Aren’t you scared,” the policemen wondered, “scared of what? Here is no one” Denis said and pointed towards an uneven and rural road, which was the only construction you could see from the house at that time. Today, Denis laughs when he tells me the story and ends it by saying that the police were admiring this strange foreigner coming to this desert to build his house, “but why would I be scared?” he asks me. I asked myself the same question, why should Denis be scared?

Maybe, as the policemen stepped out of their car and walked towards Denis’ house, they saw the land of bare stone and raw volcano and also saw how order and structure were lacking and recognised a need for control. As Denis walked upon that same land, he saw its structure and the potential within it.

Just 60 years ago, the South of Tenerife, Playa de las Americas and the region of Costa Adeje, were not more than a desert between the mountain hills and the ocean. Only scarce patches of vegetation grew on the dry and hard volcano stones. This all changed in the 1970s as the tourism boom brought rapid urban development to the region.

The urban planning of the place formed it into a beloved vacation destination for many people for years to come. “I was hired as an architect”, Denis explains to me, “to come to the Canary Islands and build one of the first hotels in the region.” It was a big project, a building that was supposed to host a thousand guests and included a swimming pool. Today, this may sound like a normal construction in the context of tourism, but at the time this was the first sign of the massive changes that were to come.

That night, I took a stroll in Costa Adeje and walked the streets which Denis must have seen long ago as bare stone surfaces. It is difficult to imagine this place ever being a rural area today as I see the street lamps line the pedestrian streets, now covered in asphalt, with golden cones; and roads separating, connecting, and guiding me in their structure and order.

High above me two Hard Rock Hotels punctuate the skyline; two towers looking over the ocean towards La Gomera. Tonight their windows have closed eyes. After the pandemic outbreak, many of the shops in Costa Adeje are closed or only open for limited hours a day; only a casino still plays hits from the ’80s loudly on the streets this weekend. It is as if music aims to catcall every tourist who dared to go out. Suddenly the city seems too large for its inhabitants, and its structure and order are what is left when the people are gone.

After Denis finished building his family house about 50 years ago, he slowly began building the other houses one by one and with no exact plan or idea in mind. The materials, and the time it took, depended on the things he received from his surroundings, whatever would come his way. Walking through the eco-retreat centre today, it is difficult for me to imagine that this place was not elaborately planned, as the architecture seems to correspond and support each other.

This is maybe due to an underlying principle Denis has of sociability: “Like individuals,” Denis explains, “you can be your own entity in your home either with your family, partner or on your own. But as soon as you leave your house in the Hacienda Cristóforo retreat centre you are surrounded”. Surrounded? “Yes, you are surrounded by nature and the others when you leave your house,” Denis continues, “you may meet the neighbour on the way, but there is a feeling of solitude and community at the same time”. This is a balance that I often doubt can exist in urban spaces. But in nature it does, and this is what this place stays true to.

I continue my tour in Hacienda Cristóforo and stop to talk to Denis’ son Ioannis Devaris who tells me that his father never tried to make the place sustainable as we know it today, that term was not around at that time when Denis started building. “my father just wanted to live a richer life,” Ioannis explains, “he wanted to be more in touch with the environment and the local people, he was looking for space that could provide meaningful interaction. That is what drives this work,” he points towards the community kitchen in the heart of the retreat centre, ”it became sustainable through those values”.

When Denis began building the first big-capacity hotels, he realised exactly what he did not want. Out of a personal need, Denis started building what most of us in an urbanised environment search for today: connection with nature, solitude and healing. What was in the 1970s a value for this architect, is today coined for us as sustainability. This example shows that sustainability is less an academic or politicised term but is a principle that has made the survival of our ancestors possible. It is not a new concept, it is our history. Yet, today it seems to be what it has turned into; those same values of our past.

“How does this place survive the time of a pandemic?” I ask Ioannis, he shrugs his shoulders and replies, “you know, we have always been collaborating and listening to the needs of the people and our surroundings, so when something like this happens we have been quite well-equipped to adapt”. Listening? “Yes, listening. We have three markets; the local market, the international market coming to seminars, and the international market coming to stay.

We are not tied down to one market, so when the international market closed we began focusing more on the local market and have tried to build upon that. Now people are coming here for birthday weekends and celebrations, whereas other nearby hotels have closed due to the collapse of one market — the international”.

Before I leave Hacienda Cristóforo, Denis shows me an eucalyptus tree and explains how it responds to the heat coming from the houses’ roof-tiles. “The eucalyptus tree loves heat, it is a Mediterranean tree,” he explains to me, “so now it bends over the tiles and looks like this”. Here, architecture and nature not only co-exist but also form each other; an adaptation process, which tells the story of many, including our own, species.

Humans have adapted to a variety of surroundings over the years. This made us resilient, made us grow and survive today.  But has this principle been lost in tourism altogether? On my night stroll in Costa Adeje, I look at the city with closed eyes and wish that it will use this time to listen, carefully, to its surroundings; at least to its neighbour Hacienda Cristóforo, as this ecosystem and home should thrive resiliently for years to come. 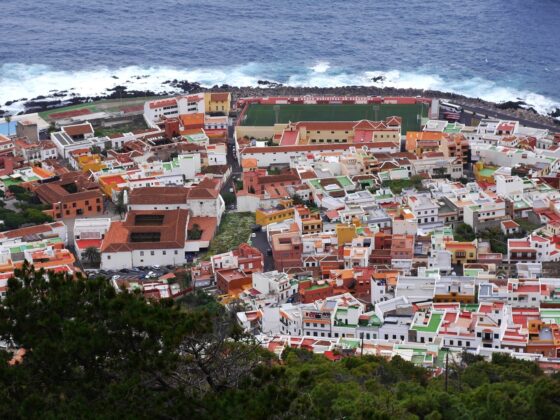 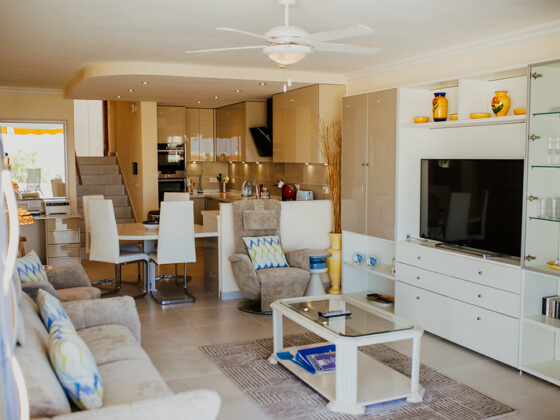 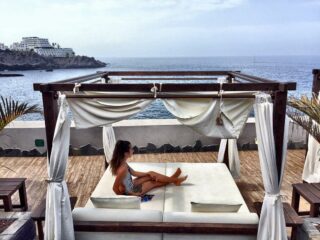