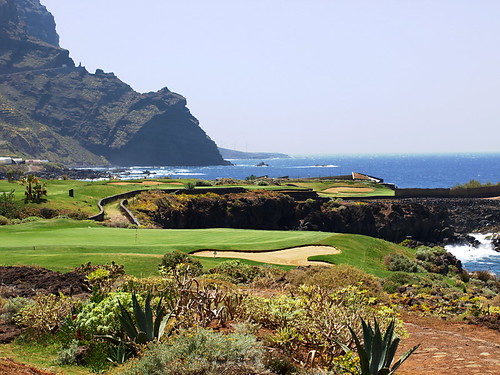 Fancy a Really Quiet Game of Golf?
Buenavista Golf, the Cabildo owned golf course in Buenavista del Norte designed by Seve Ballesteros, has not made a centimo in profit since it opened its greens to golfers in 2003. It’s claimed that the beautiful course has accrued 5.4 million euros in losses. The management of the course has come in for criticism for not changing ineffective business practices that were implemented when the course opened. Using Buenavista Golf is an expensive business and instead of lowering green fees in a bid to attract golfers, it is a more expensive course to play than many in mainland Spain according to golfers.

But Buenavista’s problems aren’t just about high green fees. Some golfers have criticised the attitudes by those managing the course, with some golf pros saying that they didn’t feel it was a particularly friendly course to play. If you don’t get the pros on your side…

It’s stunningly beautiful for sure but it is as about as far from the main southern resorts as you can get and it’s even a trek from the metropolis area. It begs the question who was the bright spark who thought it was a good idea to build a golf course a two hour ‘drive’ away from most of its potential customers?

La Victoria’s Historic Pine Tree
The mayor of the northern municipality of La Victoria wants a pine tree beside the Iglesia de Nuestra Señora de La Encarnación to be declared a Site of Cultural Interest. This is no ordinary pine tree, it’s claimed that this was the pine tree under which a mass to celebrate the victory over the Guanches in La Victoria (hence the name) that ended the conquest of Tenerife in 1495 (or 1496 according to some: It was the end of one year and the beginning of the next so dates get a bit blurry). There’s some debate whether the pine tree is still the same one, but the locals are proud of it and the towering pine is a symbol of a turning point in the Island’s history, so we say give the tree its title.

Tenerife’s Worst Winter for Years?
Possibly, but not for the reasons that some may think. Canarian Farmers are concerned about their potato and cereal crops after what is being described as the driest winter for 50 years across the whole of the Canarian Archipelago. Whilst it’s cereal crops that are suffering in the eastern islands, Tenerife’s potato crop could be a disaster if there’s no decent rainfall between now and the end of February. Carnival on Tenerife is usually the signal for the heavens to open, but not this year… so far.

New Camping Regulations
New camping regulations have been introduced for Tenerife’s camp sites. They’re a bit less stringent than the old rules but whether they are an improvement is down to individual preferences. The new rules include increasing the size of gas bottles that can be used on camp sites (to 13k from 3k), allowing the use of camping furniture (within reason) and allowing caravans and motor-homes to access camping zones. I can’t say I”M pleased about the last; part of the attraction of Tenerife’s camp sites is their wildness. But there’s no doubt it will attract more people. Fines of between 100 and 1500 euros will also be introduced for anyone found to be breaking camp site rules.
However, the rules are academic anyway. Try applying for a camping permit online under the new revised ‘automated’ system and you might risk a descent into madness. If you emerge from the other side with a permit and your sanity intact, you’re a better man than I am Gunga Din.

And finally the TIT (This Is Tenerife) of the week award goes to”¦ Bus Shelters in San Juan de la Rambla
Eight bus shelters in the municipality of San Juan de la Rambla that were erected at a cost of 43,000 euros less than a year and a half ago are now being replaced.
The current council claim that they previous incumbents wasted money by contracting for bus shelters that were poorly built (some are falling apart already), didn’t protect people from the wind and rain (not really a serious problem in Tenerife) and were of such irregular sizes that buses even crashed into them when stopping to pick up passengers (the fact that some are falling apart may be connected to this one).
The political party responsible for commsssioning them (the AIS-CC) claims that the shelters were solid and that it was vandals and the bus driver who crashed into the shelters who were responsible for their poor state after such a short time.
Whoever is to blame, politicians, vandals or a bus driver with a lack of spacial awareness, one thing is for certain, it’s another case of tax payers” money being flushed straight down the toilet.