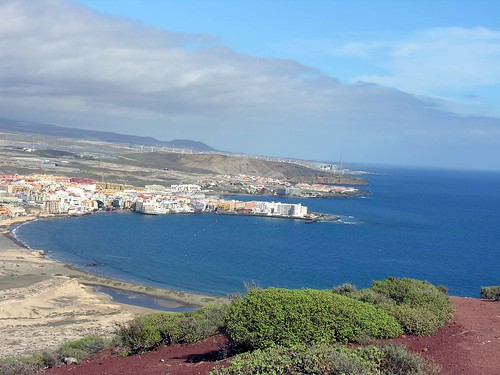 My First, My Last, My Everything, that could be the theme tune for Montaña Roja in El Medano, as the 171 metre high red rock is an image that grabs those arriving and departing from Tenerife South airport.

For me it marked a statement of intent to do more walks in 2010, and standing astride the volcanic peak, looking down on La Tejita and El Medano beaches, I felt I had at least started to burn off the excesses of the festive season. The views from the top show the bizarre contrasts of Tenerife, this protected special nature reserve is home to 100 types of plant and attracts a similar number of bird species, around 70 of them taking a breather as they migrate. Scanning the view, the mountains of Arona and Adeje to the west are spectacular, but much closer to the mountain, planes slice through the sky from the airport. Looking eastward, the bays and coves of Granadilla are equally delightful, but just beyond them wind turbines rise into the skyline.

Strangely this doesn’t ruin the view, just adds a quirky twist to it, looking down at my dust covered feet , I am surrounded by the vibrant red rocks and soil that give the mountain its name, coupled with the warm air and scuttling lizards it’s a reassuring sign that nature still has the upper hand here. 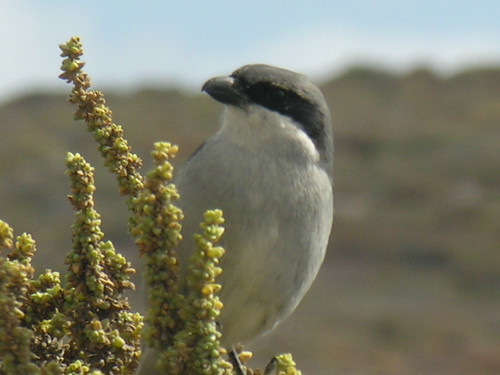 There are two entrances to the reserve from the TF 643, one at the government owned campsite, which has a cheap and cheery café, and the other from the always overfilled car park. Moving through the sand dunes, the bird song alerted me to the small birds flitting from grassy clumps to wild bushes. The Great Grey Shrike posed for a photo but I could have easily seen a Kentish or Ringed Plover. A signpost on the main path gave me the chance to divert to La Tejita beach to view the base of the rock with its wind carved face and small caves. If Great Aunt Martha is with you avert her gaze from the beach, it’s very popular with nudists, and they are looking to make it a Happy Nude Year. 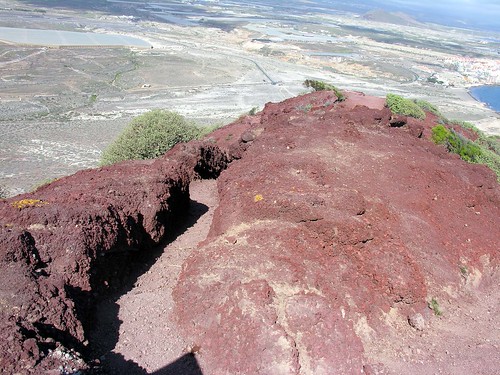 A modern looking white brick building looks a bit of a modern intrusion but is in fact the old cable shed, the starting point for a telegraph line that was laid along the sea bed to Senegal in the late 19th century. Moving up from the west of the beach I soon found the main path upwards past the cracks and small ravines that scar the rock. It was pretty busy but not over steep, rising in gentle gradients. As the full beauty of the view was revealed I felt pretty pleased with my energetic start to the New Year, then a man jogged effortlessly past me, and I saw a family walking with small children and their dog, well that burst my smug bubble. 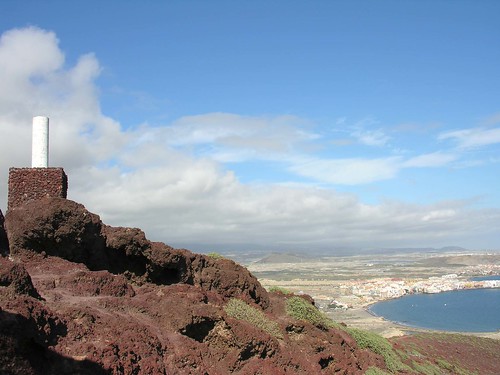 Arriving at the peak, I found a square stack with a white pole, and a precarious rest area, great for photos and grabbing a snack. El Medano shimmered below, and the sun glinted off the sails of the wind surfers, the chatter of the naked bathers below drifted up on the breeze, and the guide board gave helpful tips to pick out viewpoints of interest. The downward return, stripped of some of its fresh wonder, was sliced by nearly half, to around 40 minutes. As the planes crossed overhead from the airport, I wanted to wave at them and urge them to pay closer attention to Montaña Roja, maybe some of them will resolve to do just that.

Mate, not everyone’s cup of tea