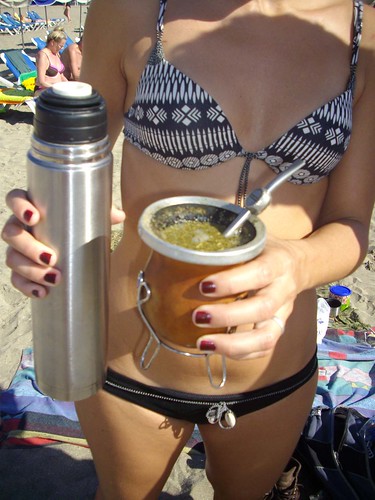 Walking on the Tenerife beach is nearly toasting your feet, the temperature is up in the high 20 degrees, yet people are drinking from Thermos flasks ““ and they are not even British! Has the world finally gone mad?

A closer glance will reveal that the flasks are quite different to those you hugged for warmth on a chilly British bank holiday outing. The metal straw is a bit of a clue and the spinach green mass in the cup certainly isn’t oxtail soup. Mate is a herbal drink made from the dried, chopped, and ground yerba mate leaves from South America.

A Taste Of South America

Tenerife has many links, and visitors from South America, so it’s quite common to see people from Argentina, Brazil, Chile and Bolivia drinking this popular brew with as much dedication as us Brits attach to our endless cups of tea. Natural herbs eh? I know what you are thinking, but in its natural form, mate is no more addictive than tea, and is perfectly legal.

The flasks contain hot water to pour on the mate in the cup, some are pretty basic, but the best are much more ornate, and have their own little stands. The stainless steel or nickel silver straws are especially designed with a series of small holes in the base to sieve the liquid through. The cup is based on, and referred to as a gourd, and the straw is known as a bombilla.

The delightful lady in the photo kindly offered me a sip, it’s quite bitter but not that strong tasting, and surprisingly refreshing, perfect beach juice really. As well as being a very social drink, it contains many vitamins and is said to be good for circulation, mental clarity, and weight loss. Mate is quite widely available in Tenerife, particularly in Santa Cruz and El Campo.

Next time you see someone cupping a bowl and a straw on the beach, don’t descend on them hoping to dip your bread, just leave them to enjoy their cheery brew in the sun.