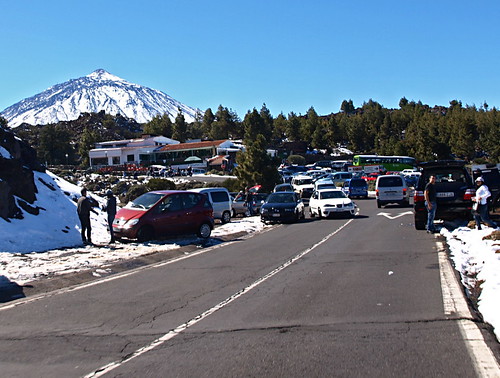 There’s Only One Way to Mount Teide
To say it hasn’t been the best week for weather on Tenerife is a bit of an understatement. With wind, rain, cloud and snow and temperatures dropping to as low as 17C on the coast – during the day – winter finally arrived in one all-inclusive wet and dreary package. Internal flights were cancelled and roads were closed, but there has been one big plus; Mount Teide now has a fresh coat of snow and looks stunning. With Wednesday, 2nd February being a public holiday on Tenerife it’s almost guaranteed that hundreds, if not thousands, of Tinerfeños will flock to Teide National Park for some fun in the snow; causing absolute chaos. To counter the Cabildo are implementing Operativo Nevadas (Operation Snow); a plan to alleviate the congestion by creating one-way systems through the park. As we understand it this means that the only way to get to the mountain from the north is via the La Esperanza road and the only way to leave is via the La Orotava road. Visitors from the south have it a bit easier they can come and go as normal but only as far as the cable car as the road between the cable car and El Portillo will be completely closed. Will it alleviate the chaos? We know where our money lies and we’re not making the journey to find out whether we’re right or wrong.

A New Name for the Tenerife Auditorium
For once Tenerife’s opposing political parties were in unanimous agreement; to change the name of the Tenerife Auditorium to the Auditorium Adán MartÃ­n Menis. Adán MartÃ­n, the ex- president of the Canary Islands who died last October, championed the construction of the visionary structure and the decision to honour his memory by changing the name of Tenerife’s most iconic building is an indication of how much he was liked and respected.

Poor Show at the Tenerife Sales
With the traditional post Navidad sales period continuing on Tenerife for another month, retailers have recorded a 10-15% drop in sales compared to 2010. Despite the usual mad start to the sales, the crowds of bargain hunters soon tailed off leaving shops with lots of unsold stock. Clearly Spain’s economic crisis plays a big part in this, but it might help if some retailers got hold of a dictionary to remind themselves of the definition of “˜rebajas‘. Example: Computer on sale in PC City just before the sales – €299. Once the sales start the same computer on offer at – €350. Go figure that one out.

Tourism is Good for Tenerife’s Environment
It might seem an extreme claim, but consider the findings of Marcelino José del Arco, a professor of Biology at La Laguna University, and it doesn’t seem quite so fanciful.
Over the last forty years as agricultural related occupations on the islands were replaced by tourism related jobs, many farm terraces were abandoned. His research has revealed that nature has grasped the opportunity presented by the abandonment of agricultural lands and the laurisilva forests in woodland areas like the Anaga Mountains on Tenerife and Garajonay in La Gomera are spreading outwards. The same has occurred in nearly all of the Canary Islands and now new areas of these ancient forests are coming to maturity. You could argue that the environment has benefited, in an indirect way, from the growth of tourism. How’s that for irony?

In truth you’ve got to feel a bit sorry for Guia de Isora’s council. On one side there’s the municipality of Santiago del Teide with it’s tourist hot spot trio of Los Gigantes, Puerto Santiago and Playa de la Arena. On the other there’s Adeje whose Costa Adeje resorts cater for everything from upmarket visitors to budget travellers. In between there’s Guia de Isora with its non-touristy coastal resorts, Alcalá and Playa San Juan, that boast just two luxury hotels between them. Guia de Isora clearly feels it’s not receiving its fair share of the spoils and plans to do something about it by swapping the banana plantations for roads, a port, a train and more hotels.
But here’s the thing; at the moment Alcalá and Playa San Juan are the two nicest towns along that coast and attract visitors precisely because of the fact that they are surrounded by banana plantations and have a charming authentic Canarian community feel to them. Swap the bananas for concrete and they become no different from any other purpose built resort. Will it really benefit Tenerife to continue to pave paradise just to put up a parking lot?