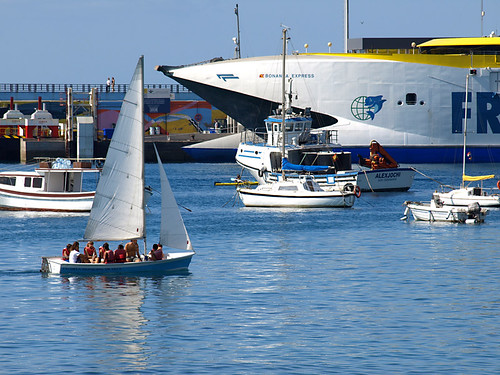 No Cruising in Los Cristianos
The chairman of the Santa Cruz Port Authority has confirmed that cruise ships won’t be docking at the port of Los Cristianos“¦it simply isn’t big enough. There have been suggestions that Los Cristianos would make a suitable “˜stop’ for visiting cruise liners but with the amount of ferry traffic that comes in and out of the port each day, there’s limited space to accommodate the floating cities as well. The question is why on earth would anyone want to swap Santa Cruz for Los Cristianos in the first place? There’s nothing wrong with Los Cristianos, but it can’t compete with the shops, parks, museums, restaurants, galleries, architecture and charm of Tenerife’s capital”¦apart from when it comes to beaches – aha, enough said.

Sunday Opening in Santa Cruz
It’s the end of the world as we know it”¦from a Tinerfeño perspective anyway. La Agrupación de Intereses Económicos Zona Comercial Abierta del Casco Histórico de Santa Cruz (they do like their long titles here) have put forward a proposal that the most historic areas of Santa Cruz are declared a zone of tourist interest and shops that want to participate have licence to open on Sundays. It’s an initiative primarily designed to make the city more attractive to cruise passengers, but it’s expected that it will help attract more visitors from the south of the island as well. As long as everything goes according to plan, Santa Cruz could be open all hours to visitors on Sundays from this summer. But hey, this is Tenerife; how many times do things actually go according to plan?

Policing the Carnaval
There’s been a bit of a hoo-hah about the need to police carnaval in Santa Cruz this year, especially in relation to revellers using the tram. The threats to pull the late night tram service seem to have abated with news that there will be around 320 police officers keeping an eye on high spirits. Not that there’s usually any need; petty crime at last year’s carnaval was 14.5% lower than the previous year. Generally speaking the masses are just out to have fun, fun, fun. But as everybody’s in costume, spotting the real police can be difficult at carnaval. Here’s a tip -if the policewoman is wearing fishnets, mini skirt, has a voice like gravel and three day old growth on her chin, the chances are she isn’t the real McCoy”¦but you can never be too sure.

Son of “˜Son Latinos’
How many people remember the massive Latino beach festival ‘son Latinos’ that took place each summer in Los Cristianos? Well if LM Productions have their way it’ll be back this August, or a variation of it at least. Their idea is to hold an international music festival called “˜Tenerife mar de músicas’ which is aiming at putting Tenerife on the festival map. The festival will include music from artists from Europe and Africa as well as the Latino countries in a 10 hour concert on Las Vistas beach during the last weekend of August. If it gets the green light, August is guaranteed to be extra hot on one of Tenerife’s best beaches this year.

Danny Boy
Who would have thought that the most popular choice of names for newborn boys and girls born in 2009 in the Canary Islands would be Daniel and, spookily, Daniela? But that’s exactly what a study carried out by the Canarian Institute of Statistics discovered. Interestingly, although there were similarities between the islands, there were also some major differences. For the boys, Daniel was first and Diego was runner up in Tenerife; in Gran Canaria it was Daniel then Alejandro; in La Palma Pablo then Gabriel; in Lanzarote Hugo then Alejandro; in Fuerteventura Alejandro was first with Daniel second; in El Hierro Francisco was first but we don’t know who was second (maybe there was only one boy born there) and in La Gomera Aaron was first with Borja second.

I’m not sure what that says about the islands, but if you’re looking for a name for a baby, there are some rather nice ones in there.

And finally the TIT (This Is Tenerife) of the week award goes to whoever was responsible for trying to convince us one-way traffic into Teide National Park on fiesta day was a good idea.

Last week we mentioned plans to introduce a one-way system to deal with the amount of traffic expected to head for the snow in Teide National Park on fiesta day. As expected it was total chaos with 25000 cars heading for the park and queues reportedly stretching from El Portillo all the way back to La Laguna. It was so bad that some families gave up and had a picnic in the forests on the approach road instead. By closing access from La Orotava it meant that everyone from the more populated north was forced to converge on the one road. It was never going to work.
But what was worse -and we don’t know if this came from the Dept of Mobility or somewhere else – were the reports that officials had implemented a “˜one- way’ system in the afternoon to sort out the queues. It was a wonderful piece of spin ““ the one-way system that had contributed to the mess was being held up as also being the solution. Did someone forget there had been press releases about Operativo Nevadas beforehand?

Officials are now debating how to deal with the problem in future. One solution put forward was to close the roads and bus people in. Let’s say there were two people per car (that’s being very conservative); that would make 50,000 visitors based on last Wednesday. The standard bus can seat approx 60 passengers. So that would take 833 trips (one way) to get everyone to the park. Not only that, where would people park their cars to catch these buses? Wouldn’t it just be”¦err chaos?

Heads They Win, CD Tenerife Thrill Their Fans In Salamanca