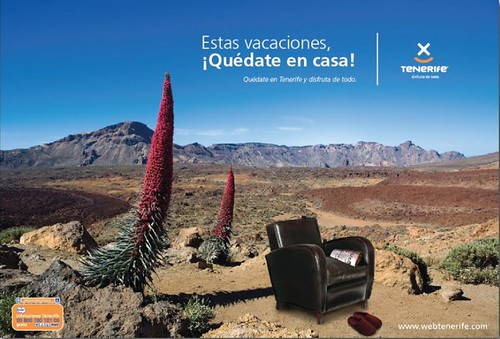 This week’s election results on Tenerife have taken up much of the news over the past few days, but the inexplicable nature of some voting patterns is just too extraordinary to be even begin to try to summarise. We’re still scratching our heads as to why some residents continue to vote for politicians whose motives are quite clearly dubious…but that’s democracy for you. Or is it? There have been quite a few reports of dastardly deeds over the last week as some politicians turned to all sorts of schemes (allegedly) in a bid to attract more votes than the other guy (or gal). But we’ll steer clear of that political mire and have a look instead at some of the other snippets of news that came out of Tenerife this week.

Stay at Home this Summer
But only if home happens to be in the Canary Islands. Next month the Tenerife Cabildo (government) will launch a campaign entitled “quédate en casa’ to encourage residents of the Canary Islands to spend their summer holidays on the islands (preferably Tenerife). The campaign includes posters which show images of famous natural landmarks to which homely items like sofas and lamps have been added (presumably to send the message that staying on Tenerife is as comfortable as being at home). The Cabildo are trying to exceed the 570,000 Canarian based visitors who had fun in the sun on Tenerife last year. With an economic crisis still affecting Spain, the chances are that many islanders might be looking for holiday destinations closer to home, so the Cabildo may just achieve their goal.

The Tram Hits a Milestone
Congratulations to one of Tenerife’s success stories, the Tranvia (tram) which has transported over 50 million passengers between Santa Cruz and La Laguna since it began operating in 2007.

Money for Nothing in Arico
Not quite worthy of the TIT (This is Tenerife) award but close, the fishermen of Tajoa in Arico have had to cough up an annual payment of €800 as insurance for a crane on the village’s picturesque dock. The problem is that the crane, initially designed for a harbour in Gran Canaria, isn’t suited to Tajao and hasn’t been operational since it was installed two months ago since when it’s been sitting uselessly on the dock like a….fish out of water.

The Money-Making Santa Cruz Tourist Bus
Statistics for the new Santa Cruz tourist bus suggest that it might be a winner despite a decidedly shaky start. Over 14000 visitors caught the tourist bus in its first 6 weeks in service; a figure that equated to an average of over €3500 in tickets sold daily. As expected most of the bus passengers (75%) were cruise visitors. The statistics didn’t reveal any information regarding customer satisfaction, but we can only assume that the service has improved a lot since its hilarious first outings.

And finally the TIT (This Is Tenerife) of the week award goes to…Puerto de la Cruz
This week the council in Puerto de la Cruz declared that the town would no longer tolerate the exhibiting of animals for commercial purposes. In future, circuses featuring animals won’t be allowed to set up their big tents in the town. It seems a commendable decision and would appear that the council is actually starting to take heed of what is happening in more advanced parts of Europe – apart from one vitally important factor. Puerto de la Cruz is also home to Loro Parque; one of Tenerife’s biggest tourist draws with its popular dolphin, sea-lion, parrot and orca shows. It”ll be interesting to see how the council gets round that one, if the irony of their decision has even occurred to them yet. Of course they may be fully aware of the implications of their announcement and have plans to close Loro Parque…Oh yeah?