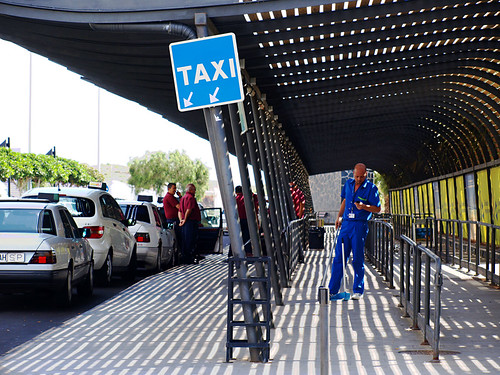 Don’t step on the gas
In a move that seems to have taken just about everyone by surprise, the Tenerife Government have announced a levy on motor fuel on the island of up to 0.02 cents per litre. The tax increase which doesn’t affect other Canary Islands, is effective immediately. Unsubstantiated reports say that the tax has been put in place to help pay towards the maintenance of the island’s roads, presumably to try to counter the cuts in budget from the state. Apparently there’s no truth in rumours that Hollywood film-makers currently shooting scenes on the island have decided, after filling up their army of vehicles at local petrol stations, to change the name of their movie to the Ripped-off and the Furious.

Not exactly a case of love thy neighbour
Expecting councils to work together to benefit Tenerife is a bit of a pipe dream when you consider a decision taken by Granadilla de Abona Council this week. The council voted to lobby the Tenerife Government to prevent taxi drivers from neighbouring municipality San Miguel de Abona being able to work at Tenerife Sur Airport even though San Miguel taxis have been working the airport for the last 27 years. A spokesperson for Granadilla quoted technicalities in the Canary Islands Transport Act to defend the decision. But they can interpret legislation how they like until the cows come home, it’s simply just not neighbourly and comes across more like another example of the airport taxi mafia trying to have things all their own greedy way.

It’s quackers
Looks like it’s the end of the road for the duck pond outside of La Laguna’s permanently under repair cathedral. The local council have decided that the ducks pose a health threat and so the little pond will be replaced by a children’s playground. Although a children’s playground doesn’t quite have the same attraction as a quaint little duck pond, in truth it’s a good deal for the waddlers who will be relocated from their small enclosure to the green wide open spaces and much bigger pools at Parque de la Vega.

Well done Adeje
Adeje is the latest Tenerife council to make it possible for residents to be able to apply for certificados de viajes (the document required for residents to be able to travel at discounted prices) online and at no charge. More and more Tenerife councils are trying to make life a bit easier for their constituents by utilising the internet in this way, whereas some other councils are still asking “What’s the internet?’ However, this being Tenerife, making official documents available online doesn’t always make life easier for the consumer. See our TIT of the week below.

And finally the TIT (This is Tenerife) of the week award goes to… a total lack of co-ordination.
It’s hard to say who’s at fault with this week’s TIT of the week as it seems to involve heavy lashings of a few Tenerife quirks. A group of travellers from La Laguna found that their certificado de viajes downloaded from La Laguna Council’s website was dismissed as not being valid by check-in staff working for Air Europa. To be able to board their flight to Madrid, the Laguneros had to cough up the full amount of the air fair.

La Laguna Council insists that the document is legal and in their defence, plenty of other Laguneros have travelled using it without experiencing any problems on Iberian and Binter so it appears that Air Europa may be the ones who have got it wrong.

However, that’s of no real consolation to the people who lost money because of the mix up. Shouldn’t what is and what isn’t considered valid have been agreed between the Tenerife Government, local authorities and airline companies in advance? Maybe we’re asking too much to expect that sort of level of planning, organisation and communication.