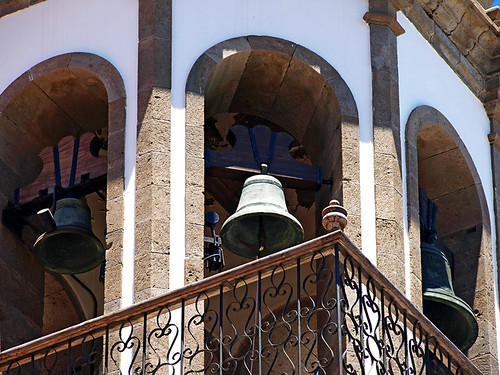 The Bells, the Bells, they Deafen Me
Some townsfolk in Granadilla de Abona are up in arms about the decision of the local priest to stop a centuries-old tradition of ringing the bells of the Iglesia de San Antonio de Padua every fifteen minutes throughout the night. You’d think they’d be delighted by that decision. But no, they’re incensed by it. In fact you could go as far as saying the peasants are revolting. They say that the bells ringing out throughout the night are emblematic of the town’s past.
However, look a little deeper and there might be shades of Royston Vasey going on here.

Exhibit A: Complaints against the priest seem to focus on the fact that “˜he’s only been there a year’ ““ not local, an outsider then?

Exhibit B: Another complaint is that the bells have been stopped to appease tourists staying at the rural hotel opposite the church ““ more outsiders causing problems.

The rural hotel only has a small number of rooms, so it seems highly unlikely that it would have the influence to stop the nocturnal bell ringing. Furthermore, the priest insists that there are plenty of other townspeople who wanted a cease to the bells between midnight and 8am.
In many ways it’s a quirky, rural town feud but in another it’s a microcosmic example of a trait that can sometimes raise its head on not only Tenerife, but other small islands.

Puerto de la Cruz ““ Open to Traffic at Last
There seems to be a belief amongst road planners in some places on Tenerife that a town doesn’t look its best unless half its roads are dug up. In Puerto de la Cruz, not only has one of the main routes into town, Carretera Botánico, been dug up for a year, so has the main access to Plaza Charco along Calle Zamora. The good news is that both roads are now finished”¦almost. Despite the Cabildo announcing that Carretera Botánico’s revamp was completed within the project’s time limits, manhole covers jutted out a good few inches above the road surface (now rectified) and the pedestrian crossings haven’t all been replaced, causing dangerous confusion amongst drivers and pedestrians. Calle Zamora, although looking a sight for sore eyes, now only requires a bureaucrat to rubber stamp it before it can reopen to traffic (that can take up to 15 days). Unfortunately, that’s not much consolation for the businesses that closed down along it during its lengthy closure. Councillors in Puerto are scratching their heads because tourist figures are dropping. Maybe now visitors can actually get into town those figures might start to increase.

Sightseeing in Santa Cruz
Cruise passengers visiting Tenerife’s capital, Santa Cruz, will be able to access a great new service at the end of February or early March. Five state of the art tourist buses will be at the port to meet them and take them on an historical and cultural tour of the city’s highlights. It’s planned that there will be 14 stops along the way for passengers to be able to pick and choose what sights they want to explore in a bit more depth before catching the next “˜tourist’ bus that comes along. Information on the buses will be provided in various languages. Sounds like a good initiative to encourage visitors to spend a bit more time in a wonderful city.

Arona ““ an Excellent Place for Bathing
On a hot, sunny day the shimmering waters lapping Playa de las Américas, Los Cristianos, Las Galletas and Palm Mar‘s beaches look deliciously inviting, but not only do they look good, tests by the island’s Medio Ambiente (environmental dept) have confirmed that the quality of the water on Arona’s coastline is excellent as well. It’s reassuring to know that you’re not going to encounter any”¦err…unexpected obstacles during your swim.

The Big Cheese
Congratulations to La QueserÃ­a Artesanal Montesdeoca, a small, family run cheese making business in Adeje. They picked up the bronze medal in the semi-cured smoked goats’ cheese category at the World Cheese Awards 2010 held in Birmingham at the end of November. The family of cheese makers, originally from La Palma, were the only winners from the Santa Cruz de Tenerife province at the prestigious event. We’ll definitely be seeking them out to try some of their award winning cheese. Some local press reports omitted to mention that the “˜other’ Canarian province won a number of gold, silver and bronze awards but shhh, we don’t mention that here. Incidentally the best in the world award went to the Cornish Cheese Company’s Cornish Blue.

And finally the TIT (This Is Tenerife) of the week award goes to a cable wiring company in Isla Baja
This week we’ve got a TIT that demonstrates Tenerife’s quirky and inconsistent nature perfectly. At the end of November, thieves stole 600 metres of cabling connecting streetlights on the TF-42 in Los Silos.
600 metres of wire gone in one night from a main road and nobody saw a thing? Well I suppose you could say that was because the road was plunged into darkness. But here’s the TIT bit. It took the company that was contracted to replace the stolen cable three weeks to do so.
Thieves took the lot down in one night in the darkness and the so called professionals needed three weeks to get the replacement cables back up and lights working again.
They should make it a priority to catch these cable thieves”¦ and offer them jobs.