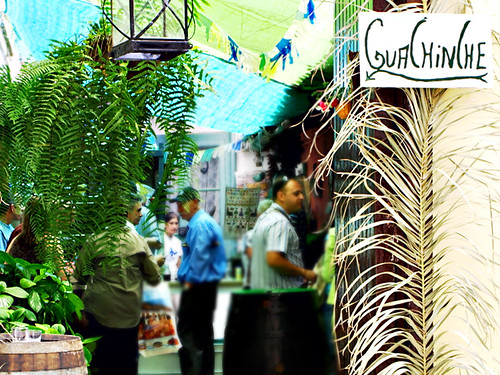 Stricter Rules for Guachinches
Anyone who has travelled through Tenerife’s northern parts will be familiar with the scrawled signs on trees and fences pointing the way to ‘guachinches” ““ makeshift restaurants that serve a limited selection of food and wine. Guachinches are great places to taste a slice of local culture and they possess an attractive anarchic quality; a bit like the culinary version of an illegal still. But that anarchic quality could change this year. In theory guachinches should serve a maximum of three dishes as well as wine from their own vineyard. Additionally they should just open for three months. However, it’s estimated that only 5% of guachinches on Tenerife comply. Restaurant and vineyard owners have been kicking up a fuss about losing business to these cheap and cheerful establishments, so northern municipalities have agreed to take action to enforce regulations from November. As there are hundreds, if not thousands, of guachinches dotted around Tenerife’s northern slopes, many hidden away in all sorts of odd locations, the legislation is almost impossible to implement. So guachinche fans should be able to continue to enjoy the hospitality of these unique Tenerife institutions for the foreseeable future.

Gregor, Europe’s biggest telescope
Europe’s largest solar telescope, called Gregor, was unveiled at the Teide Observatory this week. The new telescope, built by a mainly German consortium, will study solar activity and be able to track and take precise measurements of sunspots, flares and other spectacular phenomena such as coronal mass ejections which are huge bursts of solar wind that can reach a velocity of 3200 kilometres a second.

Get Married on the Cheap in the Canary Islands
Getting married in the Canary Islands won’t dent your bank balance as much as getting married anywhere else in Spain will according to a study by FUCI (Federation of Independent Users & Consumers). The average cost of a wedding in the Canary Islands is apparently around €10,500. The bride accounts for about €1500 of the cost whilst the groom comes in at a more bank balance friendly €310 – €750. The honeymoon only accounts for about €1200 per couple which seems remarkably low (in the UK it’s £3000) – maybe a lot of Canarios have their honeymoon on another Canary Island. The most expensive place in Spain to get married is, unsurprisingly, Madrid where it costs love’s young dreamers €600 more to tie the knot.

Callao Salvaje has a beach
Playa Ajabo, the new beach at Callao Salvaje, was officially opened this week, three years and 1.8 million euros after the green light to create a decent beach in the south western resort was approved.

And finally the TIT (This Is Tenerife) of the week award goes to”¦ The Rock Coast Festival
It would be easy to pick on LM Producciones for the Rock Coast Festival fiasco but would it be completely fair? There were possibly mistakes by the organisers, like putting tickets on sale before many of the ‘big’ international names were announced. But the cancellation last week of the biggest music festival to hit Tenerife for years highlights a more worrying problem. Despite a line-up that included Marilyn Manson, Ben Harper, Iggy Popp, The Smashing Pumpkins & Fatboy Slim, only a measly 6,000 tickets were sold. The poor ticket sales weren’t due to a lack of advertising; the Rock Coast Festival was promoted extensively on Spanish TV and even picked up by the top British newspapers.
So was the economic crisis the problem? That undoubtedly played a part. Was it because the venue was in Santa Cruz? Spanish and Latino artists regularly sell out their concerts on Tenerife. But therein also lies a possible clue to low ticket sales. On Tenerife, Spanish & Latino artists might enjoy sell-out concerts but it isn’t always the case with international names. Bruce Springsteen performed in front of an audience of around 26,000 in Gran Canaria recently, but there were still a whopping 14,000 tickets unsold. If the Canario population isn’t going to fill venues for non-Spanish speaking artists then Tenerife’s future as a serious destination for international singers and groups is bleak.
Still, we can console ourselves with the fact there will always be Maná, Bisbal and Juanes to look forward to…