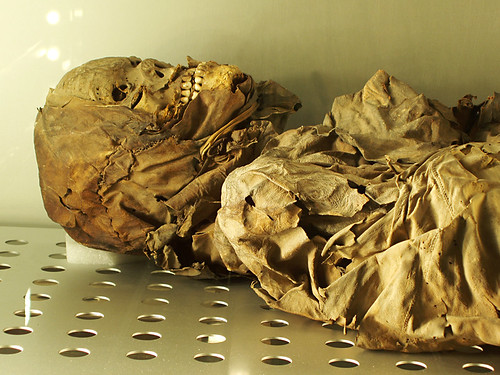 The North African Connection
Tenerife’s original inhabitants, the Guanche made the headlines a couple of times this week. Claims that the island’s aborigines hailed originally from North Africa were given more credence by a new exhibition of pottery at the Museum of Man and Nature in Santa Cruz. The pottery, donated by Liverpool Museum of Fine Arts, includes examples of utilitarian pottery made by the Berbers and Ancient Egyptians. Some of the designs on both match almost exactly designs found on Guanche ceramics, which historians say is further evidence of a link between the islanders and North Africa. The other Guanche related news relates to the return to Santa Cruz of three Guanche mummies that have been “˜residing’ in Madrid since the 19th century. The mummified remains of the two women and a man are also now on display with other fascinating, and a wee bit gruesome, examples at the Museum of Man and Nature.

A Smart Hotel
There have been reports from Gran Canaria that scientists and the Las Palmas de Gran Canaria Tourist Board are working together to develop a smart hotel. Anyone who’s seen the movie Minority Report will be familiar with the concept of advertising being directed to individuals based on face recognition. The smart hotels will work in a similar way. When a guest walks into a room they’ll be instantly recognised and a database will know their likes and dislikes so that service can be tailored to individual preferences. Presumably when you walk into the hotel bar a soothing robotic voice will announce something like “˜good evening Mr Bond, we’re mixing your vodka martini now and it will be waiting your arrival at the bar’. Another example of what the smart hotel can do is that bedrooms will be able to change their décor to suit. So if you like a golden beach, that’s what you get on the walls.
Apparently there’s no truth in the rumour that the Tenerife authorities, having learned what their rival neighbours are planning, came up with the opposing idea to create a dumb hotel where no-one remembers your name, they get your order wrong at the bar, bring you food you didn’t want and then overcharge”¦but then scrapped plans when they realised that model was already in place.

The Cost of Speeding on Tenerife
The new “˜temporary’ laws regarding the speed limit on Spain and Tenerife’s motorways came into effect from Monday 7th March. But what exactly are the penalties if drivers forget the limit is now 110kph?
Drive between 111kph and 140kph and it’s a €100 fine ““ but without a points penalty.
Push the pedal to the metal and hit between 141kph and 160kph and the fine goes up to €300. If you’re caught driving between 151kph and 160kph you’ll also lose two points from your licence”¦and it serves you right because you’re driving far too fast even for the old limits.

At the moment the Spanish Government are saying that the restrictions will remain in place until the 30th June when it will be reviewed (i.e. someone will count up the money made in fines and decide whether it’s a nice little earner or not).

A Disappointing End to the Winter Sales
It doesn’t need a rocket scientist to analyse why the two month long rebajas period from January to March returned sales that were between 10 and 15% lower than last year. The ongoing economic crisis was one reason, but the fact that many retailers didn’t actually reduce their products by a decent amount meant that bargains were few and far between. When shoppers realised this after the initial surge, sales at the sales dropped off. Now retail groups are debating whether the two month long sales period is too long. Maybe it is, but here’s another radical suggestion. If retailers want to improve returns during the sales period why not try bringing prices down by more than a nominal amount? TM witnessed at least one branded retailer who actually put some prices up.

And finally the TIT (This Is Tenerife) of the week award goes to… the seemingly politicising of what should have been a nice touch in Puerto de la Cruz.

The CIT in Puerto de la Cruz’ idea to honour loyal visitors to the town by holding a ceremony in the town hall was a nice idea. Recognising publicly the value of visitors who come back to the town year after year is commendable.

42 loyal visitors, mainly from Britain and Germany but also from other countries, were honoured at the event which was attended by representatives from the town’s most popular hotels. Some of those being honoured had visited Puerto de la Cruz up to 50 times. Interestingly, despite mainland Spanish boosting the number of people staying in Puerto during the summer months there was only one Spanish couple present. It was this couple that newspapers quoted when reporting what brought fans back to the town.

The weather and being able to enjoy snow on Teide in the morning and a few hours sun on the beach sounds good as does the friendliness and the warmth of the people. However, when it was reported that amongst the treasures that brought them 15 times were the level of services ranging from trade to travel, the restoration of the urban and natural environment, the reform of the road network and the modernisation of various streets it suddenly started to sound like something a politician would say. I wonder if they’d asked Betty and Bert from Bolton why they came back year after year whether their list would have matched that of the couple from Pamplona.

The final nail in the credibility coffin came when it was reported that their list of reasons also included the first phase of the development of the future Parque MarÃ­timo. Oh, come on. The first rule of comedy is”¦you have to have reality (Ted Bovis, Hi-De-Hi).