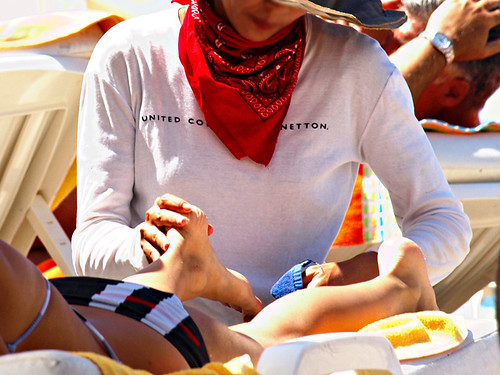 The Fast and the Furious 6 to be Filmed on Tenerife
The internet is full of news (Spanish language sites at least) that some of the movie, Fast and Furious 6 will be shot in Tenerife ““ specifically around Santa Cruz and Puerto de la Cruz (there’s no way they’re not going to take advantage of Tenerife’s mountain roads and the scenery in Teide National Park). The sixth in the long running series starring Vin Diesel (good name for the star of a film about cars), Paul Walker and more latterly, Dwayne ‘the Rock’ Johnson will involve a more ambitious storyline than normal that is rumoured to spread into Fast and Furious 7 and will also see the return of sparky Michelle Rodriguez. Production on the film starts this month and, if reports are true, the cast should be screeching around Tenerife’s roads for about five weeks between July and August.

No More Beach Massages in Adeje
To some the fruit merchants, sarong selling dancers and masseurs on Costa Adeje’s beaches add a splash of colour, to others they’re just a nuisance. For anyone in the latter group, the news that Adeje Council are to take action against illegal beach masseurs will be welcomed.
The council believes that the presence of beach masseurs on Adeje’s playas don’t paint a good image of the resort to tourists. Presumably people lying on a beach sighing pleasurably as their bodies are massaged isn’t the sort of image you want to portray in a beach resort… hold on a minute.
The council also wants to spread the message that massages by unqualified masseurs can be dangerous to the health. Unfortunately, we couldn’t put our hands on actual statistics relating to how many holidaymakers picked up beach massage injuries during visits to Tenerife.

Stung by Sting
And so another high profile concert bites the dust. Following the cancellation of the Rock Coast Festival, Sting is the latest ‘big name’ to play Tenerife that won’t actually play Tenerife. The organisers say that the concert had to be suspended after demands by Sting’s representatives had bumped up the originally agreed figures by 600%.
Organisers played down the low ticket sales (6000 sold out of a possible 13000) saying they expected a late surge and that they believed most tickets would have been sold by the date of the concert.
If unreasonable demands by Sting’s entourage is the reason for the show’s cancellation then maybe it’s about time that the star picked up a newspaper to learn about the economic crisis affecting the real world.
Thankfully the music scene on Tenerife doesn’t solely rely on superstars ““ there are still plenty of mini festivals and live music concerts on Tenerife over the coming months to keep music fans” appetites sated. Keep an eye on our facebook page for details of the best.

And finally the TIT (This Is Tenerife) of the week award goes to”¦ Endemic Corruption
A few years ago, the findings of a financial audit in Icod de los Vinos came to the conclusion that a sum of “Missing’ money, amounting to over a million euros, could only be explained by fraud or incompetence ““ neither of which reflected well on those involved.
This week the Provisional Prosecutor for Santa Cruz suggested two year’s imprisonment and a ban from holding public office for 20 years for the mayor of the northern town because of the irregular award of lucrative building contracts without legal processes being followed. The amount that was ‘handed out” amounted to over three million euros between 2003 and 2007.
Last week the Spanish press reported that another mayor from the Canary Islands had been handed a prison sentence for similar reasons.
There are currently over 300 individual cases of suspected corruption by people in public office being investigated in Spain currently; a number of these are in the Canary Islands.
Thanks in no little part to the internet, the ability to share information quickly and more easily means we live in increasingly transparent times. The politicians who have taken advantage of ignorance in the past and who don’t realise this fact are finding that their days are numbered.

The crazy thing in Tenerife and other Canary Islands is that being found guilty of fraud whilst in public office doesn’t necessarily mean that the people won’t vote for you again next time around. So maybe it’s those voters who deserve the TIT of the week award.