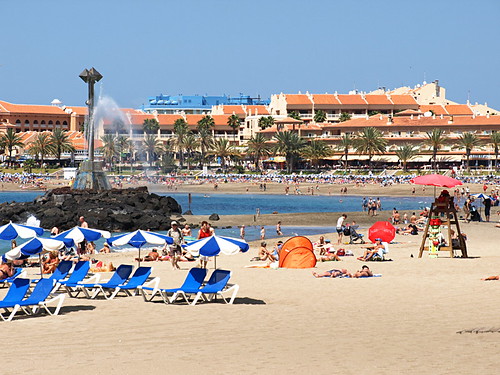 Tourism is Good for Business
In a time when unemployment is rising and the never ending crisis continues to bite even deeper, it’s interesting to note that the oft maligned tourist resorts of Tenerife’s southern parts are actually helping to stem the tide… a little.

Whilst around 7,000 jobs were lost on Tenerife last year, it could have been much worse had it not been for the municipalities of Arona and Adeje. With the amount of visitors to both increasing by 8.4% last year, there were actually more jobs available in both municipalities than in the previous year.

In Puerto de la Cruz and the north, despite an increase of 3.1% in visitors, the number of jobs fell: possibly connected to a massive decline of 15.4% in the construction sector.

Although another increase in tourist figures is expected in 2013, it’s unlikely that it will have a great impact of the loss of jobs across the island so whilst there will still be plenty of people enjoying fun in the sun, there will be far too many others experiencing stormy weather.

Sting Sings
For those who may have missed the news, the peroxide-haired one will definitely be bringing his Back to Bass tour to Tenerife on Saturday 30th June at CD Tenerife’s Heliodoro Stadium in Santa Cruz. Tickets are €50 a go and are on sale at Halcón Viajes and Carrefour outlets as well as via ticketmaster.es. Anyone who wants to see Sting live should book their tickets pronto. There are only 14,000 available and 5,000 of them were sold within the first 10 hours of going on sale.
Reviews of Sting’s performances on the tour have been generally very good. But some have criticised a lack of The Police hits in the show sort of missing the fact that it’s Sting and not The Police that are performing. Anyone expecting to sing-along to Roxanne, Message in a Bottle and Every Breath You Take might be better sticking to The Patch in Playa de las Américas.

The Tenerife North Train Delayed
The plans to introduce a train linking Santa Cruz, La Laguna, Tacoronte, La Matanza, Santa Ursula, La Orotava and Los Realejos seems to have come off the rails again with both north and south train projects stalling for the time being.
The north connection would have meant passengers could have travelled between Los Realejos and Santa Cruz in around 34 minutes as opposed to the… err under 30 minutes it can take by car now.

Don’t Keep on Trucking
Tenerife’s police forces are on a roll at the moment. After Guardia Civil agents broke up the Cocoon gang last week, this week National Police agents ‘felt the collar’ of a con artist in Santa Cruz. The scam artist had made around €400,000 selling non-existent trucks on the internet. Police arrested him in Santa Cruz in the process of concluding another fantasy sale worth €50,000. Whilst in no way condoning his actions, it shows impressive enterprise on his part in being able to use the internet on an island where many still have a phobia towards it to make such a decent amount of money. Tellingly his victims tended to be from outside of Tenerife.

Tarragon Shortage
There were reports in the UK press and on the BBC last week about a shortage of tarragon in Britain. One importer put the shortage down to adverse weather in Israel, where much is grown outside of the British growing season. It came as a bit of a surprise to see that they also attributed the shortage to unusually bad weather in Tenerife and Spain; the other destinations that they imported from. The statement shows how ‘bad weather’ can mean different things to different people. Tarragon likes a lot of light and moderate temperatures but it also needs water and that’s the ingredient that’s been lacking on Tenerife. Tenerife’s unusually bad weather in this case refers to the drought which shows no sign of ending. Looks like chicken in a tarragon and mustard sauce is off the menu for the time being.

Summer of Love filmed at Las Teresitas
This week German Euro-dance trio Cascada released the video for the first single from their upcoming new album. The song called Summer of Love was filmed at the exotic Playa de las Teresitas near Santa Cruz. Normally we’d include the video but in this case we didn’t think that it was fair to inflict such an ordeal on our readers. Playa de las Teresitas looks nice but the song sounds like every other uninspired Euro summer dance anthem from the last 15 years – Hearditallamilliontimesbefore.com

And finally the TIT (This Is Tenerife) of the week award goes to”¦ the Scrooges in the Canary Islands Government.
We’re all familiar with the term ‘austerity measures” and understand the need to implement strategies to try to ride out the current economic crisis but some measures seem to amount to misguided, petty, penny pinching.
Employees at some of Tenerife’s and The Canary Islands” medical institutes will lose their right to free parking in a bid by a government department to save money. Anyone who has tried to park at the Hospital Universitario de Canarias (HUC) in La Laguna will know it’s a nightmare and workers were allocated free parking spaces to help them be able to park near to their workplace.
The plan to remove these free places affects the HUC, Hospital Universitario Nuestra Señora de Candelaria (HUNSC) and Hospital Doctor NegrÃ­n in Gran Canaria.
There is a need for Spain and its provinces to implement strategies to address the country’s financial problems… but implementing silly ones as opposed to sensible, well thought out ones is partly the reason the country is in a financial mess in the first place.

My Tenerife, A Personal View From Gavin Lewis