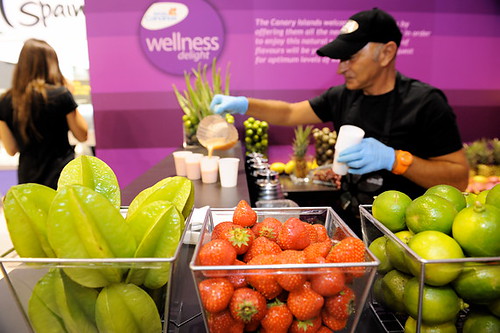 Tenerife and the Canary islands at the World Travel Market
The World Travel Market in London came to a close last week. The high profile event is the perfect showcase for promoting travel destinations to the cream of the world’s tourist industry and representatives from Tenerife and The Canary Islands were there to spread the word. So for our header photo this week we’ve gone for a shot of The Canary Islands” colourful stand at the WTM. Tropical and fruity don’t you think?

El Hierro Eruption Update
Despite the island experiencing the most powerful earthquake to date last week, registering 4.6 on the Richter, it appears that there might be a return to normality in El Hierro. Residents of La Restinga have been allowed to return to their homes because scientists believe that the volcanic situation has stabilised. Whilst magma is still being released into the sea and there’s the possibility of another opening occurring to the north of El Hierro, scientists don’t believe another eruption is imminent.

Seismic activity has decreased and although there are still tremors, they are taking place at least 20km below ground.

It’s sounds like good news at last for El Hierro. Let’s hope the scientists are right.

Tenerife’s Worst Natural Disaster
José Luis Hernández, a member of the Canarian Meteorological Association presented a documentary in La Orotava last week about a terrifying occurrence that few people on Tenerife know much about which took place less than 200 years ago.

A tropical storm that battered Tenerife for 11 hours between the 7th and 8th November 1826 resulted in the loss of between 500 and 1000 lives and the destruction of over 400 houses.

The worst hit was the La Orotava Valley where the rain fell so heavily that new ravines were created. Such was the amount of debris caused by landslides, the sea was pushed back more than 200 metres and the mouths of ravines were widened by up to a kilometre. The storm also took the original carving of the Virgen del Candelaria and destroyed a gigantic ancient drago tree in the centre of La Orotava.

Incredibly, despite occurring relatively recently in historic terms, lack of documentation from that time was such that no-one knows what actually happened. It’s only an educated guess that the devastation was as a result of a tropical cyclone similar to Delta in 2005; the difference being that the 1826 storm disastrously coincided with a severe rain front.

We sometimes believe that extremes of weather are a new phenomena caused by climactic change, Tenerife’s history shows us that this isn’t necessarily the case.

The Protest Against the Port of Granadilla
What’s for certain is that there was a protest against the construction of the controversial port at Granadilla; what isn’t certain is how many people actually turned up in Santa Cruz on Saturday 12th November.

The National Police said 3,000; the organisers claimed 5,000 and yet another account reported 10,000 protesters. It would break the mould if for once both police and organisers quoted similar figures.

Callao Salvaje’s Beach
Playa de Ajabo, the eagerly awaited new man-made beach at Callao Salvaje will be finally ready for sunbathers to lay their towels on by March 2012…just in time for the spring tides to wash it away.

Facetiousness aside, improvements to the pier area will help protect the coast and hopefully prevent this sort of thing from happening.

The End of the Botellón
It increasingly looks like the days of impromptu street parties, botellóns, on Tenerife are numbered. La Laguna council are making changes to the law regarding drinking in the streets that will see fines increased from €90 to between €120 and €302.

What’s interesting is that instead of paying a fine, offenders can opt for community service of up to 18 days for the maximum offence. For the youngest offenders (14 to 17 years of age) this community service is called the Programa de Intervención Socioeducativa and can take the form of activities like street cleaning.

If you thought street cleaners on Tenerife looked as though they were getting younger, now you know why.

Didn’t know Arona had a wine museum? That’s no surprise. Despite millions of euros being invested into the development of a Casa del Vino, the local council has decided to close it…before it’s even opened.

Residents of the town of Arona, the administrative centre for the tourist resorts of Playa de las Américas and Los Cristianos, are confused and outraged at what appears to be a total mishandling of what could have been an excellent rural attraction for the south of Tenerife.

In theory, restoration of the privately owned, historic building has been going on for the last ten months. But residents claim that not only is there no furniture in the building, rubble from the house has been dumped in a barranco near the town and important historic artefacts such as parts of an old wine press have been destroyed. After 10 months and a lot of money, the Casa del Vino is still in such a state that the council have shelved the project.

Residents and opposing political parties have demanded an explanation from the council about the fiasco of the wine museum that never was and want to know what has happened to the money (reports suggest anything up to 12 million euros) that was supposed to be invested in the restoration. So far they’re still waiting for a satisfactory answer.

Clubs Where Non-Members Can Play Tennis on Tenerife