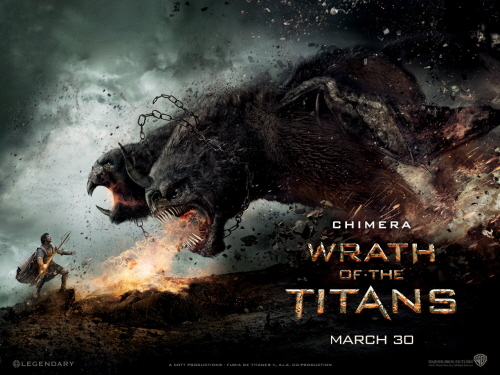 Wrath of the Critics
This week Wrath of the Titans, partly filmed on Tenerife, was unleashed on cinema audiences. Anyone who endured the awful Clash of the Titans wouldn’t have held high hopes for a sequel made by a director whose track record isn’t great. But could it really be as bad as the original? Surely lessons had been learned? Apparently not.

“…Unimpressive special effects…” sniffed The Guardian. “I felt as if I was sitting on top of a pneumatic drill, while a bellowing Worthington hurled handfuls of earth in my face…” was The Telegraph’s view whilst Rolling Stone Magazine labelled it “…toxix spray digital Styrofoam disguised as movie…”
Scotland’s Daily Record summarised more simply – “The acting is dreadful and the story a total yawn…”

Bad though it was, Clash of the Titans made a lot of money at the box office. No doubt Wrath of the Titans will do the same. Wrath of the Titans is being screened in Tenerife’s cinemas in Spanish only at the moment. Given the critics” verdict on the clunky dialogue, this might be one occasion when dubbing actually makes it more bearable.

Austerity Measures Mean it’s Adios to Buenavista Golf and Tenerife Rural
As part of the austerity measures designed to help reduce debt, Tenerife’s Government has agreed a radical restructuring and streamlining of some of the businesses they currently own or invest in.

Ten companies will be liquidated, eight others will be merged and another nine will be sold.

The ten that will be closed include Tenerife Rural and Eólicas de Tenerife and Sofitesa whilst amongst the mergers TEA and the Tenerife Auditorium Adán MartÃ­n will find themselves joined with Ideco (sport, culture and leisure). Those up for sale include Buenavista Golf, Granja Teisol (Teisol Farm) and Parque Eólico de Punta de Teno.

The restructuring will reduce the number of businesses the Tenerife Government are currently involved with or invest in by 45% .

The sale of Buenavista Golf may actually result in the stunning but often criticised course being run like a golf course and could prove no bad thing.

We Love the Tram
Tenerife’s tram system TranvÃ­a continues to prove more and more successful with residents and visitors. Nearly 14 million travellers stepped on board Tenerife’s sleek, multi-coloured trams last year, an increase of 0.19% on 2010. That may not seem much but compared to a decrease in the usage of public transport in Spain it shows that Tenerife’s clean and cheap to use trams are whizzing along quietly and efficiently against the tide.

Remembering The Floods of 2002
As the island continues to experience a drought, Santa Cruz council remembered the eight victims of another extreme of weather that took place 10 years ago on March 31, 2002 when torrential rain caused flooding that devastated Tenerife’s capital. Homage was also paid to the people of Santa Cruz and the emergency forces who acted above and beyond the call of duty to assist fellow Santa Cruceros live through a terrifying natural catastrophe.

And finally the TIT (This Is Tenerife) of the week award goes to”¦ Driving Under the Influence in la Laguna
A car reversing the wrong way along Avenida del los Menceyes in La Laguna understandably resulted in a torrent of 112 calls to the local police from motorists forced to take evasive action to avoid colliding with the rogue vehicle.

Surprise number one for the local boys in blue was that the driver of the car going the wrong way wasn’t a getaway driver fleeing from a robbery or a tourist used to driving on the other side of the road; the culprit was one of La Laguna’s councillors.

To make a bad situation even worse, when the police finally stopped the car the councillor, instead of saying the Spanish equivalent of ‘it’s a fair cop guv’, jumped from the vehicle and ran down the road for 40 metres pursued by bemused police officers.

What didn’t come as a surprise was that the councillor was found to have been ‘driving under the influence of alcohol’.

Calling it an embarrassing situation for La Laguna’s council just doesn’t quite do it justice. And to cap it all, the tipsy culprit’s position is… Councillor for Social Welfare.