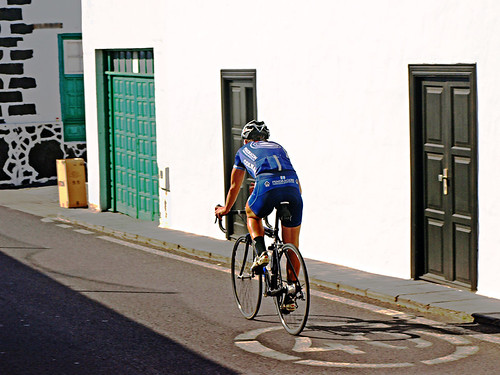 Tour de Tenerife
With almost impeccable timing considering the fears about visiting Tenerife roused by the fires of last week, Bradley Wiggins won the Tour de France and the British media stopped writing about fires affecting tourist parks and started writing ‘active tourists head to Tenerife’. The fact that Bradley Wiggins” high altitude training on Tenerife is being held up as a factor for his success in France is a massive boost for the island and should be the catalyst for the development of an active tourism strategy by Tenerife’s Government.
There are many locations that can offer high altitude training and there are places where athletes can train in warm weather throughout the year but Tenerife’s USP is that it offers athletes a combination that other locations just can’t match. Apparently Bradley Wiggins” training regime involved sleeping at altitude and training at sea level ““ a combination which means that athletes become acclimatised to getting more oxygen into the lungs and therefore more power to the muscles without suffering the negatives of sustained training at altitude (loss of muscle power and increased risk of stress on the body). Where else can you travel from 2500 metres to sea level in less than an hour and do so in warm weather whatever the month?

British Pensioners Living on Tenerife Affected by Changes to Spanish Law
British pensioners living in Spain will now have to pay a contribution towards their prescriptions due to changes in the Spanish public healthcare system. The new system means that many pensioners will have to fork out about 10% of the cost of the prescription. However, the actual amount is dependant on personal circumstances with different rates for those with an income of less than €18,000, between €18,000 and €100,000 and over €100,000. As each autonomous region is responsible for managing the new system, the British Embassy has advised that pensioners should contact their local health service to find out exactly how it will affect them. Good luck with that. We’re predicting that “¿QUE?” will be a common answer until this one gets bedded in.

Good News for Tourism
Despite an overall drop of 2.8% in visitors so far this year, June saw an increase of 4% on 2011’s figures, with 399,605 visitors arriving on the island. On the up were British, Dutch, Scandinavians, French, Irish, visitors from eastern climes and Russians (a whopping 40% increase). On the downwards slide were Germans, Italians and Belgians. The expected drop in Spanish visitors hasn’t occurred yet and 4.3% more than last year touched down on Tenerife in June.

Bad News for Education
Tenerife’s report card should have a big ‘could do better’ scrawled across it. A Spanish survey of the level of educational achievements amongst the Canary Islands” next generation found that schoolchildren in the Canary Islands came bottom of the class (alongside the Balearics and Andalusia). The Canary Islands” Government desperately needs to get to grips with the question of education. Places with low achievers at school also tend to be places with the biggest unemployment problems according to the study. And guess who has the highest youth unemployment? Time to get out of that corner, get the head down and do some serious studying.

Punish Misinformation on Social Media
Last week’s forest fires on Tenerife highlighted the good and the bad of social media during emergencies. The good was that information was passed on to the general public much quicker than newspapers could ever dream of achieving. The bad was that there was a substantial amount of misinformation as well. However, although publishing rumours and gossip is deplorable when it causes unnecessary panic and upset, we wouldn’t go quite as far as Tenerife’s President Ricardo Melchior who suggested perpetrators of misinformation on social media channels should be punished. He was particularly incensed by an image that had been published in Germany that showed, inaccurately, there were fires in the La Orotava Valley.

And finally the TIT (This Is Tenerife) of the week award goes to”¦ The North Tenerife Hospital
The fact that the North Hospital at Buen Paso opened months after it was supposed to doesn’t qualify it for TIT of the week award ““ delays are par for the course on Tenerife. But the fact that it opened when it clearly isn’t ready does. Apart from the fact that it won’t be fully operational for some time and signs within the hospital are so bad that not only are people unable to tell where different departments are, they can’t even tell which is the gents and which is the ladies toilets.
Even worse than the fact that there won’t be a bus service until the end of the month is that there is currently nowhere to park. The brave souls who ‘tested’ the new hospital out found they had to park on abandoned agricultural land and negotiate a load of pot holes to get to the hospital.

A hospital without a car park… incredible. The Keystone Cops would have come across as quite organised if they’d been based on Tenerife.

Learn Spanish: The key to discover the island

My Tenerife, A View From Jonathan Clarke