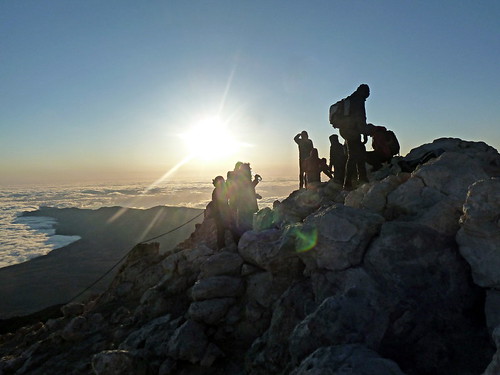 A barely perceptible lightening of the horizon heralded the approaching dawn sunrise, and I told Hans, my new-found trekking companion, that I’d see him on the summit. Abandoning the Kilimanjaro porters” mantra of ‘Pole, Pole‘ (slowly, slowly) I shot off, passing the neon, caterpillar-like procession of head-torches that had overtaken us earlier. I felt a bit funny – the effect of altitude and sleep deprivation – but the thought that I must be less than 200 metres below the summit sped me upwards. Soon I was on the crumbling crater rim, and joining the handful of early summiteers on the highest point of Spain and at 3,718-metres (12,198 ft) the highest point above sea level among all the islands of the Atlantic. 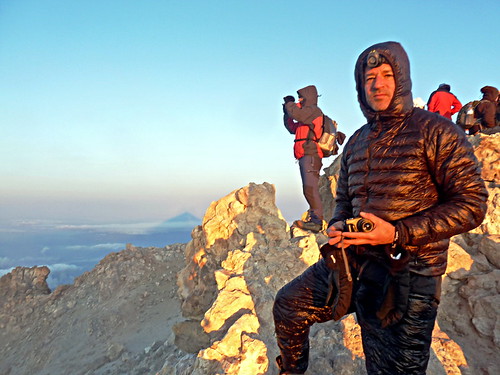 It was well below freezing, but I’d come enviably prepared – thick mittens, a lovely pair of down trousers and a down jacket, which meant I could really enjoy the summit experience. Those less clothed waited restlessly in the biting, sulphurous air for the first rays of the new day. Surely enough, the warm, golden sun rose above the blanket of clouds, and in the other direction, the immense pyramidal shadow of Teide was thrown across the island, then across the Atlantic, where the islands of La Gomera and La Palma – my next destination – jutted enticingly. A striking sight, and one I was delighted to see was shared by Hans, who had appeared, with a big grin on his face.

The vast Las CaÅˆadas caldera was now lit-up. I tried to trace my journey from the hair-thin Cañadas road far below, but apart from the obvious upper cable-car station, most of the landmarks were out of sight, or too small or camouflaged. 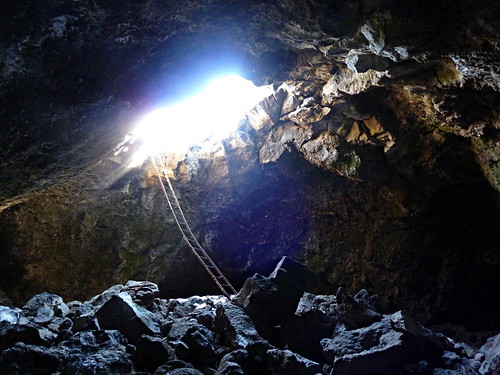 I reflected upon some of the features I’d encountered in this vast promethean landscape – dazzling pumice slopes, giant lava runnels, car-sized lava accretion balls ( the ‘eggs of Teide’), the eerie Cueva del Hielo (Cave of Ice, which I’d eventually found and descended, discovering only a smattering of snow); and the homely Refugio de Altavista (3260m) where I’d met Hans and shared a leisurely supper and a hurried breakfast.

I also thought back to standing on the summit of that other, larger, African volcano, Kilimanjaro and the curious parallels with this one. In 1894, before the refuge was erected Teide was ascended by a German adventurer who five years earlier had climbed Kilimanjaro (5,895m). The explorer’s name was also Hans – Hans Heinrich Joseph Meyer – and following his Tinerfeñan adventure he compared the two magnificent mountains, calling them “two kings, one rising in the ocean and the other in the desert and steppes“.

The totality of this was wonderfully satisfying – I’d also stood on the roof of Africa, and now I was atop the sulphur-smoking King of the Atlantic!