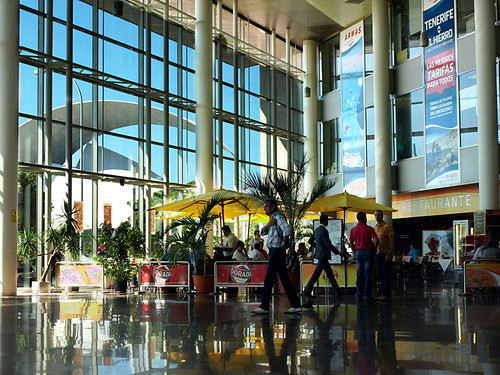 Santa Cruz Bus Station’s Sky Falls in
Luck ““ it plays a big part in all our lives however much we like to think we’re in control. How else can you explain why, when almost the entire ceiling (approx. 1000 square metres) of the bus station in Santa Cruz collapsed, it did so at 3.45am this Tuesday morning when the station was closed.

The area where the ceiling collapsed has been cordoned off but buses are operating as normal. Meanwhile a commission has been set up to determine why this potential disaster happened.

Accessible Isla Baja
Congratulations to Buenavista del Norte in the north west of Tenerife for being awarded Spain’s Queen SofÃ­a Universal Accessibility Award for towns with up to 10,000 inhabitants for 2011. The award is given to municipalities who have shown a commitment to making the environment, education, leisure, culture, sport, transport, tourism and new technologies more accessible to people with disabilities.

La Laguna’s Brazilian Beat
This week La Laguna was twinned with Anchieta in Brazil. Whereas a lot of town twinnings don’t seem to make any sense, the reason for this one should be immediately obvious to anyone who knows anything about La Laguna. The Jesuit, Father José de Anchieta, after whom the Brazilian town is named, was born in La Laguna in the 16th century and travelled to South America where he became revered for his humanist work with the poor to such an extent his nickname in South America is the Apostle of Brazil. As well as helping the poor, he also co-founded the city of Sao Paulo; it’s a pretty impressive CV really.

Don’t Come Fly With Me
There’s good news and bad news regarding the Iberian Airlines” pilots” strike due to take place between 18 and 29 December. The good news is that it shouldn’t affect flights between the Spanish mainland and The Canary Islands or the Balearics. The bad news is that up to 50% of flights between Spanish cities will be affected.

Tenerife on TV
You can’t go anywhere on Tenerife without tripping over British TV crews it seems. First of all Channel 5 were on the island shooting scenes for their Heaven on Earth series in Teide National Park, La Orotava, Masca, the Anaga Mountains, Garachico, Playa de las Teresitas, Siam Park and Loro Parque. Then over the last couple of weeks, the A Place in the Sun crew have been filming in locations around Tenerife including Golf del Sur and on the north coast. Heaven on Earth, A Place in the Sun…sounds like Tenerife should be in for some excellent publicity on UK TV during early 2012.

And finally the TIT (This Is Tenerife) of the week award goes to”¦The Parks & Gardens Department in Santa Cruz
Whilst the rest of modern Europe continues to ‘go green”, here in the Canary Islands the actions of some local authorities are also likely to make residents go green…but in this case for all the wrong reasons.
A lawyer in Santa Cruz is threatening legal action against the city’s Parks and Gardens Dept. following a number of complaints about children and pets falling ill after a visit to Parque GarcÃ­a Sanabria allegedly because of the pesticides used in the park to treat the plants. Pesticides which are banned in at least six other European countries.
When much of the rest of the world woke up long ago to the damage harmful pesticides can cause to the environment and the people who inhabit it, there’s no excuse for officials in Tenerife to be still sanctioning their use.
Thanks to the lawyer’s actions, the Parks and Gardens Dept have now stopped using the offending pesticides and have changed to biological products.