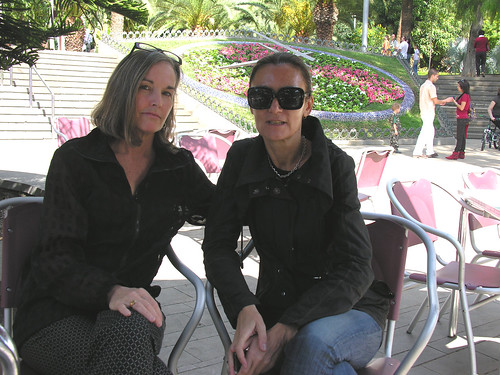 “One Santa Cruz, there’s only one Santa Cruz”¦” Well Hispanic countries have quite a lot of them, but I was unaware there was one in California, and even more surprised to find that the Tenerife capital has been twinned with it since 1974. Shelby Graham (left), Director and Curator of the Mary Porter Sesnon Art Gallery, University of California, is doing her best to strengthen those Atlantic links. Our coffee cups collided on my way to the Cielo/Sky Part Two exhibition at the Parque Garcia Sanabria.

As luck would have it, Shelby was joined by Miriam Durango (right), Curator of Circulo Bellas Artes in Calle Castillo, who helped set up part one of the exhibition in California last November. She proved to be an instrumental contact for Shelby: “I used the internet to research art and digital media in Tenerife and found Miriam. That led to 13 Canarian artists displaying their work with us, and now we are here with the work of 12 Californian artists, which runs until 11 March”.

So why is sky the theme? “It’s the whole vast concept and looking at it from different perspectives” explained Shelby. “Andrea Borsuk sees it from a feminist view, women bearing the weight of the sky; Jim Denevan makes giant patterns on sand by using a truck and they have to be viewed from high above”. 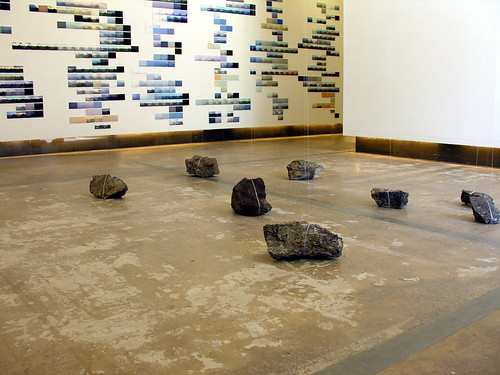 Entering the exhibition hall inside the park, the first work to strike me was Victoria May’s suspended local volcanic rocks. Shelby was quick to point out that they are of course only on loan. In the background a wall of small digital photos from Isabelle Jenniches had another link to Tenerife. ” These are of Japanese volcanoes and taken from internet webcams to give a compound view from high altitude”. 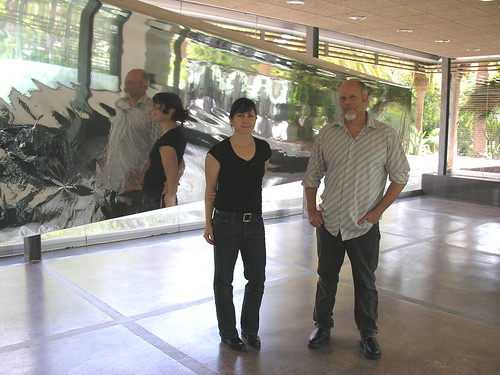 Some of the art is very cutting edge, I met Jennifer Parker and Barney Haynes and Barney explained their Sonic Sense project. “We are exploring solar winds and showing them in visual graphs on screen and using open source software to produce sound variations from gentle breezes”. Two large strips of suspended foil added a visual centre point for the exhibit. “When we saw this large glass sided room with the trees and plants outside we thought the Mylar, a foil developed for the space programme, would produce the ripples and distortions of star and sun tones”. I walked the channel between the foil and the collision and refraction of light was particularly eerie.

Back in the park Shelby told me a little more about the twinning link. “Santa Cruz California (above) is a university city close to San Francisco. We have great beaches and it’s popular with tourists and surfers, so you can see the similarities. I went to the opening parade of the Carnaval here last night, that was amazing and reminded me of a cross between our Halloween and Gay Pride celebrations. I think the twinning got overlooked for many years but hopefully this art project will lead to more exchanges between our cities”.

Cielo/Sky Part Two is on at Parque Garcia Sanabria until 14 March, 11am to 1pm and 6pm to 9pm Monday to Saturday, 10am to 3pm Sunday, entry FREE.

Petanque Bowls Them Over In Los Cristianos