It would take more than an invading armada to distract the Los Hermanos Petanque Club from their afternoon’s sport in Los Cristianos. Sir Francis Drake refused to desert his bowls at Plymouth Hoe, and he was threatened by the Spanish fleet. The slow graceful departure of the inter island ferries, was never going to prove more diverting for this cross-European gathering.

I arrived early for the club’s daily games at their split level courts, at the western end of Playa de Los Tarajales, and found a buzz of anticipation and preparation. Neat little carry cases were flipped open to reveal sets of eight metal balls, engraved with strange symbols and markings, and towels soon appeared to add a loving polish as the gravel courts were raked with a spiked broom. I expected to see mainly French players; the name petanque always evoked thoughts of Gauloises cigarette smoke drifting through the air and passionate disagreements over the finer points of the rules. Once I mingled and spoke to the gathering players, I found Britain, Spain, Italy, Denmark and Belgium all united by a gentle game that bonds them together.

There were a good 100 people warming up by now, so I picked the brain of former club president Bert Van Rossem from Belgium. “These are just some of our members,” he said, scanning the crowd. “We have 624 registered and play every day except Sunday, from 2pm through the afternoon. It’s just friendly four a side games, but once a month we play a big competition with lots of small prizes.”

There were a lot of ladies shaping up shots, but I had already learnt that the club name Los Hermanos (the brothers) came from an initial men-only rule, but the club had made many steps forward over the years. “We first started playing here about 20 years ago, all Belgians and just one British man, it was just rough land then and we marked it out as best we could. We registered as an official club with Arona council, and then four years ago they laid the concrete surrounds around the wooden measurements we set out. Now we look after the area and have an office in the old building that stands here.” Armed with a list of basic rules, I tried to appreciate the finer points of the game.The smaller ball, known as a jack, is thrown 6 to 10 metres down the court and players throw their balls in turn after drawing lots, trying to get as close as possible to the jack. The name Petanque derives from the French for “feet anchored” because players have to throw rooted in a circle of 35 to 50 cms in diameter. As for scoring, once the balls are all thrown, the nearest shooter to the jack scores with any balls nearer than their opponent’s best effort, and first to 15 points wins.

I could see that different actions were being used, some gave the balls plenty of air and some used a gentle underhand style, and if it was close to call, out came the tape measures. Most of the players were “mature” and some had a nifty little helper, a magnet on a string to pick up the metal balls at the end of a throw without bending over. When I think of traditional bowls, I think of white coats and caps and hushed silence, this is a much more jolly affair. All the players mingle and chat during the games and although the competition is keen, it’s very friendly. The palm trees around the courts offer some welcome shade, but the sun makes its presence known. Guaza mountain is bathed in sunshine and those busy ferries carve foaming channels in the still Atlantic. Another series of tell-tale metallic clicks and a few cheers signals the swapping of court ends; Petanque is one sport that definitely travels well. 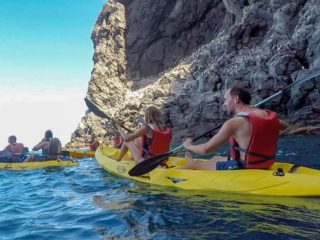