It’s never too late to show pride, CD Tenerife are finishing their relegation season with a flourish, even throwing in an away victory at Albacete by 2-1. The list of players missing through injury and suspension was a long one but coach Amaral has shown he has faith in the talented local youngsters from the high flying B team. This time Ayoze and Moreno made full debuts and both did themselves and the club proud. 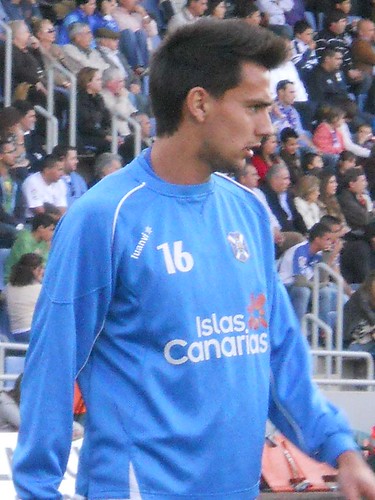 Sadly the drop to semi professional football means it’s shop window time for most of the senior players, Omar is one tipped to move on, he had an early chance but hit the post. Nino is a national Tenerife treasure and won’t be allowed to leave without major protests and pledges, again he was in inspiring form and won a penalty after 29 minutes and calmly stepped up to make it 1-0 to Tenerife.
Holding a lead has been a problem this season, a home break after 40 minutes stretched the CDT defence and Tato grabbed a leveller. Nino could have restored the advantage but found the woodwork against him just before the break. Tenerife came back out charged up, Bertran and Prieto (above) went close but with the pressure off the team there was always a chance of something special.
Julio Alvarez has discovered some form at last, too late to save him from the list of shame among fans but it was still good to see him convert a Omar pass after 75 minutes to make it 2-1 to Tenerife. German came on for Omar and gave the side even more of a youthful feel but it was still old hand Nino with 2 more raids on goal and experienced goalie Aragoneses with a super save that made sure Tenerife finished on top.