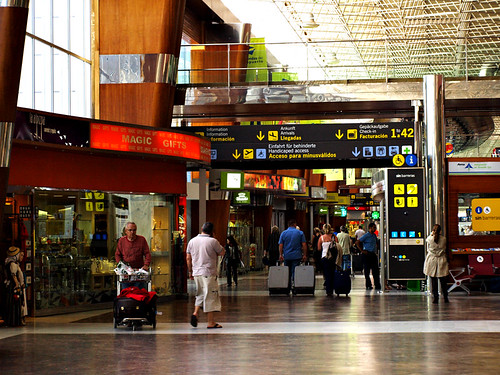 Tenerife at the World Travel Market
This week Tenerife’s political leaders have been at the one of the biggest tourism fairs on the planet, the World Travel Market in London. They’re in Britain’s metropolis promoting Tenerife as the perfect location with something to tantalise all travel tastes; from sun and beaches, through spas, sports and nature, to charming traditions and colourful cuisine. Pretty much the same message we push at Tenerife Magazine.
One newspaper quoted a government source as saying that the Canary Islands” stand at the fair was designed to “˜reinforce identity and at the same time providing a distinctive geometry with a bright, modern style that is sleek and at the same time able to convey a cosy atmosphere that reflects the warmth of the Islands’ (if you understand that, we’d appreciate being enlightened). Or in simpler terms, it’s getting this message across to weather beaten delegates at the WTM – “˜say no to winter blues.’

Latest News: The approach at the WTM must be working, the Cabildo have just anounced that Monarch have increase seats on flights from 264,000 to 344,000 whilst TUI have increased theirs by 24%.

Save Money at Tenerife South Airport
Good news for anyone passing through Tenerife South in November. AENA (Spanish airports) have introduced discount coupons for shops, bars and restaurants in selected airports across Spain including Tenerife South (but not Tenerife North) during the month. Discount coupons can be picked up at information points in the airport, in participating shops or even online and will entitle travellers to up to 50% discount on purchases. Maybe with one I’ll finally be able to afford to buy a coffee at the airport.

Multi-Cultural Tenerife
A few weeks ago we reported about 40% of the population of San Miguel de Abona being foreigners. This week the findings of a survey into the numbers of foreigners in Santa Cruz revealed very different patterns. Only 7.92% of the capital’s municipality are foreign. That’s 17,990 out of 227, 101 residents; less foreigners than there were two years ago when the figure was 18,718. Where it gets interesting is in the breakdown of what countries people come from. Whereas in San Miguel, British ex-pats made up the majority of foreign residents, in Santa Cruz they hardly figure. Instead it’s South Americans and Asians who make up the bulk of the foreign resident population, accounting for nearly 75%. The numbers of British fall somewhere between that and the one Jamaican who lives in the municipality. Unsurprisingly, hardly any foreigners live in the remote Anaga region (2.76%).

Smoke without Fire
On an island where temperatures stay warm throughout the year, you’re never completely out of the woods as far as the risk of forest fires are concerned. However, now that we’re into the winter season, when the risk of fire reduces dramatically, it’s time to say well done to Tenerife’s Medio Ambiente and Brifor (the forest fire service) for helping reduce the number of forest fires on Tenerife to 2003 levels. Between June and October, Brifor responded to 188 reports of fire, most of which were false alerts. In that period there were only three forest fires as opposed to thirty two in 2009; a positive result thanks to the efforts of Brifor and also a campaign to heighten public awareness of the risks of accidentally starting a fire. Not everyone has taken the campaign on board; only the other day I watched an elderly Spaniard throw his cigarette into the undergrowth in the middle of a banana plantation.

You Light Up My Life
Anyone used to driving along the TF1 between the south of Tenerife and Santa Cruz after the hours of darkness will know that some sections are so dark that headlights are barely able to make an impact on the all engulfing blackness. Additionally, lights from drivers coming in the opposite direction can make actually trying to see the road ahead even more difficult. Thankfully authorities have finally seen the light or rather have taken action to let drivers see it. Fifteen hundred new motorway lights were due to be turned on this week, making the journey between Arafo and Tabaiba that bit easier”¦and safer.

And finally the TIT (This Is Tenerife) of the week award goes to… Adeje Ayuntamiento
The Tenerife Government and Adeje Town Council are at loggerheads over the reopening of the Barranco del Infierno to the public. The south of Tenerife’s most popular walking route has been closed to the public for over one and a half years. Apparently the director of the Medio Ambiente, Wladimiro RodrÃ­guez, wants the Barranco del Infierno to reopen with the addition of signs warning about the potential dangers of walking in a ravine as well as advising that minors should be accompanied by adults who have full responsibility for them. But Adeje’s councillors say this isn’t enough to guarantee safety and are sticking to their guns about not opening the Barranco del Infierno until an acceptable safety plan is in place. It’s a position that has exasperated the Medio Ambiente director who sensibly commented that it’s impossible to give absolute guarantees when nature is involved. Maybe a signed papyrus from God might just do the trick.

Come on Adeje, it’s time to live in the real world.