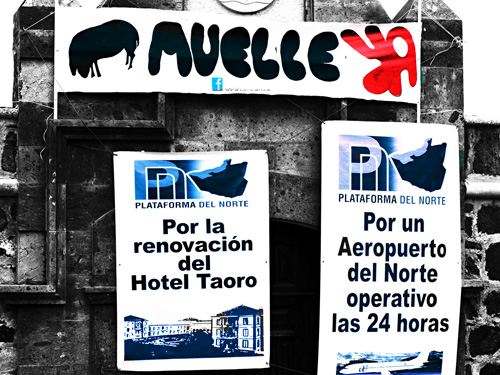 The Modernisation of Puerto de la Cruz
Last week saw the great and the good of Tenerife’s political world meet in Puerto de la Cruz to announce a 10 year plan to modernise the north’s number one tourist town.
The dynamic plan includes a new port; the renovation of the Hotel Taoro; the regeneration of the Playa Martiánez area; a new bus station, a new sporting complex, the extension of the Botanical Gardens, the development of a sustainable urban mobility plan; the renovation of important colonial houses as well as improvements to San Telmo, Mirador La Paz (surely only recently improved), 34 streets, 15 plazas and 4 parks as well as a few other odds and ends.
It all sounds wonderful apart from one tiny obstacle. There isn’t actually any money to pay for the 10 year plan. Are they having a laugh? How can you seriously announce a plan that has no funding attached to it? At least how can you do it without having a red face at the time? A plan with no budget isn’t a plan at all, it’s a pipe dream.

La Laguna Leads the Way
A big round of applause for La Laguna council who have already taken steps to simplify the application for certificados de viajes which will be required to get a residents” discount when travelling from September 1st. The council have already implemented a system where Laguneros can apply for their certificado online and download it for free. Let’s hope that other ayuntamientos (councils) take note of this Tenerife municipality that has its finger on the pulse. But by the state of some of their websites that might be too much to hope for.

Where Most People live on Tenerife
Statistics supplied by the Tenerife Government show that 41.3% of residents on Tenerife live in La Laguna and Santa Cruz ““ nearly 375,000 people in all. The biggest municipality on Tenerife in geographical terms is La Orotava followed, surprisingly, by Arico. In terms of density of population, Puerto de la Cruz wins that title, mainly because it is the smallest municipality covering only 8.73 square metres.

And finally the TIT (This Is Tenerife) of the week award goes to”¦ a clueless thief
Last week a patrol car in Santa Cruz stopped to help a man lying in the road who was calling for help. According to the injured man he’d been the victim of a hit and run. An ambulance was called and it was confirmed that he’d suffered a double fracture of his tibia. However, the police, suspecting all was not right, investigated the area and discovered an abandoned vehicle with a broken window just 30 metres further along the road. On the front seat of the vehicle was a knife and a number of packets of cigarettes of a quite unusual brand that just so happened to be the same brand used by the ‘accident” victim. Further investigation revealed that there had been no hit and run. The ‘victim’ turned out to be the perpetrator of a number of violent crimes during the evening. Whilst trying to steal the car, he’d fallen underneath it and it had run over his leg.
Sometimes the world works in wonderfully mysterious ways or maybe the car was a distant relation of Herbie from The Love Bug.