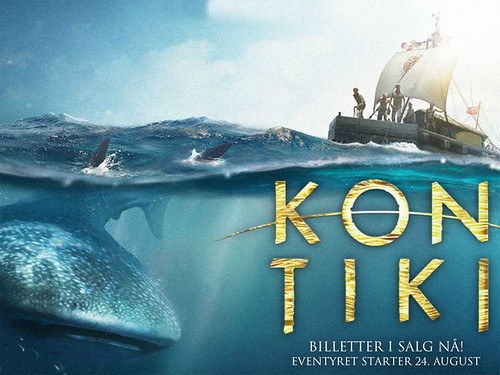 Look Out For Kon-Tiki
Fans of Tenerife’s Pyramids of GÃ¼Ã­mar should be interested in a new film by Joachim Ronning and Espen Sandberg (directors of Max Manus and Bandidas starring Penelope Cruz and Salma Hayek) which has its world premiÃ¨re on 24th August. Kon-Tiki chronicles the thought-to-be-impossible 8,000 kilometre journey made by Thor Heyerdahl in 1947 from Peru across the Pacific Ocean to French Polynesia on a raft made from balsa, bamboo and banana leaves.
Thor Heyerdahl’s connection with Tenerife is that he was instrumental in saving the Guanche pyramids at GÃ¼Ã­mar and bringing them to the world’s attention by developing the wonderful ethnographic park where they’re located.
To promote the film, a new Kon-Tiki has been constructed and has been sailing along Norway’s south east coast, heading into the Oslo Fjord in time for the premiÃ¨re. There’s a little bit of Tenerife on this new Kon-Tiki voyage as the banana leaves covering Kon-Tiki’s cabin are Canarian, supplied by the Pyramids of GÃ¼Ã­mar park.

Simón Bolivár was a Guanche
It was reported this week that one of the most famous freedom fighters of all time, Simón Bolivár, (who helped liberate Venezuela, Columbia, Peru, Bolivia and Ecuador and pretty much the whole of Hispanic-America from Spanish rule) had Guanche blood.
Although it’s known his grandmother came from Garachico, experts at Venezuela’s Institute of Genealogy claimed that they could also link Bolivár back to the Guanches who inhabited the island pre-conquest.
His complicated family network involves a twisting genealogical journey that links Simón Bolivár with Cristóbal de Ponte, founder of Garachico, who was known to have a Guanche “Mistress” who bore his bastard babies. But then so did many of the wealthy conquerors. The male Guanches having been killed in battle or sold into slavery, left the women at the mercy of the island’s new rulers. Subsequently there were lots of illegitimate births and the Guanche bloodline was diluted left, right and centre.
Apart from Guanche blood, the institute says that he also had Basque, Andalusian, Galician, Italian and Portuguese blood as well ““ they clearly had a great old time back in the day ““ so it’s unlikely that his statue in Garachico will be getting a goatskin pants makeover any day soon.

Tenerife is Heating Up… Again
It’s starting to look as though heatwaves are becoming a regular part of the weekend on Tenerife during this summer. The Spanish Meteorological Office have warned that another is on the way. Temperatures will continue to rise as the week progresses with the thermometer reaching the mid 30s by Friday and Saturday before cooling down again (if that’s the right phrase) from Sunday. The culprit is a weather front of hot air blowing in from Africa, which no doubt means more sand-filled skies.
The biggest worry with these continual heatwaves is the increased risk of forest fires. La Palma and La Gomera have been the latest victims of a combination of hot weather, tinder-dry terrain and human stupidity over the last few days. Let’s hope that this weekend there’s an outbreak of common sense to coincide with the heatwave and people actually pay some attention to the ‘no fires in the mountains” advice from Tenerife’s Government.

Perseid Shower Show Time
The Perseid meteor shower is back with up to 100 meteors an hour streaking across the sky at the height of the display. The best chance of seeing anything will be between 10pm on Saturday night and 2am Sunday morning and the same hours between Sunday night and Monday morning. Apparently the best direction to look for them is towards the north-east sky. All of which means there should be loads of people flat on their backs by midnight on Saturday in Tenerife. Sounds like just an average Saturday night down Veronicas.

Bird Brained
It’s hard to know whether to feel pleased or sorry for an owl rescued from a private home in Guia de Isora last week. The eagle owl, a protected species, was transferred from Tenerife to a specialist recovery centre in Lanzarote. So, our feathered friend was taken from an island with lots of lovely trees to one where trees aren’t exactly thick on the ground. It’s an interesting flight path considering there are wildlife recovery centres on Tenerife.

And finally the TIT (This Is Tenerife) of the week award goes to”¦ an Inability to Communicate
Ironically in a week when Canarios proudly read about Guanche links to Simón Bolivár, that police in La Laguna caused outrage by breaking up a procession celebrating Bolivia’s patron saint, the Virgin of Copacabana. Admittedly the procession, involving five hundred of Tenerife’s Bolivian community, blocked a road. However, the celebration has been taking place in the same place for eleven years and in previous years even the Mayor of La Laguna has joined in the party.
This year the Tenerife Bolivians apparently didn’t have the required authorisation to take to the streets to honour their patron saint.
Not that they appeared to realise that as the council had actually supplied a band for the event. A council spokesperson was quick to point out that sending a band didn’t imply authorisation. You can see why the Bolivians might have been a bit confused by that action.
As is so often the case in this wonderful and often frustrating island, an inability to communicate effectively lay at the root of the problem.