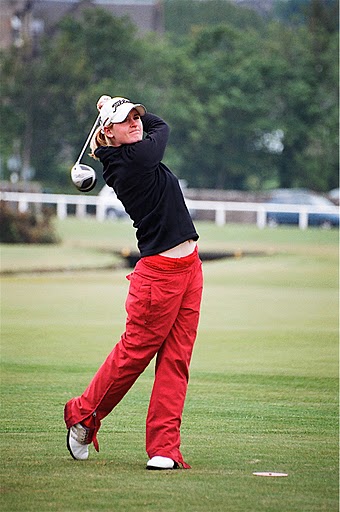 Yesterday I had the pleasure of having lunch and playing 18 holes with this 24 year old “Rookie” player on the Ladies European tour so I took the opportunity to ask her how she got started on a career as a professional golfer.

Ok, First the name, I’ve never heard of it before ?

Its an old family name, my mother,grandmother and great grandmother were all called Corisande so I was the one in the family in this generation privileged to be called after them,but most people just call me Cori for short.

When did you first get involved with Golf ?

I was a late starter only taking up the game at 16, I preferred football when I was younger , but dad who was an ex professional golfer before an accident which ended his career .My father talked me round to taking up golf so I took up the clubs and have loved the game ever since then. After leaving school I went to Myerscough College, Preston, for two years to study on their Sports Science with Applied Golf course with my dad acting as my coach.

What Handicap did you achieve ?

I joined The West Lancashire Golf Club in 2004, where I currently hold the course record, I played for the club and county and got my handicap down to +3 so after leaving college I decided to give the Pro ranks a try. I went to tour school twice missing out on my card the first time, as I had been out for some time before with a wrist injury, but in December 2009 at La Manga I finished 44th and secured a conditional tour card for the 2010 season.

What have been the high’s on Tour so far ?

People think its an easy job just playing golf and visiting nice hotels and golf courses, if only ! Being new to the tour I have to find my own accommodation and flights sometimes at short notice. I flew straight from the Portuguese Open back to Heathrow ,drove up north, home to Preston, and picked up another bag of clothes and headed to Manchester airport to fly out here to Tenerife, 24 hours and the only sleep I got was on the aeroplane.

Everything is new to me the travelling, the courses, the countries,the other players but I am loving it. I almost made my first cut last week,missing it by one shot, at the moment that is my goal, Oh! and to try and earn some money as we don’t get paid unless we make the cut.

Talking money is it expensive on Tour ?

Yes, I reckon about £1000 a week for every week I play, at the moment I only have Mizuno for golf clubs and Titelist as ball and glove sponsors, its very difficult for a young player, in this economic climate, to get a main sponsor to pay for flights and accommodation so at the moment dad is helping out. People don’t realise that we have to pay to take our clubs on most airlines and that can be an extra £100 on to every flight ticket.

How many events are you planning to play this year ?

I have played 3 tournaments so far this year and plan to play about 12 more. After Tenerife I have a two weeks off which I plan to spend practicing and relaxing at home then off to France followed by a month of tournaments in the UK so I should get home most weeks at some time.

Is this your first time in Tenerife ?

Yes, my first time, but from what I have seen so far the golf courses are great with super practice facilities and the weather is just gorgeous for playing golf. I have really enjoyed playing the Golf Del Sur course and the hospitality that was extended to me by the management, the free buggy
was a big bonus as we played 18 holes.

I had a great day with this young lady and I wish her all the best on tour she deserves it with all the practice and work she has put into her game. I hope one day to see her name on the leader board, who knows it could be right here in Tenerife this week. Corriesande Lee has her own website www.corisandeleegolf.com.
Tweet
Share9
Pin
Share
9 Shares

Quiet Class From Holland But Brazil Are Loud And Proud

The Ladies of the European Golf Tour descend on Tenerife