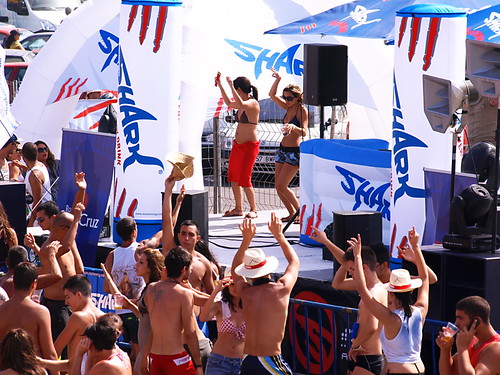 Santa Cruz the Party Town
Summer in Tenerife’s capital is really set to sizzle with news that the council has relaxed the opening hours for bars and open-air terraces in parts of the city. The extended opening hours relate to establishments within the area that includes Avda. MarÃ­tima, Avda. Francisco La Roche, Rambla de Santa Cruz, Avda. de las Asuncionistas and Calle San Sebastián. Throughout summer bars can stay open till 4am, clubs till 6am, restaurants till 2.30am and open-air terraces till 3.30am (Sunday to Thursday) and 6am on Friday, Saturday and festival days. Not everyone is pleased with this news but if the city wants to promote itself as a serious city break destination it needs a thriving nocturnal scene to compare with the best of Europe’s top cities.

How to Attract the Crowds in Tenerife
To put into perspective the embarrassingly low figures that turned out for the Michael Bolton concert last week, here are some figures from the Virgen del Carmen celebrations in Puerto de la Cruz. According to official figures (some bloke in a cap counting 1,2,3…) 130,000 people visited the town for the celebrations with around an estimated 53,000 cramming into the harbour area to watch the embarkation. Of course local fiestas are free and instead of Michael Bolton crooning Dock of the Bay you get a local singer belting out Ave Maria ““ so it’s no contest really.

Bow WOW ““ Tenerife’s Doggie Park
The council in Candelaria have created a park exclusively for the use of man’s best friend (should that be human’s?). The 5000 square metre park lies near the TF1 slip road at Punta Larga and is open for doggie business between 7.30am and 9pm every day. There’s one area specifically for small to medium sized dogs and another for the big guys ““ a bit of segregation there ““ and owners are responsible for cleaning up after their dogs as well as ensuring there’s no canine hanky panky…there will be young pups present after all. Apparently the municipality’s feline population are not a-mew-sed at this blatant display of favouritism.

What 110kph Speed Limit?
There’s been a lot of debate about the decision by the Spanish Government to reduce the speed limit to 110 kph earlier in the year. Doubt about its effectiveness continues with news that the result of a traffic survey revealed that only a third of Spanish drivers actually stayed with the temporary limit. Nearly 50% of drivers surveyed admitted to going over the limit every now and again whilst over 20% confessed to more or less ignoring the limit completely. The findings won’t really come as a surprise to anyone who spends a lot of time driving on Tenerife’s motorways. Rules? It seems traffic laws are treated, as Captain Barbossa would say, more like “what you’d call ‘guidelines” than actual rules.”

Problems in El Médano
It looks like café society is in danger of spiralling out of control in El Médano. Some residents are up in arms because they claim bars, cafés and restaurants have invaded pedestrianised areas with their tables and chairs; apparently making getting anywhere on foot in parts a difficult and risky business. The council are taking urgent action to stem the flow of tables and chairs especially as there are concerns that someone may get accidentally clobbered by a beach bag…clearly serious stuff.

And finally the TIT (This Is Tenerife) of the week award goes to…whoever is responsible for the English language movies on Tenerife
Whilst most of the world were treated to the last instalment of the wizard who has matured with a generation, film fans on Tenerife who prefer to see films in their original language had to make do with animated cars. It’s commendable that Gran Sur Cinemas screen an English language movie each week but by not choosing Harry Potter & the Deathly Hallows: Part 2 they not only disappointed HP fans on Tenerife, they also shot themselves in the foot economically as well. You have to wonder if the person who picks which English language movies are screened is the same person who advises the Sun Live Festival organisers about ‘famous” international singers. Before anyone suggests that film fans could always watch Harry in Spanish, here are two words that make that a serious non-option ““ Spanish dubbing.

Where on Tenerife is this? Photo Challenge #7 2011