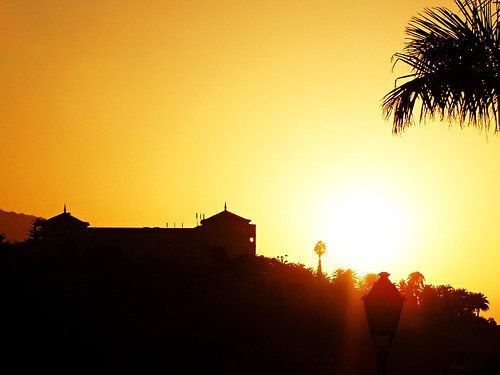 The Hot Rock
Summer got off to a sizzling start on Tenerife with the arrival of a heatwave bringing temperatures of 36C to southern and eastern parts of the coast and 38C in the hills. Whilst that might sound like heaven to anyone experiencing a damp squib of a summer elsewhere, the searing temperatures prompted the AEMET, Spanish Meteorological Office, to issue an orange level weather warning (in layman’s terms that’s dangerously hot). A thick dust cloud accompanying the hike in temperatures blotted out the sun and the scenery making Tenerife somewhat of a hot, sticky and hazy holiday destination. The heatwave should burn out by Thursday with temperatures returning to a more sunbathing friendly upper 20s Centigrade.

Blue Flag and WiFi
Having lost the blue flag status in 2011 for Playa del Socorro, Los Realejos council have shown that, after regaining the blue flag this year, they are serious about holding on to it in future. A series of initiatives should make it the most hi-tech beach in the north of Tenerife. First is the installation of a new webcam, the second is the addition of a defibrillator and the third is making the beach a free wifi zone. Apparently you can even swim and sunbathe there as well.

Canary Islands Top… for Lowest Salaries
Figures released by Spain’s National Institute of Statistics revealed that workers in the Canary Islands are on the lowest average wage in the whole of Spain. Although average annual earnings are €20,983 for men and €17,601 for women, the actual wage earned by the majority of people is much lower. For Spain that figure is around €16,489 and lower in the Canary Islands. Best paid region is the Basque Country where the average is €26,593. High wage earners, as in other countries, bump up the national average with the big earners being those who work in the utilities industries where the average wage comes in at a whopping €48,803. That explains how they work out the electricity bills then.

El Hierro Rumbling Again
Is El Hierro about to experience another eruption? With 238 minor earthquakes registered in 24 hours at the beginning of the week, the signs are there that it’s not beyond the realms of possibility.

Come on Baby Light My fire
The Midsummer San Juan celebrations lit up the island on Saturday night… literally. Firemen across the island were called out to extinguish 59 fires, most in the Metropolitan area. Thankfully none were serious ““ it was just an average hot San Juan night.

And finally the TIT (This Is Tenerife) of the week award goes to”¦ The Counsellor for Sports in Santiago del Teide
It was red faces all round in Santiago del Teide when it was discovered that an amount of money had been transferred from council funds to the account of a private team participating in the municipality’s Carrera de Montaña Almendros y Volcanes race. The money was transferred by Santiago del Teide’s Counsellor for Sports who coincidentally happened to also be the president of the racing team whose account the money was transferred to.
Apparently it was all a big mistake caused by confusion over bank account numbers and the money has now been returned to the public purse.