CD Tenerife’s soap opera of a season took another turn for the worse with a 1-0 defeat at in form Elche. That makes it 5 straight defeats for the Santa Cruz side, the defence changes from week to week due to suspensions, the midfield has no bite, and Nino is still battling on his own up front.
Sicilia and Melli were missing this week after last week’s sendings off and from kick off Tenerife sat back and let Elche come at them. When unchallenged Mateo met a corner to head the home side into a 17 minute lead we knew it was going to be another fruitless away day. Omar and Hidalgo squandered scoring chances and Elche keeper Jaime stood firm in goal while at the other end former Tenerife striker Angel looked menacing and had a strong penalty claim turned down just before the break. 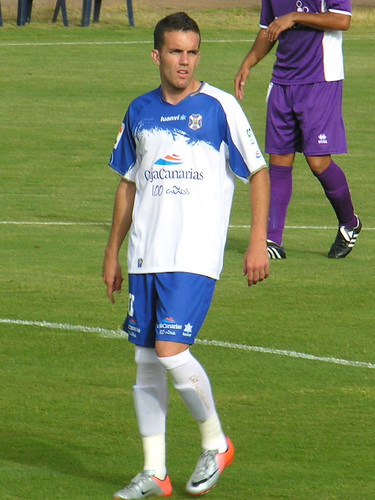 The second half followed a familiar pattern with Tenerife lacking the creative power to open up their hosts and Elche happy to sit on their lead. There was a nasty sting in the tail, Ricardo and Beranger got red cards in injury time and the foul mood of the dressing room boiled over with Ricardo and Alvarez (above) squaring up and needing security to seperate them. Seven points adrift from safety,CD Tenerife are scrabbling around for answers but time is now closing in on them and relegation beckons.

Tenerife Poised to Connect Europe to Africa and the Americas