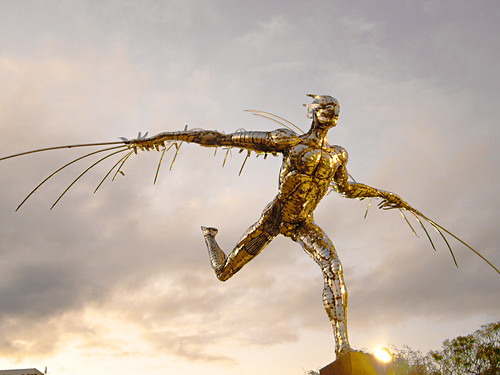 Canarios are worst paid in Spain
Once again the Canary Islands have topped a statistical table, this time for being the lowest paid workers in Spain, earning on average €16.29 per hour, way below the top earners, the Basque Country who come in at €23.09 (there must be a lot of high earners out there to make these figures the average). Newspaper comments blamed everybody from illegal immigrants to mainland Spanish to foreigners for the Canaries being at the foot of the stairs. As is usually the case nobody actually pointed a finger inwards or compared work experience and educational/vocational qualifications between Spain’s autonomous communities. With Wild West business practices being what they are on Tenerife, it was a shock that enough people had actually been paid to be able to provide the compilers with a statistical figure.

Robotic Tenerife
There are all sorts of weird and wonderful vehicles on Tenerife at the moment. Apart from the cast of Fast and Furious 6 pushing the pedal to the metal on Tenerife’s highways, a team of scientists were testing out a much slower vehicle on the Minas de San José in Teide National Park. The robot, called Idris, looking like a sort of intellectual quad, was brought to Tenerife by Aberystwyth University’s Department of Computer Science to spend a few days using the other-worldly landscape as a stand in for Mars. Maybe the money the island gets from the Fast & Furious crew using the ring road at Guia de Isora could be put towards actually finishing the dormant white elephant.

Not Open for Business
What do you mean you’ve never heard of the Teide National Park Visitors” Centre in La Orotava? It opened to a great fanfare a year and a half ago.
Possibly the reason that the flagship building has been somewhat anonymous since, is that when it enjoyed its inaugural opening it wasn’t exactly ready. In fact, 18 months down the line it still isn’t. There’s this crisis you see and funds are in short supply. All of which is understandable but does beg the question why throw an opening bash for an empty building?
There’s quiet optimism that the ‘new’ centre might be open before the year is out. But as it has taken eight years to get the Teide National Park Visitors” Centre to this unfinished stage, it’s probably wise not to hold your breath.

And finally the TIT (This is Tenerife) of the week award goes to… A Pair of Tenerife Truckers
Anyone who’s marvelled at the incredible work of talented La Orotava based sculptor Julio Nieto will be gob-smacked to learn that it’s thought a truck driver mistook one of his works, Icarus, for scrap and made off with the tragic fellow’s wings.
In a scenario that borders on farce, a truck driver responsible for transporting the steel sculpture left Icarus” wings by the side of the road in La Matanza whilst he moved the rest of the work of art (presumably his truck wasn’t big enough to take the lot).
Apart from the fact that leaving a work of art unattended by the side of the road seems – let’s be blunt – quite a stupid act, it looks as though the dim-witted truck driver was unlucky into the bargain. Another truck, with space to store a huge pair of metal wings, just happened to be passing on the same road at the wrong time and made off with an unexpected ‘scrap’ windfall.
Julio Nieto has requested that anyone who spots an unusual pair of steel wings flying about Tenerife get in touch with him on 670 800 265 as he’d like to reacquaint Icarus with his metal feathers. On Tenerife it seems that Icarus might have more chance of survival flying closer to the sun than keeping his shiny feet on terra firma.