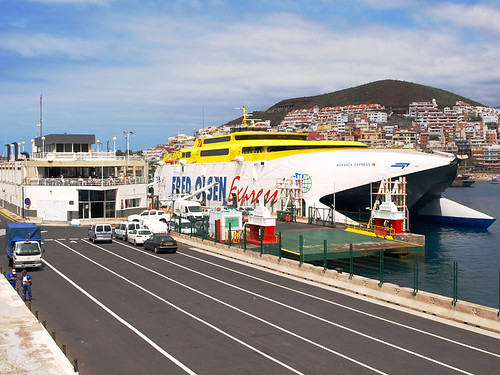 Stardom for the Singing Bear?
The most bizarre promo for Tenerife you’re likely to see this year is courtesy of cutesy popster Plato T. Bear. Presumably the T stands for ‘the’ but by the look of the Solar Flair website responsible for the music video, it could equally well stand for Tiberius. The bear and his cuddly animal backing group give a mesmerising performance of the song Love Like the Sun under Tenerife’s golden orb (as well as other sizzling locations). Watch it and weep. Whether that’s with laughter or pain, you’ll have to decide for yourself.

We’re on the Road to Nowhere
Although a British TV programme reported last week that the new ring road linking the south of Tenerife with the north via Santiago del Teide was operational, it isn’t. Not only is it not operational, it’s nowhere near being operational. With budget cuts already affecting progress, the road suffered another setback when the Tenerife Government announced that completion of the roadworks on the promenade in Santa Cruz would be given top priority in relation to what little funding was available. This means more delays for the ring road, although some people are claiming that the construction of a couple of bridges and some other minor works could have it open at the end of 2013. Vamos a ver, as they say.
There have been complaints that the metropolis is being favoured over rural Tenerife yet again. But if the choice is between tidying up the first thing that thousands upon thousands of cruise passengers see when they set foot on Tenerife or completing a road that wasn’t really necessary in the first place and will make the countryside less attractive than it was, what would you pick?

Cross Ferries
Canary Islands hopping may become more difficult in the future if the Canarian Government doesn’t pay it’s debts to ferry company Fred Olsen soon. The company claims that 18 million Euros is still outstanding from 2011 and if the debt isn’t paid they will be forced to cut some routes that aren’t bringing in the dinero. Most threatened would probably be the Los Cristianos to El Hierro route. With Islas Airways suspending flights last week and now these ferry tales, transport seems to be in a bit of a jam on Tenerife at the moment.

Money for Nothing
With newspapers each week printing reports about someone, somewhere on Tenerife being owed by the authorities it would be easy to point a finger at the economic crisis for the fact that the island’s piggy bank is looking decidedly anorexic. But each week newspapers print reports of works whose budgets have spiralled way beyond their initial estimate. Take the Santos ravine in Santa Cruz whose improvements were estimated at costing 18 million Euros but turned out to come in with a bill of 88 million Euros. The gap between how much a contractor says it will cost to complete a job and what they actually invoice for seems to be a bit like the gap between Grimm’s Fairy Tales and the Times newspaper.

Tourism Figures for Summer
Considering the tourist boost as a result of the Arab Spring in 2011, it’s no surprise to learn that the number of tourists who visited Tenerife in summer 2012 was nearly 6% less than in 2011. One of the biggest drops came from the British sector with 8.1% fewer sun-seekers this summer. Top of the tree for giving Tenerife a body swerve this year were Spanish holidaymakers who were down by 10.7%; again no surprise given the state of Spain’s economy. The trend wasn’t all downward, visitors from Eastern Europe continue to rise with 51.5% more saying ‘da’ to a holiday on Tenerife.

And finally the TIT (This is Tenerife) of the week award goes to… Striking Students
We’re not picking on the students for protesting at the way their country and island has been “Mismanaged’, it’s about time the Spanish did actually make a stand against amateur-time politics. But to stand in front of traffic at the end of last week when the roads were perilously slippery after the first decent rains in a long, long time was probably not the most sensible thing to do. On Thursday, the emergency services” Twitter account was full of reports of road traffic accidents as drivers ‘forgot” they had to adjust their driving habits when it rains or that cars have a tendency to skid on wet surfaces.
It happens ever year when the rains arrive after a long dry summer, and every year it still seems to catch a lot of Tenerife’s drivers by surprise.

Thankfully none of Tenerife’s students ended up as an RTA statistic and all will hopefully go on to protest another day.