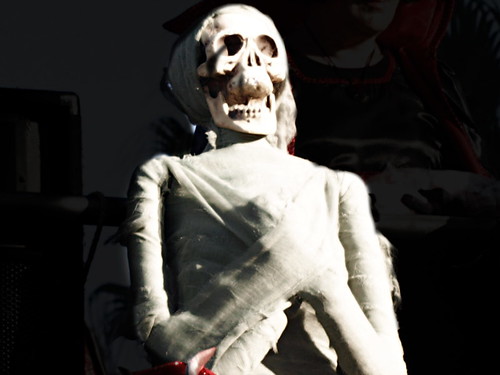 El Hierro Eruption Update
Despite continued earth tremors, the volcanic situation in El Hierro hasn’t changed much in the last few days. The stain on the ocean left by the volcanic discharge is moving slowly out to sea and residents of La Restinga have been allowed to return to their homes. Although some experts say that the eruptive process is possibly coming to an end, there are still some townspeople who are, understandably, nervous of actually staying in the town overnight.

For the moment El Hierro remains on a state of yellow alert whilst La Restinga stays on red alert.

Witchcraft on Tenerife
Appropriately in the week before Halloween comes reports of dark deeds and sorcery in the south east of Tenerife. Dead animals have been turning up at the entrance to the La Gallega cemetery in the hills above Santa Maria del Mar. Apart from slaughtered chickens wrapped in red handkerchiefs, coins and cards have been found at the entrance to the cemetery when dawn breaks ““ sure signs that witchcraft of some sort has been going on. But in true horror movie fashion, the jittery locals are keeping quiet, preferring to ignore the spooky goings on.

These stories turn up every year but no-one ever seems to actually hear or see anything taking place. Mind you, it would take a brave person to hang around La Gallega cemetery after dark, especially if they’ve seen The Wicker Man (the original).

The Mafia Sting
Tourists and residents were surprised by a massive police operation in Adeje last week which resulted in the arrest of 13 people (11 Italians, A Brit and a Moroccan) in connection with money laundering for the Italian Mafia. The operation was called ‘Pozzaro‘ – a Neapolitan word for hooded figures who cleaned out wells and probably a reference to the fact that the ‘family’ said to be behind the money laundering were from Naples. Most of the action was centred around the Marina Palace complex in Playa Paraiso. Anti-corruption officers indicated that the gang had been involved in illegal operations in the Adeje and Arona area relating to real estate and various other business sectors including hotels, restaurants and the sale of luxury boats and cars.

What was it La Orotava’s mayor Isaac Valencia claimed only last week? Makes you wonder if he knew something was afoot.

What is Geocad, the New Info Site About Tenerife?
The website says it’s a digital atlas for Tenerife and it does look as though it has loads of what could be interesting information about Tenerife. The new info site, www.atlastenerife.es launched by the Cabildo last week looks as though a lot of work has gone into creating it and, although there are a few glitches (some pages not being available in the languages stated and links not working), it’s still clearly work in progress.
We haven’t had time to fully study it yet but our first impressions are that although it appears to have information that isn’t currently available on other official sites, much of it isn’t particularly easy reading; some sections read a bit like a dissertation.
I found my attention wandering mid-way through paragraphs such as – ‘the Reworded Text of the Canary Islands Management and Natural Areas Acts hierarchically organizes planning, meaning that higher level plans (at island or regional level) draws a series of master lines that lower level ones (sector, municipal or local) flesh out for each individual space and way of territorial use.”

Someone order me a black coffee.

And finally the TIT (This Is Tenerife) of the week award goes to”¦Puerto de la Cruz Council
We can all become frustrated when we hear the term ‘strike action” being bandied about but sometimes workers have no other recourse. Take, for example, the situation with the cleaners and refuse collectors at Sufi Tarajal who are threatening an indefinite strike in Puerto de la Cruz from the 5th of December.

What’s their grief? They don’t want extra money or privileges or anything like that. They want assurances that they’ll be paid at the end of every month. Even though they are ostensibly council workers, it’s not a given that their wages will be in their bank accounts come pay day. This month they had to threaten strike action in order to force the authorities to pay their ‘overdue’ wages for August and September. If their wages aren’t in the bank at the end of October it’s ‘everybody out”. And who can blame them?

The culture of an aversion to paying people for work is rife in Tenerife ““ it makes the island seem backward and Third World in terms of business practice. But when you have some authorities setting examples like this what can we expect?

Reaching Out To The Stars From La Laguna