King Canute couldn’t hold back the sea and CD Tenerife couldn’t keep postponing relegation from the Segunda Division, that wall was breached so many times throughout the season and the damage was done. There are still 3 games to go but this 3-2 home win over Valladolid was full of fighting spirit and some good football but the next morning a win for rivals Nastic opened the trap door.
Tenerife took the lead after 15 minutes via a Dubarbier chip on the left, Nino could have already opened the scoring just before but the rebound from his shot eluded Iriome. There were again big gaps on the terraces, 6,150 is way down on the 16,000 that were turning up for most of the season. The lead was soon surrendered as Valladolid exploited the weakness on the right of defence that is known as captain Marc Bertran, Jofre set up Guerra who finished well. 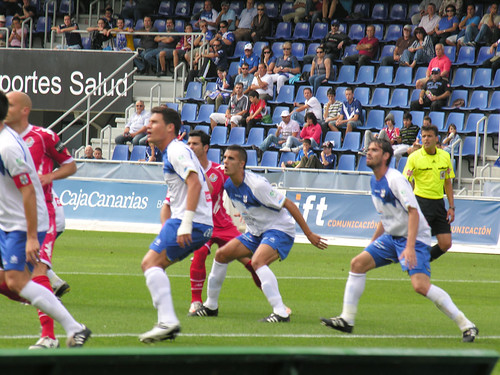 One of the constant problems this season has been the alarming number of yellow and red cards accumulated by CDT, Luna was off after 20 minutes but can feel very hard done by, the referee made a pretty savage call. It was going to be tough with 10 men and 5 minutes before half time a loose ball hit Bertrans hand and Sisi flighted a measured free kick to beat Sergio and make it 2-1 for the visitors. There was half time doom and gloom in the welcome shade at the back of the main stand but Omar and Josmar came on for the second half and changed the course and mood of the game. Nino is a little fire cracker up front for CD Tenerife, he had been smouldering slowly in the first half but ignited with the fresh young legs to help him and when the ball broke to him he charged at the goal and lashed his shot into the net. There was an air of defiance and relish about that shot that didn’t go unnoticed by the crowd and as his name rang out around the stadium his God like status increased by another few notches. 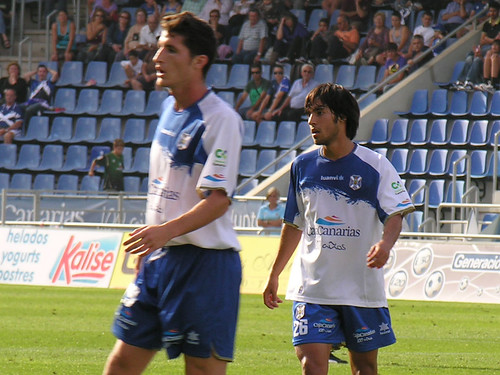 Another young gun, German, a big scorer with the B team came on soon after and added to the growing feeling of confidence. The latest home grown talent will be a key player in next seasons vastly changed line up but showed that he is ready to impress now. As another wave was launched at Valladolid German conjured the ball in the goal area and popped a cool pass back to Nino who banged in his 15th goal of the season.
Relegation was again on hold and the crowd had plenty to cheer about, all we have yearned for in these dark times is a show of spirit and hunger from our fallen heroes and this was it. Next season is going to be tough but at least the local young players offer hope for the future.