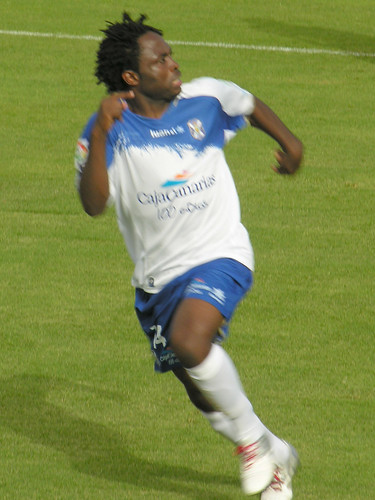 An away draw would have been nice and for much of the Tuesday night game at Cartegena that looked a realistic option but Luna and Sicilia kept leaving the central defensive door open and eventually the home side strolled in and made the game their own with the only goal.

Going forward Tenerife looked good and used their options well, Dubarbier made more inside runs to add to his left sided skill and Nino kept probing at the Cartegena defence. On at least 3 occaisions there was a parting of the way and Sergio Aragoneses had to show his agility and class in goal. The second half brought the decisive strike, Toche pounced on a through ball and saw the gap between the central defenders and was through and putting the ball past Sergio’s reach.

Not even a delayed debut for big striker Igor and a typically lively substitution from Kome (pic) could get Tenerife back in the game. It’s Carnaval time on Monday night with Barcelona B visiting Santa Cruz and with their recent goal hauls the defence will have to be on top form.

Anyone Fancy a Free Holiday at Sands Beach Resort in Lanzarote?

CD Tenerife Relegated With A Bang, Not A Whimper

@TenerifeMag
Our team had a great time at @NebulaCallao. Probably one of the best places for food and cocktails in Callao Salvaj… https://t.co/Mvtcknfs79
31 days ago
Follow