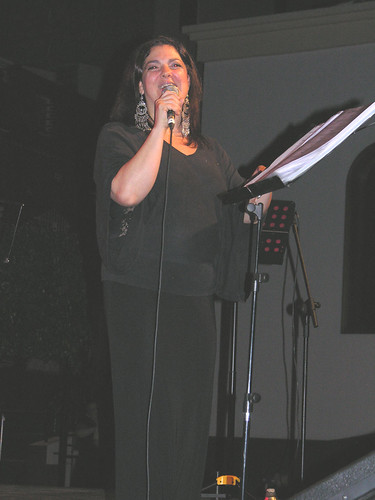 A voice in the wilderness? Sometimes that’s how it feels to Anna Rodriguez as she looks for new venues for her jazz performances in Tenerife. Talking after the Arona Jazz Festival had packed the crowds in at Los Cristianos church plaza, Anna was clearly delighted to see so many lapping up her set with guitarist Eliseo Lloraeda.

A love of jazz was passed on by her English mother as the family moved from London to Tenerife when she was just 3 years old. “My mum introduced me to the greats like Ella Fitzgerald and it inspired me to want to sing. Once I was at the British Yeoward School in Tenerife I started to sing a little and that was it, I had the performing bug, but it wasn’t until I was 26 that I did my first professional gig”. 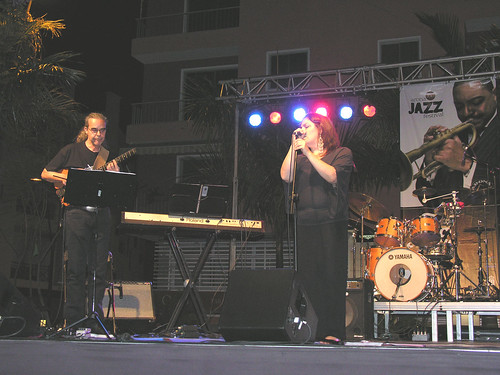 The young Anna was always open to other musical influences. “I love Brazilian music, salsa and pop, my mother liked a wide range of music and that stood me in good stead. It wasn’t easy to find jazz outlets so I sang in a variety of clubs, mainly doing commercial latin music but I managed to slip in a little pop, funk and bossanova”.

In 1995 Anna moved to Israel for 7 years and found a vibrant music scene. “Live music is very big out there and there was a good mix of clubs that welcomed all styles, that was a good learning experience”.

Moving back to Tenerife, Anna made jazz her priority and has built up a strong following with regular gigs in Puerto de la Cruz at Bambi Astoria and Abaco Mansion. With an eye to a wider audience, she has also nurtured an international audience through My Space and has been working hard writing original songs. “I have been writing since I was 16 and things are starting to take off on that side. I’m just putting together a couple of CD’s here, one with my friends in Three, and the other a solo project. My most recently written songs from the last five years will go into Breaking The Silence, the Three CD. Things are looking good in the UK too, a leading jazz record label is keen to add my CDs to their collection and distribute them, after they heard my work on My Space”. 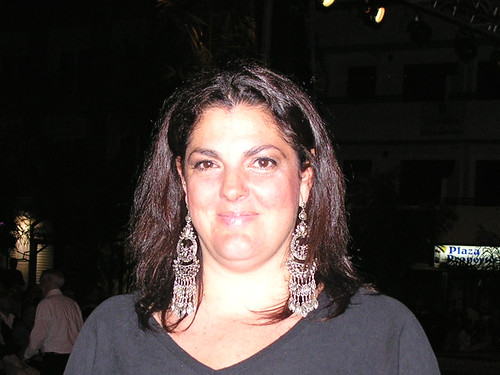 So how about the state of the live jazz scene in Tenerife? “I’d love to see more venues and openings for performers, there is definitely a demand. This is the fourth Arona Jazz Festival and it covers two nights but Tenerife is probably lagging behind the other islands a little. This summer I’m doing some shows in Fuerteventura and Las Palmas and I’m also planning trips to mainland Spain and Japan.”

These days Anna draws her inspiration from artists like Dee Dee Bridgewater, Rachelle Ferrell, Elis Regina and Sarah Vaughn. The Los Cristianos audience certainly enjoyed their taste of jazz, with Anna’s renditions of Funny Valentine, You Don’t Know What Love Is, and Message In A Bottle all getting a rousing response from those seated in the formal rows and the many more perched on the church steps and outside the local bars.

If you want to sample some of Anna’s music try

When Two Motors Are Greener Than One

Tenerife Photo Challenge #2 – Where in Tenerife is this?

The Replay On A Rising Musical Tide In Tenerife