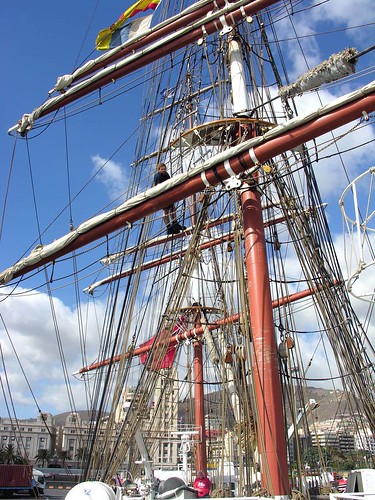 Scampering up one of the 200 foot masts of the sailing brig Stavros S Niarchos, second officer Ben Wheatley made it look easy. Having climbed the rope ladder, and worked along one of the slats holding the sails, Ben was just below the 12 metre high Up And Over platform, one of the initial challenges to crew members signing on for a Tall Ships Adventure to build character and team work. 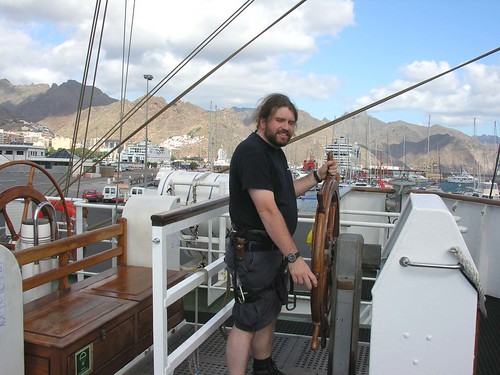 Santa Cruz and Portsmouth, the home ports of Stavros, are forever linked in history by a certain Horatio Nelson but these days there’s no need for press gangs. Up to 48 raw crew members of all ages pay to join the ship for week long voyages from its three month base in Tenerife. There are also 10 volunteer crew in key positions and six permanent paid crew who have worked their way up to Captains and Skippers. 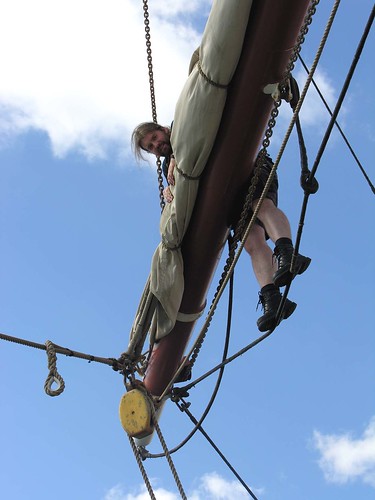 I caught Stavros between a Sea Shanty and a Wildlife Watch week as Ben explained. “We had two professional musicians on board to teach traditional sea shanty’s, when we came back into Santa Cruz from our tour around the Canary Islands we entertained a bar full of people. On the wildlife trip we have an expert to educate the crew about the animals we see.”

It’s not all music and mammals, Happy Hour is a jolly name for scrubbing the decks to music. There are also long watches to keep the ship manned around the clock, maintenance, steering, and hauling the sails. “Climbing the masts to set the sails is a small part of the job, they are controlled by hauling on ropes that are coiled on deck. We have a motor but like to use wind power for as much of the voyages as possible. On a good week the sails are our sole source of power for two thirds of the trip.” 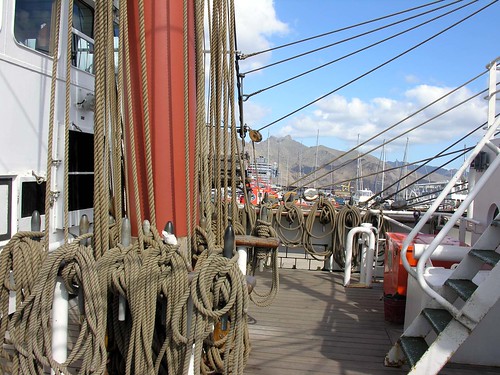 Topside the ship looks and creaks like a well worn eighteenth century rig but down in the modern hull the maker’s plate gives the true version, built in Appledore, Devon in 2000. The mess has a modern stainless steel kitchen, not a ship’s biscuit in sight, but the table area is cramped and the six cabins, each with eight bunks are best described as cosy. Sailors” possessions are limited to a locker and a small box. Ages on the voyages range from 18 to 75 and each work team (watch) is a mixed bag of ages and both sexes. No sailing experience is required for the adventures, it’s a big learning curve that includes map reading, course plotting, and lots of team work. 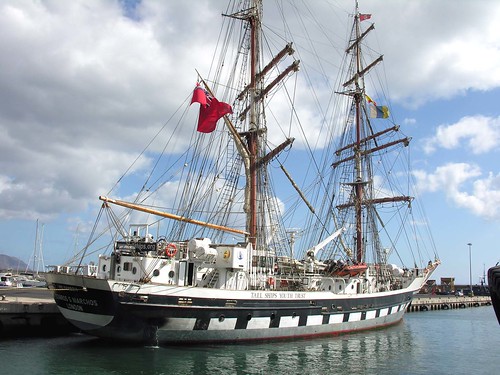 Ben has been riding the waves since dipping his toe as a raw crew member but seven years on he is dedicated and very happy with a routine of five weeks on and two weeks off. “We tell our new recruits you will learn a little about sailing but a lot about yourselves.”

If anyone fancies a nautical challenge there’s more information at www.tallships.org