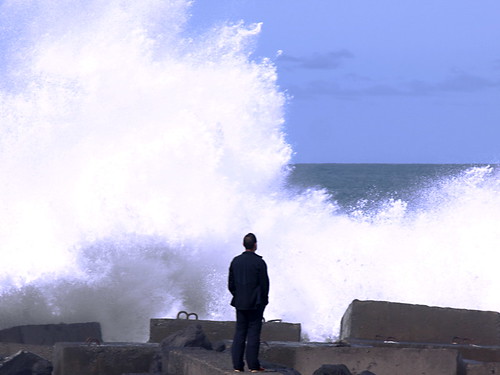 Mini Tsunamis Swamp San Andrés
In just about every way apart from one, it was a beautiful day on Tenerife on Monday. The sun shone and the temperatures soared…but unfortunately so did the waves. Whilst it was all calmness and sunny summer weather away from the beaches, the seas around the south and south east of Tenerife were churning like a cauldron. Whilst on Tenerife’s beaches this may have caused the occasional and quite fun rapid relocation of sunbeds, things were a bit more serious in places like the fishing village of San Andrés. Following advice from oceanic institutes, access to the village along the sea road was closed because of the danger of high tide surges. Throughout the day, the village was flooded by what residents described as mini-tsunamis for the second time in three months. One person’s playground is another’s disaster zone.

Giants of the Deep
Just like buses, nothing for ages and then you get two giant sea creatures coming along at once. If Hollywood was still filming the sequel to Clash of the Titans, Wrath of the Titans, they would have been able to save some money on CG given the size of the remains of giant squid discovered in the waters near Los Gigantes ““ estimates say that it could have been up to 8 metres in length when alive. As if that wasn’t enough, a 12 foot shark was caught near Poris de Abona. Unlike the squid, the shark was alive…until the fishermen got hold of it. Guess we know what will figure on the menu del dia in the Poris area for the next couple of weeks. It would seem Tenerife isn’t particularly good for the health if you happen to be a large sea creature ““ better sticking to 20,000 leagues under the sea.

Closing the Stable Door
Life isn’t easy as a new mayor on Tenerife who found his attempts to fight crime thwarted. Following the theft of nine newly planted laurel trees from La Victoria’s streets, the mayor authorized the installation of security cameras to try to capture evidence of any green-fingered thieves with plans to relocate the town’s landscaping. He was almost immediately advised by the local police to remove the cameras on the grounds he couldn’t simply install security cameras without going through a complicated legal process as it was an infringement on human and presumably tree thieves” rights. Poor man can’t even close the stable door after the horse has bolted.

La Cucaracha, La Cucaracha…
Residents in Los Cristianos are wanting the authorities to tackle everyone’s least favourite insect as some garden areas and the seafront promenade are crawling with them after dark. It might sound like a nightmare to some but The Canary Islands are sub-tropical islands and cockroaches unfortunately do exist. It’s not a new problem and much of the time most people aren’t really aware of them as they tend to be night owls and stay hidden till after a lot of people have gone to bed. Tenerife Magazine, being dirty stop outs, have walked the Los Cristianos promenade at 3am and it was an eye-opening and rather crunchy experience…still it made a long walk back to the hotel more interesting by playing a variation of avoiding the cracks in the pavement. One wit commenting in an online Spanish paper suggested that having so many “politicians” in one place at the same time presented a good opportunity to rid the island of a lot of them.

And finally the TIT (This Is Tenerife) of the week award goes to…Unofficial Car Park Attendants
Last week the police in Santa Cruz arrested a man in the act of breaking into a car. It turned out the thief was an unofficial car park attendant. His defence was that the owner of the car had asked him to clean it and then not paid him, so he was taking payment in kind ““ so that’s all right then. A couple of years ago there was a tragic hit and run accident in Puerto de la Cruz where the hit and run driver was another ‘unofficial’ car park attendant who had stolen the car from a couple who had refused to pay him to keep an eye on it in the local free car park.

It’s a practice that is carried out blatantly under the noses of the local police forces in towns and cities across Tenerife. Apart from being a nuisance and bad for tourism, its practitioners have on more than one occasion been guilty of the crimes that they are supposedly preventing. The perfect example of the police taking an inactive approach can be seen daily in the Noria district of Santa Cruz where police congregate to ‘keep an eye’ on the chic bar hoppers whilst ignoring the ‘unofficial’ car park attendants directing cars into a tiny plot a few feet away.

The burning question is why do Tenerife’s authorities allow this illegal practice to continue? We’d love to hear from any Tenerife politicians or tourism authorities out there who’d like to answer this one.