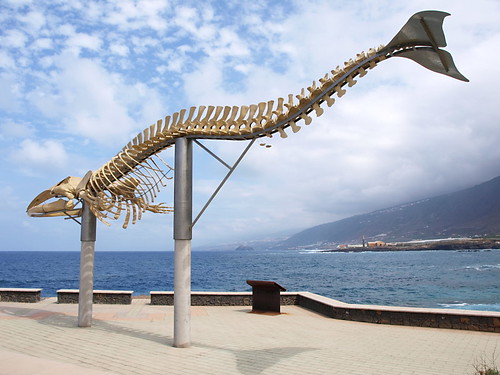 The Whale Cemetery
Most places would be content with one huge whale skeleton but not Los Silos in Isla Baja. The carcass of a sperm whale was brought ashore last week at Garachico’s ‘under construction” port and Los Silos wants it to pair up with the one that they already have on display on their coast. The reasoning seems to be that as having one whale skeleton has proved immensely popular, and has resulted in popular new events and festivals like Boreal (which coincidentally takes place this week), having two is going to be double the attraction. It could mark the start of a battle for the remains as it was brought ashore in Garachico and the authorities there might think that a whale skeleton might make a rather snazzy addition to their new port. We’ll have to wait and see.

Incidentally, the whale’s death was thought to be as a result of natural causes, possibly an infection, and not anything to do with human involvement.

The Flag of an Independent Canary Islands
It is interesting to note that the nationalistic Coalición Canaria (CC) party have started to use the ‘unofficial’ Canary Islands” flag in their political broadcasts. The flag is the same as the blue, yellow and white official flag except for the inclusion of 7 stars which tells you it’s the one for a more independent Canary Islands. It’s clearly a political ploy to win votes in the general election later in the year by pushing the ‘independent Canary Island voice’ card and playing on the island’s inferiority complex in relation to the mainland.
As is so often the case, comments attached to press reports were revealing. The CC were accused of being hypocritical because they stayed in 5 star hotels on Tenerife that were staffed by workers who weren’t Canarian. It’s a bizarre criticism, especially on an island where meritocracy is often an alien word. Surely, as is the case in most modern European countries, the person who is most qualified to perform a job should be given it, not simply because they have ‘Canario’ on their CV? That insular policy doesn’t do anyone any favours in the long term.
Anyone who thinks that a meritocratic approach is unfair isn’t facing up to the reality of what is required to make a successful business.

Last week the artistic director for carnaval 2012 was announced. One of the three main requisites for the post was that the succesful applicant had to be Canario…a much, much fairer recruitment policy then.

White Nights in Puerto de la Cruz
The noche en blanco (white night) initiative in Puerto de la Cruz on Saturday 17th September is a perfect example of the good and the bad side of Canarian organisation. A dream experience for shopaholics as local stores can stay open till 2am, the fun parts begin at 6pm with concerts, dance exhibitions, fun for the children, a fashion show, classic car exhibition and a party in Lago Martiánez. As an attempt to boost local businesses that’s the good part. Holding noche en blanco on the same day as Santa Cruz holds Sal2, a similar initiative, is the bad, and very typical of ayuntamientos not working together to ensure popular events don’t clash.

Another quite illuminating aspect in press reports about noche en blanco were critical comments that it was copying a model that had been successful elsewhere. Hello…replicating ideas that have proved successful in other places is highly recommended; it’s called not re-inventing the wheel.

This type of thinking might explain why some businesses in Tenerife often ignore business practices that have been highly successful for years beyond the island’s shores.

The Bone Collector
A man in Tacoronte was arrested after his house was found to contain what amounted to a museum’s haul of pre-Hispanic human remains and pottery. Where most people have tacky ornaments on their shelves, he had bones and skulls. Collecting pre-Hispanic artefacts was clearly a hobby and the man had built up an impressive collection. It’s unclear where the remains and pottery will end up but the bone collector is likely to be charged with collecting and hoarding items that are of cultural and social interest. Seems a bit harsh really, it’s not as though he was hiding kilos of cocaine. The funny thing is that there was an unofficial museum featuring exactly the same sort of items in a private house in Tacoronte in the mid 19th century.

The Hippy Hippy Shake
News just in that the theme of carnaval 2012 on Tenerife will be the 60s and hippies. How shagadelic baby…

And finally the TIT (This Is Tenerife) of the week award goes to… the port authority & harbour master in Los Cristianos
Traditional fiestas are a vitally important aspect of Tenerife’s culture. As well as being wonderful spectacles and great fun, they act as a social adhesive. They are especially essential in times of crisis. So a big boo-hiss to the port authorities and harbour master who seemed to be intent on pouring cold water (or in this cases limiting access to cold water) in relation to the Virgen del Carmen celebrations. This fiesta, which takes place without any fuss and nonsense in other fishing communities, involves a statue of the virgen being carried to the sea and taken on a trip around the bay accompanied by a motley flotilla of boats. Part of the celebrations involve lots of water based fun. Residents and tourists love it.

This year, however, the port authorities in Los Cristianos were determined to put a dampener on events by sticking rigidly to regulations and limiting the number of boats that could come into the bay as well as banning some activities. Even with the local council urging a more flexible application of marine laws the port authority and harbour master stood firm. Looks like they deserve jobs-worth of the week award as well.