The woman waved her hands to attract our attention.

“Are you going to eat at La Vendimia?” She asked.

“Wonderful,” she smiled. “I’ve just finished dining there and the food was fabulous. You’ve got to try the mussels…they’re huge.”

La Vendimia’s setting in the Hotel Spa Villalba in Vilaflor on the edge of the pines is perfect for a romantic culinary liaison. As dusk fell and the sky turned velvet, the patio lights on the restaurant’s terrace lit up the enchanting forest outside. 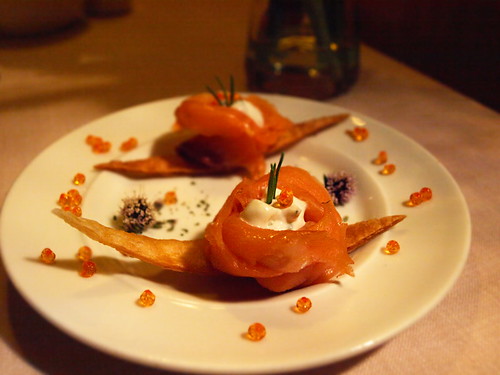 Inside, a soft colour scheme of oatmeal and beige contrasting with dark wood furnishings creates a tasteful, gentle atmosphere. Scenes of traditional country life on the walls and freshly cut flowers on each table serve as reminders of La Vendimia’s rural setting. A few tables were occupied by couples of varying ages, all of whom seemed to be enjoying the romantic ambience.

The seductive scene was set. A hike around the streets of Vilaflor had built up a bit of an appetite and so I was chomping at the bit to see whether the menu had the charm to romance my tastebuds.

The Main Attraction, The Menu at La Vendimia
I get a buzz out of being excited by a menu. Most of the time on Tenerife this doesn’t happen. That’s not to say that the food isn’t good, it’s just that menus often lack the imagination that rings my gastronomic bell.

This wasn’t the case with La Vendimia. 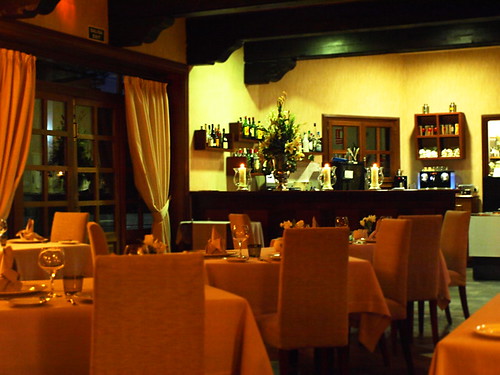 The menu was small, but boy was it select. Although there was a limited choice for each course, the descriptions of each dish had my tastebuds delirious with anticipation.

Tempura of vegetables from the hotel’s garden; creamy vegetables with crusty bread; pork loin in a honey and mustard sauce; garlic tagliatelle with clams…

I was glad there weren’t more dishes as I struggled to choose from the short list in front of me.

After a difficult elimination process we finally decided on vegetable tempura and the cheese plate with blueberry jam to kick off this particular culinary journey, followed by CÃ´te d’Azur mussels and the pork loin with honey and mustard sauce. Although it was unlikely that there would be any room left at the stomach inn, the lure of raspberry and mint sorbet and the restaurant’s house cake to finish off sounded too yummy to let pass.

To accompany the feast we ordered a bottle of Pagos Reverón, an ecological red wine from the owner’s vineyard.

Whilst we waited for our food, we were brought a wonderful looking and tasting appetiser of light pastry boats topped with smoked salmon, cream cheese and chives.

The cheese platter when it arrived looked attractively stylish and the blueberry jam added a fruity zing to savoury slices of manchego, semi-curado and queso fresco. However, the tempura was a revelation. I”M a huge fan of tempura and La Vendimia’s was in another class. This was the FC Barcelona of tempuras. 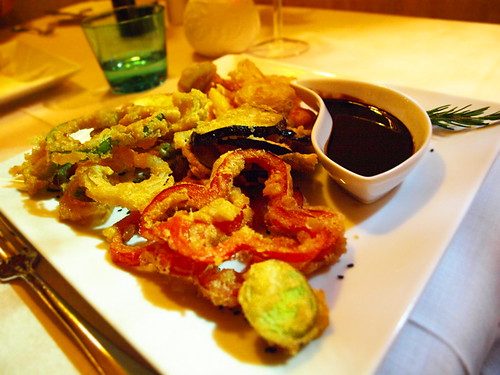 Courgettes, pumpkin, aubergine, artichoke, leek and red and green peppers encased in the crispiest of batters was possibly the best tempura I’ve had the pleasure to meet…and eat. I can’t tell you how good it was…and that was before it was dipped in the soy sauce.

The main courses were artistic in their presentation. Medallions of pork, squaring up to a potato gratin tower, were tender enough to be eaten using chopsticks whilst huge green mussels topped by a chipstick bonfire lay on a vibrant bed of vegetables.

All the dishes were an absolute joy to look at and, more importantly, to devour.

By the time we reached the dessert stage I was ready to wave my napkin in defeat but although the refreshing raspberry mint sorbet was the sensible choice, the cream, moist sponge and white chocolate ‘house’ cake that I’d ordered was worth risking dying from over-eating for. 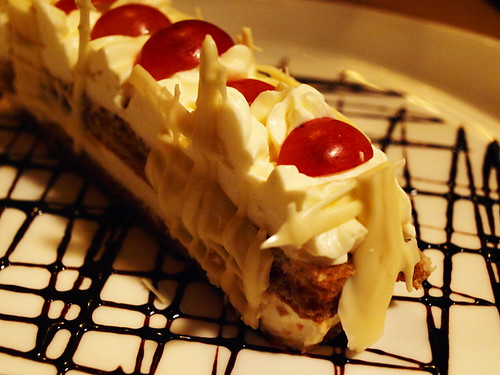 La Vendimia Summary
The rural setting is wonderful and if you’re looking for a romantic location that would confound many people’s image of Tenerife, this is the place. But dining at La Vendimia isn’t just about romance, even if the food does get in on the act by making love to your senses. La Vendimia is a restaurant for people who love food and who want to be wowed by cuisine that is creative and as fresh as Vilaflor’s mountain air.

Tenerife magazine’s five star rating for La Vendimia
Décor ““ 4 stars. Tasteful and fresh with some nice original touches such as stained glass panels and the depictions of rural life on the walls. Maybe slightly too brightly lit for setting a perfect romantic scene.
Menu ““ 4.5 stars. Small but diverse and appealingly creative. Lovers of good food will want to try everything on it. There are also choices for vegetarians. When we ate there there wasn’t a vegetarian main, but there were two vegetarian starters and the tempura was of main meal proportions.
Food ““ 4.5 stars. Overall the food just looked and tasted sensational. The tempura especially was simply one of those “Wow’ dishes.
Service ““ 4.5 stars. Smiley, friendly and attentive staff who seemed extremely happy in their jobs and that came across in how they interacted with customers.
Where, when and how
Part of the Hotel Spa Villalba in Vilaflor; +34 922 70 99 30; open 7pm to 10pm daily.
Prices
The average prive of a meal is around €25 per person. A bottle of wine costs from €10.

The Dangerous Park & Rude Guests in Tenerife News of the Week

The Adventures of Tintin: The Secret of the Unicorn