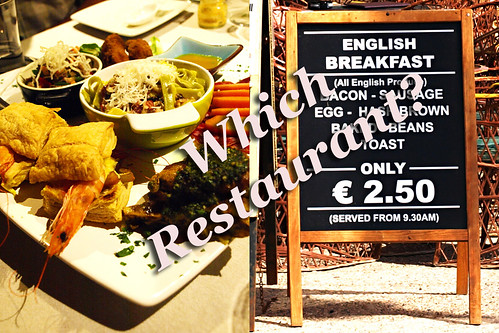 It’s now widely accepted that most UK residents researching a holiday abroad will use predominantly online sources before they book and for many, Tripadvisor is their first port of call.

But checking out Tripadvisor for a restaurant recommendation recently, it was surprising to discover which restaurants were ranked as the top three in each of Tenerife’s most popular resorts. Many of those currently holding these valuable positions were strangers to TenerifeMagazine.com, and indeed to the Tenerife Tripadvisor forum on which restaurant recommendations are frequently requested and given. With so much at stake, whose opinion is it that we’re trusting and how can we be sure that they would know a good restaurant if it walked up to them and introduced itself? It got us thinking…when it comes to restaurant reviews, does Tripadvisor really know its onions?

Success sells
One of the most interesting things that you first notice with the reviews is the number of people whose opening line is something along the lines of “we chose this restaurant because so many people on Tripadvisor had recommended it”. Having a good ranking on this holiday watchdog site is clearly worth its weight in gold and once you’ve managed to get into those ranks, success naturally breeds success.

Rating criteria
Anyone reviewing a restaurant on Tripadvisor is asked to give a rating of one to five stars, one being terrible and five being excellent, in the categories service, food, value, atmosphere. Interestingly, the only star ratings that show up on reviews are the overall average and the Service and Value, not the food, which is the main thing you would have thought most people would want to see.

Who do you trust?
Tripadvisor has come in for a lot of stick about the integrity of its reviews and rightly so, but to be fair to Tripadvisor, it’s a very difficult system to police effectively. Scrolling through the reviews given to restaurants that ranked at numbers one, two and three in the resorts of Costa Adeje, Playa de Las Américas, Los Cristianos and Puerto de la Cruz, a pattern began to emerge.

In the restaurants who’s presence in these lofty positions was a surprise, of those reviewers who had given the restaurant straight five star ratings, the vast majority had only given this one review or at best, this plus one other. In one case, out of 56 reviews giving five stars, 39 had only ever reviewed this restaurant and a further seven had only reviewed one other as well. In another case, a staggering 20 out of 27 five stars came from mainly first time reviewers, and in a third six out of nine.

What was equally interesting was that the majority of those making their first and only review and awarding five stars were in the last three months.

Convenience versus quality
It was intriguing to discover that the currently top ranked restaurant in Costa Adeje is hidden away, a fair walking distance from the coast and with 65 reviews to its name, which makes you wonder how on earth so many people had managed to find it in the first place. It seems that the restaurant is in fact located within a timeshare apartment complex and so is convenient for lots of holidaymakers for whom the walk anywhere else would be lengthy. And why go anywhere else when you’ve got a very good restaurant on the door step? There’s no reason to doubt that the restaurant has good food, but does it warrant best restaurant in Costa Adeje? One reviewer gave it five straight stars having only had two takeaway pizzas from it.

The same pattern emerged for the top ranked restaurants in Puerto de la Cruz, numbers one and two of which are not even in the town. The number one ranking, although clearly a very good restaurant, is in La Paz, in easy distance of Casablanca Apartments for all those who don’t want to do the climb back from town but way off the radar of anyone staying near the coast. The second ranked restaurant is in Punta Brava ““ a considerable trek from Puerto and located directly outside Loro Parque. Interestingly, the seven reviews for this restaurant all gave straight fives, were all first time and only reviews and six of them had been posted in the last eight weeks.

Menus
With one or two notable exceptions such as Coeur de Filet and Méson Castellano, the first twelve ranked restaurants across our four chosen resorts had menus that predictably catered to a British palate. Steaks featured heavily in the reviews with pizza and pasta hot on their heels and Indian and Chinese taking two out of the twelve spots.

Even where restaurants with more varied and creative cuisine crept into the top rankings, some reviewers marked them down because the choices didn’t suit them. At Méson Castellano reviewers who don’t speak Spanish struggled with the ‘no menu’ concept and had a less enjoyable dining experience whilst a reviewer at Coeur de Filet complained that when she asked the waiter if she could have chicken in her spaghetti carbonara, he tutted ““ personally I think he showed remarkable restraint.

Win a FREE holiday in Tenerife with GF Hotels