Several years ago I was wandering along Calle Castillo in Santa Cruz and I came across a small designer fashion outlet whose name I didn’t recognise. Browsing the racks, I could very easily have bought 70% of the stock. The clothes were bright, soft, well tailored and completely original.
Unfortunately at that time designer clothes on my budget were as feasible as snow on Playa Las Vistas and I left the store empty handed but with the memory of those designs impressed on my mind. 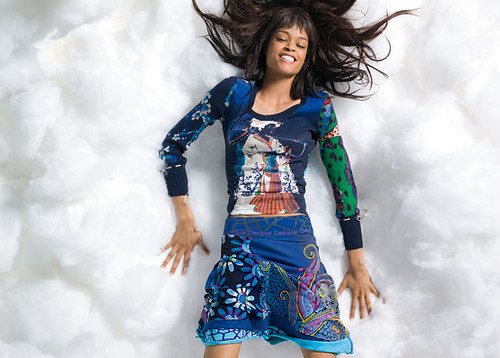 At the beginning of last year a dress caught my eye in a shop window in Puerto de la Cruz, a window I had passed a dozen times a week but which was usually so uninspired as to be invisible to me.
There was no mistaking it ““ the style, the cut, the colours ““ it was the designer label I had seen in Santa Cruz all those years ago. I looked at the label and committed it to memory.
It said Desigual.

Be yourself
Innovation, creativity and daring are the cornerstones of Desigual’s design philosophy. 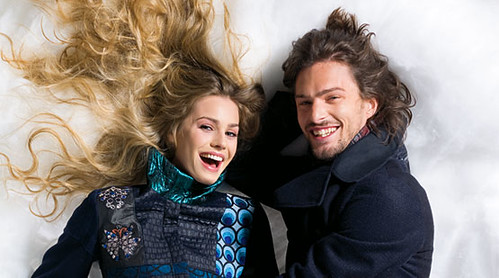 They challenge the world of anonymity and homogeneity, creating clothes that project an image of self confidence and optimism for people who aren’t afraid to stand out from the crowd.
What’s equally important for me is that their clothes, although predominantly directed towards a younger market, are stylish and individual without being ‘out there’ which means they’re accessible to all ages and sizes.
Beautiful tailoring ensures a flattering look in dresses, skirts and jackets which is another big plus point in my book. You don’t have to be a Kate Moss to wear them, although I”M pretty sure Kate would look sensational in them.

Originally known for its patchwork designs, Desigual collections include softer and more sophisticated uses of colour in sensual, easy to wear fabrics of silk, organza, cotton and linen. Everything is finished with hand stitching, highlights and beading and Desigual’s signature graffiti.

High profile
Founded in Barcelona in 1985 by Swiss business man Thomas Meyer, the company has seen phenomenal growth through the last decade and their stores are now a recognised worldwide brand.
In August last year Desigual hit the retail fashion headlines when they fought off rivals O2 and Mango to secure the former Disney store on London’s Oxford Street for a staggering £710 per sq ft, creating a new record for Zone A rents on the street and sending shock waves through existing tenants who feared commensurate hikes in their rent. 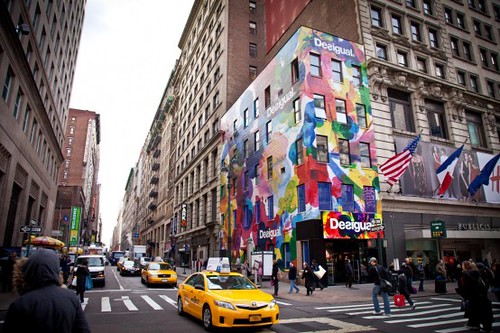 At their latest New York store opening they took a non-descript building in Herald Square, downtown Manhattan and commissioned Colossal Media to create a vibrant, colourful canvas on the building’s faÃ§ade. The block is now a Manhattan landmark and loudly proclaims the optimism that the company promotes.

Dream opportunity ““ nightmare scenario
I”M sure I’m not the only one who’s ever had that nightmare where you’re standing at the bus stop wearing just a vest which is too short to cover your bare essentials. 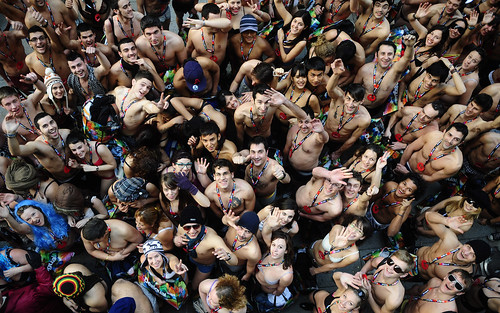 Well last summer in Barcelona, San Sebastian, Marbella, Madrid and New York that nightmare turned into reality for anyone brave enough to rise to the Desigual challenge of “come in your underwear and leave in Desigual”.
The company invited customers at their stores to arrive in just their underwear and the first 100 would be clothed for free in whatever garments they chose. Everyone else in line in just their underwear got a 50% discount.
I”M guessing the phrase “would you like that wrapped” wasn’t much in evidence that day.

Adding a little je ne sais Lecroix
With the unveiling of the new Autumn-Winter 2011-2012 Dream collection, Desigual has taken a bold new step and is teaming up with Christian Lacroix to design 30 garments. 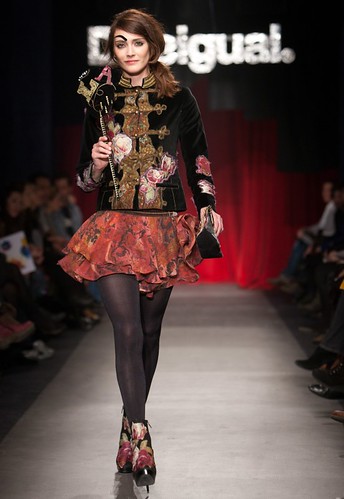 Monsieur Lacroix said about Desigual: “I was awestruck by the first girl dressed by desigual that I saw in Paris. As I watched her, I could recognise in her a member of my own tribe. It was an explosion of colors and patchwork under the elegant, discreet and always monotonous French sky. It was fantastic, truly love at first sight, a breath of fresh air, all multicoloured, scorching, revitalizing, radiating Mediterranean colours and flavours and creeping into this global and colourless magma inhabited by zombies and clones.”

Whilst I suspect I may well fall into the category of “zombie and clone” in Monsieur Lacroix’s rather excited description, redemption is on the horizon. On a short trip to Santa Cruz de La Palma last week I bought a Desigual dress.
This is haute couture at prices even a writer can aspire to, but I got my dress half price in the sale. There’s still a hint of a grin on my lips even as I type.

Stores
There are 235 Desigual outlets across the UK ““ check their website to find your nearest.
On Tenerife there are outlets in La Camella, Chio, Icod de Los Vinos, La Laguna, La Orotava, Los Cristianos, Puerto de la Cruz and Santa Cruz. Addresses and locations are shown on the website.

Online
Desigual have now launched their online store so you’ve no excuse for not grabbing a bit of this positive outlook without leaving the comfort of your keyboard and what’s more, there are sales on at the moment.