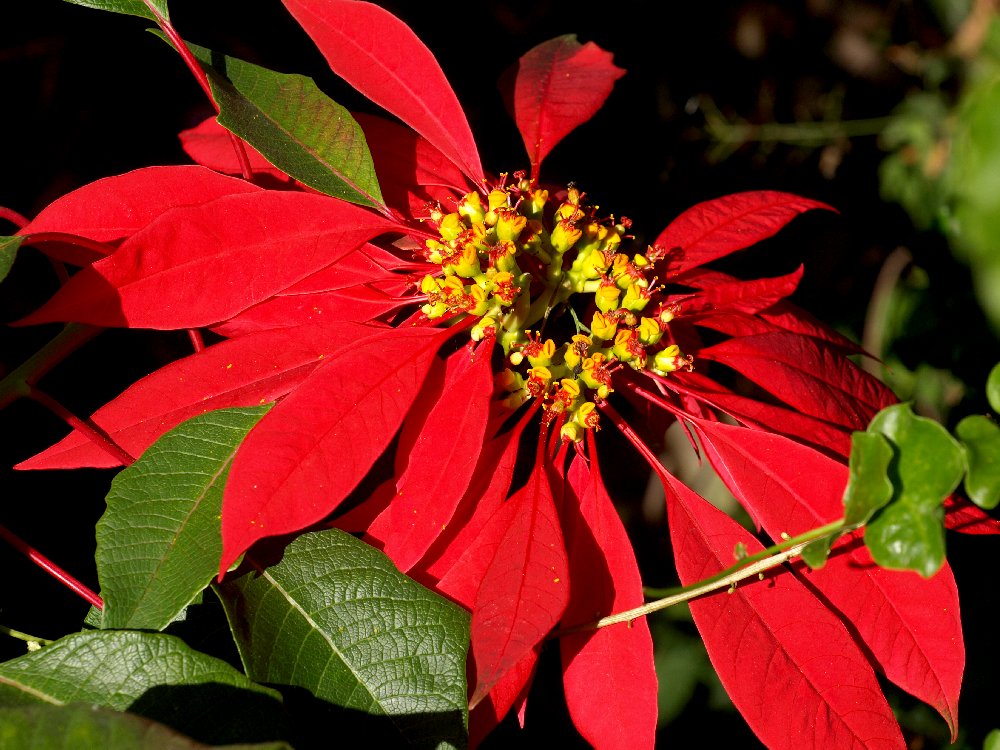 December 12th is National Poinsettia Day.
Tradition dictates that you should give a poinsettia on that day and it gives us an excuse to feature this most enduring of Christmas icons which brings a splash of crimson delight to the festive season.

On Tenerife, poinsettias grow wild at the side of the road, particularly around the north of the island where fed by winter showers they can reach up to ten feet in height and produce huge double heads of bracts (clustered leaves). From the end of November through to early February they turn the landscape into one big Christmas wonderland, well… a sort of tropical Christmas wonderland.

Flower facts
Originally from Mexico, it’s the plant’s bracts that produce their trademark crimson hue; the flowers are yellow and quite insignificant. Contrary to popular opinion, the poinsettia isn’t actually poisonous although the sap can cause minor skin irritation. Tests have shown that vast quantities of the plant would have to be consumed to cause any stomach upset, so here’s a piece of advice”¦ don’t eat all the poinsettias!

What’s in a name?
The botanical name for poinsettia is Euphorbia pulcherrima, meaning “˜very beautiful’. In Chile and Peru the plant is known as the Crown of the Andes but in its native Mexico and other Spanish speaking countries, they are known as Flores de Noche Buena or flowers of the Holy Night.
This name comes from the story of Pepita, a poor Mexican girl who had no gift to lay at the feet of the baby Jesus at Christmas Eve mass. Her cousin Pedro tried to cheer her up by telling Pepita that if given in love, even the humblest of gifts would please Christ. So Pepita picked some weeds from the side of the road and as she laid them at the feet of the Christ, they burst into brilliant red blooms ““ flores de noche buena.

Business is blooming
Poinsettias are the biggest selling flowering potted plant in the US and over the six-week run up to Christmas a staggering $300 million will be spent on some $75 million plants to decorate homes and offices.
There are over 100 varieties of poinsettias available and according to the Vancouver Sun, many attempts have been made over the years to seduce consumers away from the traditional red.
Horticultural experimentation to date has seen the production of blue and speckled poinsettias which sound rather nice. There was an attempt to create a poinsettia for the punk era by giving it crinkly bracts, but to be honest it’s more Wrinkled Rose than Johnny Rotten. But things went too far a few years ago when horticulturalists attempting to produce psychedelic poinsettias were clearly under the influence of hallucinogenics themselves and produced plants featuring pink with purple blotches and yellow with orange blotches.

Despite these floral seductresses the overwhelmingly most popular choice for the Christmas poinsettia remains pure, true red.