Known as the ‘island of eternal spring’, with its mild climate all year round and green landscapes, Tenerife is the largest of the seven Canary Islands. Its mountainous terrain reveals lush valleys, dramatic cliffs and moonlike rocks that are crowned by the majestic Mount Teide, an active volcano that rises 3,718 metres above sea level, making it the highest point in the whole of Spain.

With scenery like this and pretty much guaranteed good weather, you have all the ingredients you need for the perfect road trip to explore this incredible island over a few days.

Puerto de Santiago on the West coast is a great starting point to take to the road, but before doing so, a visit to this town is a must for two reasons. In the south, you will find Playa de la Arena, a jet-black sandy beach with some spectacular volcanic rock formations around it. 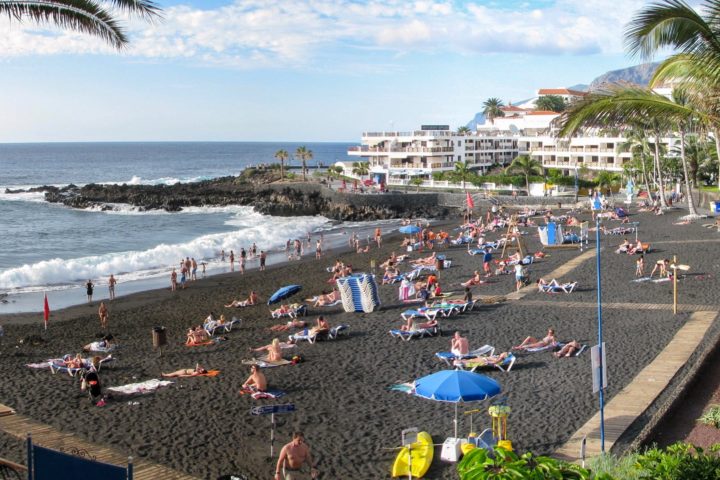 In the north, the small seaside resort of Los Gigantes, nestled into the breathtaking cliffs of the same name, translated as The Giants. Admire these imposing 300-metre high cliffs from the Mirador de Archipenque, on the approach road to the town. 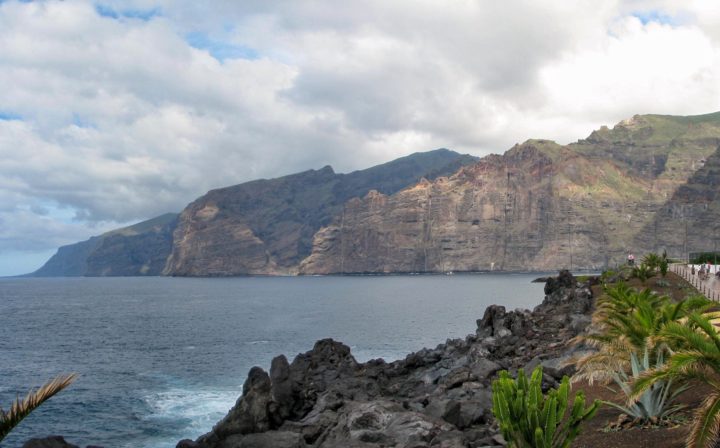 From Puerto de Santiago take the steep winding road up to the Parque Nacional del Teide, where there is so much to do, you can easily spend a whole day here… or even longer. The National Park consists of two huge craters separated by the Roques de García, a group of rock formations in the Las Cañadas Caldera and the most visited attraction in the island. It’s so popular, that the Roques de García were once featured on a Spanish note, before the Euro. There is a walking trail here that takes you through moonlike landscapes made up of pinnacles and ancient lava fields that have turned to rock. 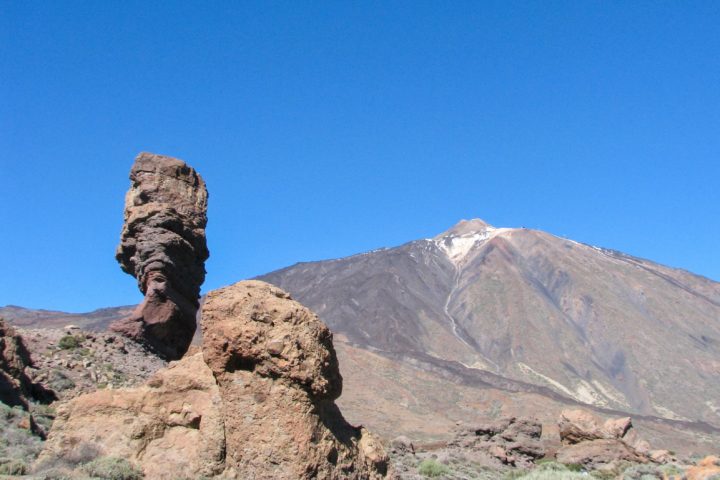 In the summer you can climb to the peak of the volcano, but it’s a gruelling 5-hour climb for hard-core hikers. But don’t despair. You can still access the summit by taking the cable car. Just make sure you are prepared for the cold. No matter how hot it is at sea level, the drop in temperature at the top tends to catch people by surprise.

If you are thinking of climbing to the peak, you will need to apply for a permit in advanced. This can be done online (https://www.reservasparquesnacionales.es/real/parquesnac/usu/html/detalle-actividad-oapn.aspx?cen=2&act=1) and it’s free and pretty much instant.

Within the National Park, you can also visit the Teide Observatory, one of the major international astronomical observatories, on some days of the week. You will need to book in advance and confirm opening days.

If you have spent a whole day on top of Mount Teide and the national park, head north to Masca the next day. Masca is a little village perched on top of a lush outcrop surrounded by rocky cliffs. Anyone who sees a photo of Masca could be forgiven for thinking it is located somewhere in Hawaii. 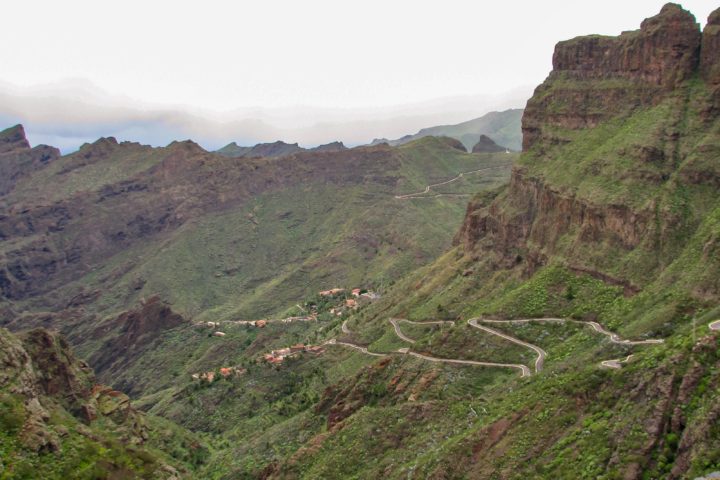 The drive to the village skirts around the cliffs and it’s both terrifying and exhilarating, and it’s definitely worth doing. 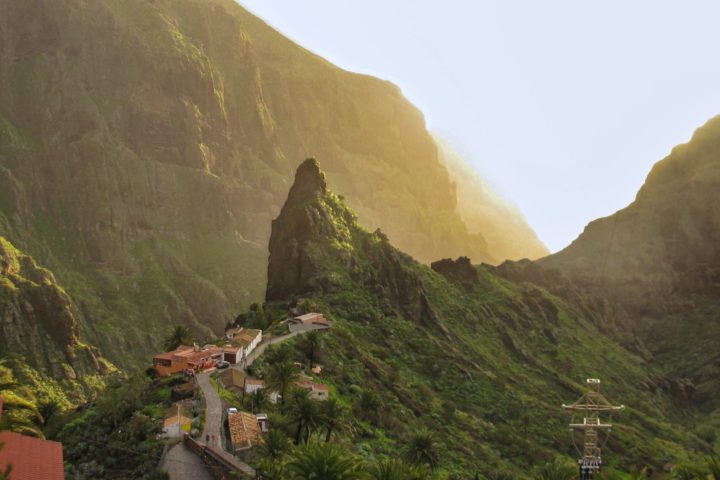 If you do have time, it is possible to walk down the gorge from the village and come back. It’s a very tough trek, but you will feel like you’re within the set of Jurassic Park and you almost expect a dinosaur to appear around the corner. One thing you will see is lots of bats, who live in the caves on the rock face. 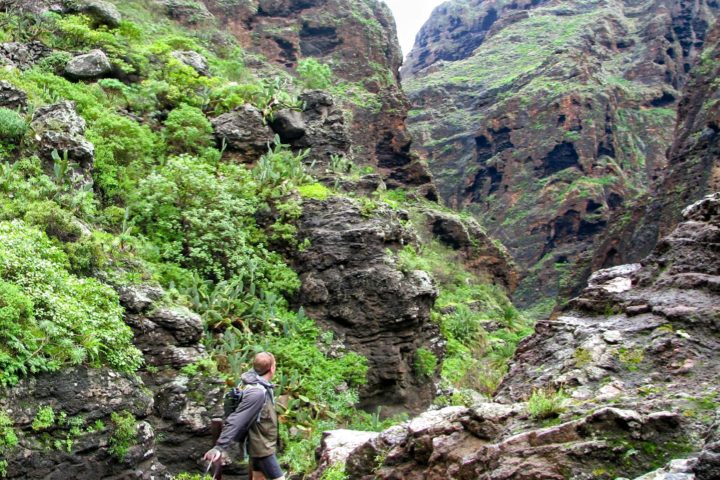 If you plan to do this walk, remember that you will have to come back up, so start very early in the day to avoid getting caught out in the ravine in the dark. I cut it a little bit fine and it was slightly unnerving, as you are completely cut off from the world. But don’t let this put you off. It was one of the most spectacular treks I have ever done and it’s one of my best memories of Tenerife.

For those using public transport, there is the possibility of getting a water taxi from the shore when you get to the bottom of the gorge, but check what time the last one is as you don’t want to be left stranded there.

Garachico is not only a town that sounds cute, but it also looks cute. It is one of the most picturesque towns in Tenerife, but it is also said to be the unluckiest. Legend has it that a monk who was expelled from the town put a curse on it and the next day Garachico was destroyed by an eruption. The eruption part of the legend, however, is real. 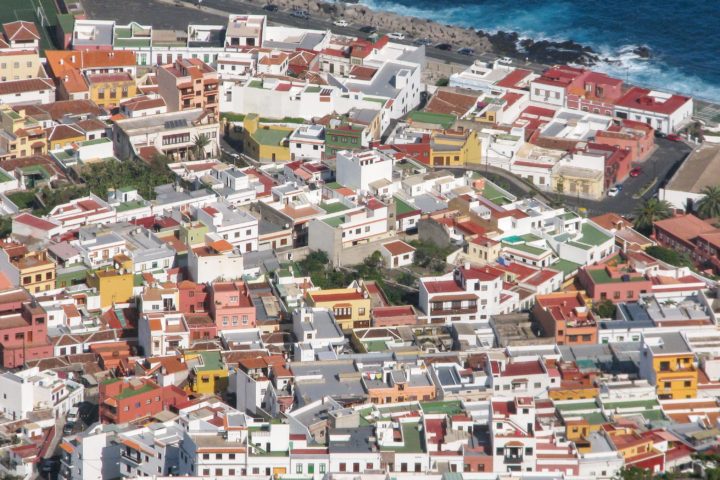 It is now a sleepy town with a traditional Spanish charm. It is set at sea level but due to the eruption, there is no longer a beach. There are, however, numerous natural pools formed by the volcanic rocks. A lovely place to sunbathe and relax, as long as the sea is not too rough.

Up the hill from Garachico is Icod de los Vinos, famous for being the home of a very old tree. But this is not just any tree, it’s a Millenary Dragon Tree that has become the symbol of the town. A visit to this umbrella-shaped tree is a must, as is a walk through the shady cobbled streets and beautiful squares. 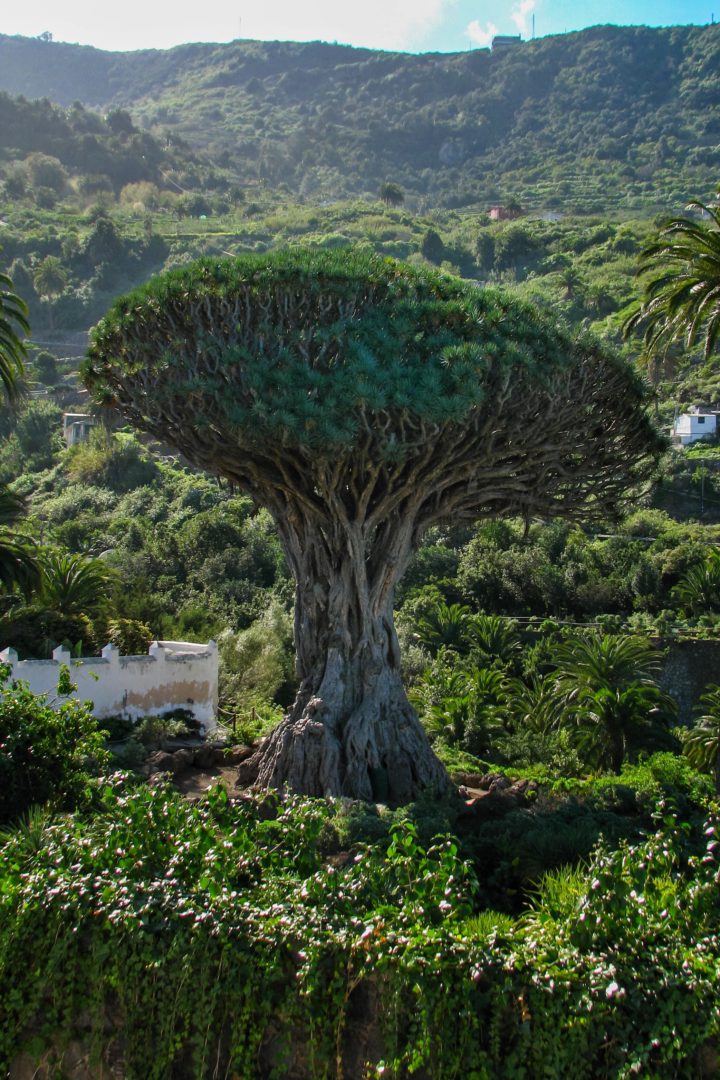 You can also visit a volcanic cave here, Cueva del Viento, more than 11 miles long and thought to be the largest in the world.

If after this you still have some time in your hands, head back to Los Gigantes for sunset, one of the best spots in the island to relax at the end of the day.

Text and Photographs by Teresa Gomez 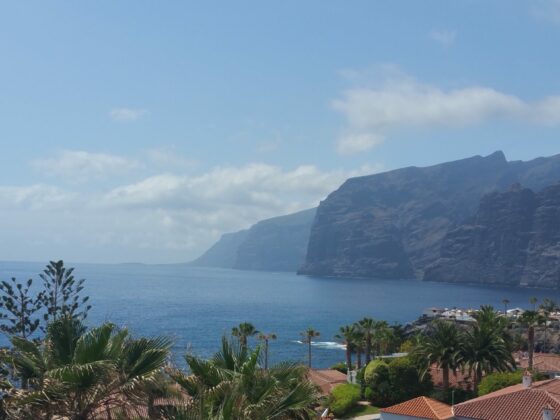 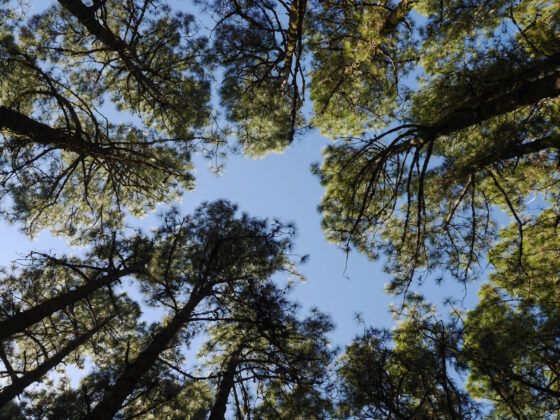